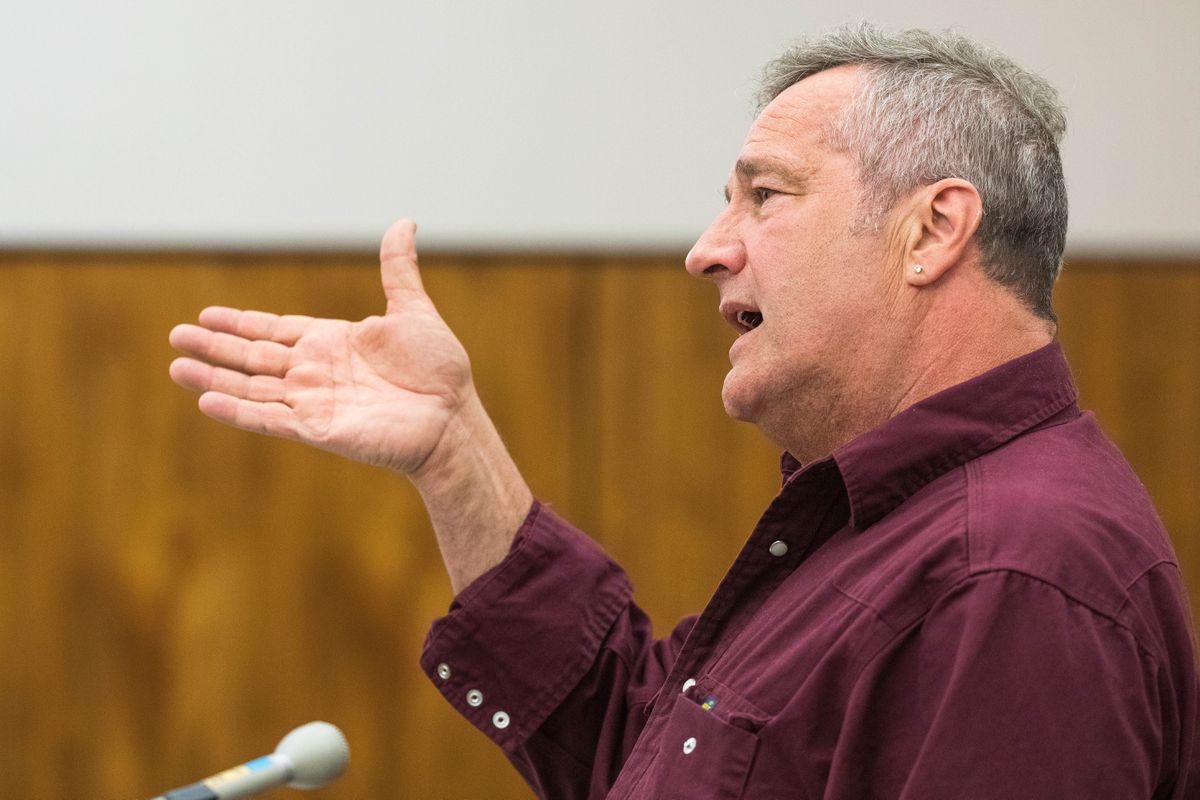 Ron Alleva speaks during his sentencing hearing on May 21. (Loren Holmes / ADN)

Ron Alleva speaks during his sentencing hearing on May 21. (Loren Holmes / ADN)

An Anchorage auction company convicted of spreading a hazardous chemical on the ground last June at a downtown site commonly used by homeless people must pay a $35,000 fine, a judge said Tuesday.

Ronald Alleva, who co-founded Grubstake Auction, must also complete 40 hours of community service and pay $6,500 in cleanup and response costs, according to a sentence handed down on Tuesday by Anchorage District Court Judge Leslie Dickson.

Alleva on June 7 had directed employees at the company to spread Zappit 73, a pool cleaner containing calcium hypochlorite, on the ground within a block of Bean’s Cafe and Brother Francis Shelter last June, the state argued in the case.

Alleva is a longtime critic of the city’s homeless policy whose company owns property in the area. He has said he was trying to provide a public service, using “bleach” to clean up an area polluted by homeless people with human feces, vomit and rotting food.

The state had argued that the chemicals could have blinded people, or even killed someone if they were ingested.

An Anchorage jury last month found Alleva guilty of four misdemeanors, including reckless endangerment, pollution and misuse of a pesticide.

In the courtroom, Alleva described his long effort to battle the homeless problem in the area, with its break-ins and theft at his property. He said he was “sincerely remorseful” and was not trying to be cruel or vindictive. He cried as he told the judge he “won’t do that again, at least not by that procedure.”

The pollution prompted an extensive cleanup and removal of 1,400 pounds of contaminated soil from the site. One individual was sent to the hospital after his jacket was bleached, though ultimately no one appeared to have been injured, Dickson said.

But Dickson said she took into account factors like Alleva’s lack of prior convictions, his past efforts to improve the area including by removing litter, and a history of charitable acts. More than 40 positive letters were submitted on his behalf.

Chris Constant, Anchorage Assembly member for downtown Anchorage, also spoke on Alleva’s behalf, calling for leniency. Constant argued that while he made a mistake, the city and state also share in the blame for refusing to adequately address the city’s homeless problem.

Homeless people with mental health problems are often forced to that area after leaving jail, leading to conflicts with property owners and the Alleva family that owns Grubstake, Constant said.

“The failure is not the Allevas,” Constant said. “It’s all of us driving our problems there and thinking what we’ve done is good and right."