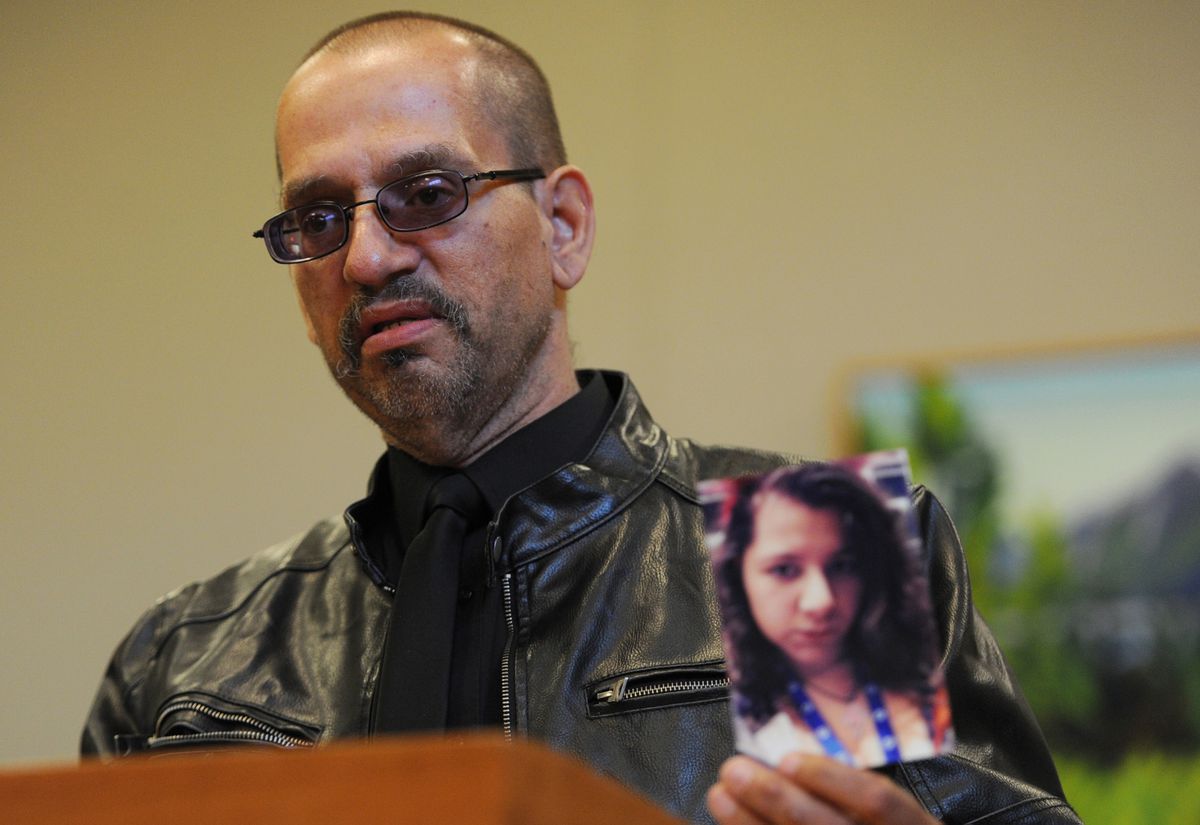 Timothy Hoffman holds a photograph of his 19-year-old daughter Cynthia Hoffman, as he addressed the court in the Anchorage Correctional Complex on Sunday, June 9, 2019. (Bill Roth / ADN)

Timothy Hoffman holds a photograph of his 19-year-old daughter Cynthia Hoffman, as he addressed the court in the Anchorage Correctional Complex on Sunday, June 9, 2019. (Bill Roth / ADN)

Anchorage police have arrested three additional teenagers in the death of 19-year-old Cynthia Hoffman, found shot to death and dumped in a river at Thunderbird Falls near Chugiak on June 2.

Police say they now believe five teenagers were involved in a planned, coordinated attack on Hoffman, whose family has described her as a trusting young adult whose learning disabilities put her at a younger developmental age than her 19 years.

“It was planned. The victim was targeted,” said M.J. Thim, spokesman for the Anchorage Police Department.

The three new arrests announced by police Sunday include Caleb Leyland, 19, who is accused of providing the vehicle used on the day of the killing. Leyland faces charges of first-degree murder and first-degree conspiracy to commit murder.

A juvenile male and juvenile female were also arrested, according to the APD. Their cases are being handled through the Division of Juvenile Justice because of their age, making the details, including their names, confidential.

Denali Brehmer, 18, and Kayden McIntosh, 16, were previously arrested and charged. Police say they drove Hoffman to Thunderbird Falls for a purported hike on June 2, then bound her with duct tape, shot her in the head and threw her in the Eklutna River.

Brehmer and Leyland appeared in court at the Anchorage Jail on Sunday.

The question hanging over all the proceedings was why five Anchorage teenagers allegedly conspired together to kill Hoffman.

The exact nature of the relationship between Hoffman and the five charged in her death has not been described by police. But her family has said she’d been friends with Brehmer for at least half a year, and had only met the others charged more recently.

Police have not established a motive, Thim said.

“That’s another big question, why they targeted the victim,” he said. “This has rattled the community.”

Timothy Hoffman, the victim’s father, said his only hint of a motive is based on posts circulating on social media. He believes jealousy may have been a factor, which has not been confirmed by police.

What he does know, he said, is that his daughter deeply wanted to form social bonds, and to be liked and accepted. Brehmer, at least initially, offered that as a friend, he said.

“Her friend was cool,” Hoffman said. “Cynthia wanted to be cool.”

On Sunday, Brehmer made her first court appearance after her arrest Friday.

In a yellow jumpsuit, her hair in a short blonde cut, the 18-year-old faced a courtroom packed with more than a dozen family members and friends of Hoffman.

Hoffman, clutching a chihuahua named Bruiser he called his emotional support animal, said his daughter considered Brehmer to be her best friend.

Brehmer manipulated the family into believing Cynthia was missing and that she was worried, Hoffman told the court.

“I had a gut feeling,” Hoffman said. “And my gut feeling turned out (to be) right.”

Though the magistrate judge warned her against speaking about the case, Brehmer told the courtroom that she knew “what I did was wrong.”

“I know I could have probably done something different,” she said.

Brehmer also said she has a daughter.

“I don’t want my daughter to know her mom grew up ... a killer because I don’t see myself as one,” she said.

Caleb Leyland, the 18-year-old charged Sunday, seemed dazed during his court appearance. The judge had to ask him several questions twice before he answered.

According to charging documents, Leyland told police that he, McIntosh, Brehmer and the two juveniles had all agreed to kill Hoffman.

The juvenile male and juvenile female also told police that the group had decided to kill Hoffman, the charges said.

The juvenile male said that McIntosh and Brehmer came to his house the night of June 2 and “told him that they McIntosh had shot Hoffman and killed her," according to charging documents.

Police said the two juveniles were taken to McLaughlin Youth Center, with charges forwarded to the Department of Juvenile Justice.

In court, Hoffman said he didn’t know the extent of Leyland’s involvement in his daughter’s slaying. He vowed to show up at every court appearance.

“My daughter trusted these people. My daughter just wanted friends,” Hoffman said. “Now I have to bury her.”