'Nobody can talk about this’: Third teen on trial for Grunwald murder tells his side of the story 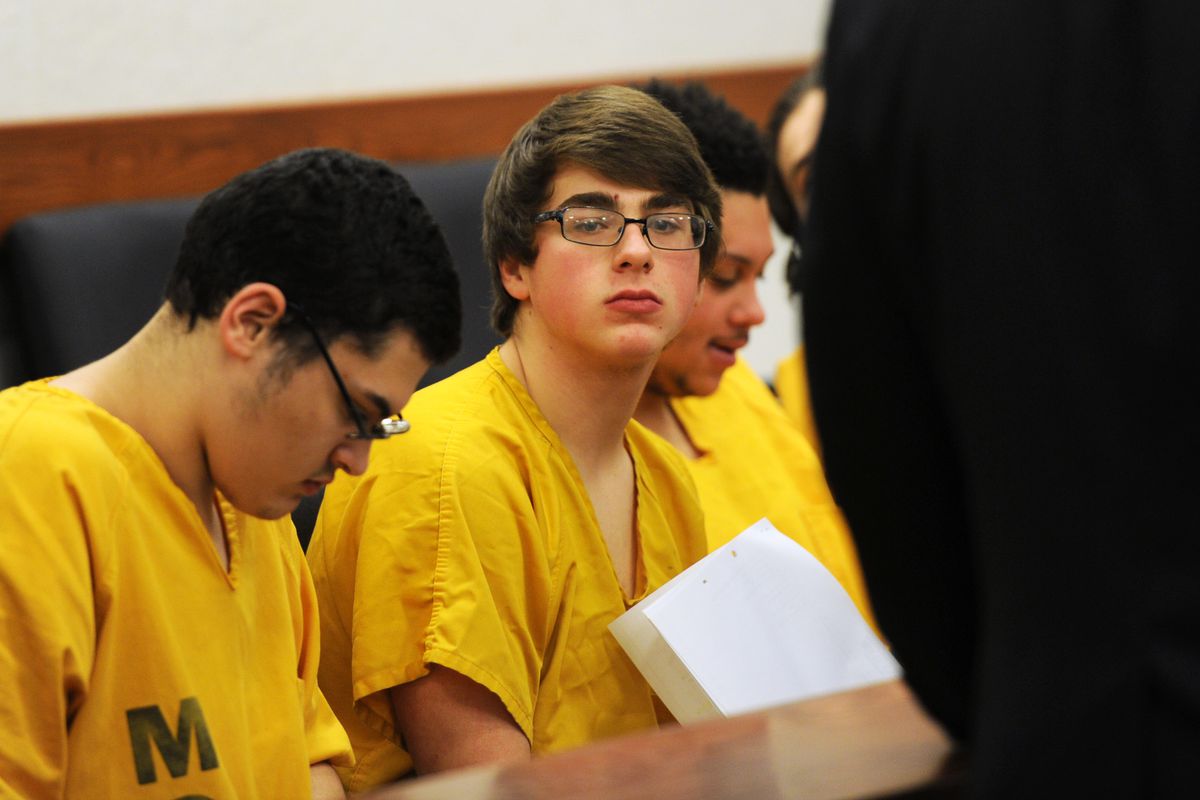 PALMER — Bradley Renfro, one of four Mat-Su teens accused of killing 16-year-old David Grunwald in 2016, took the stand this week to tell his side of the story — and distance himself from the others.

Renfro, 18 now, provided a detailed explanation of the night four loosely supervised teens looking to party were accused of beating and then shooting Grunwald, a popular kid from a military family whom most of them knew only from the hallways at Colony High School.

He also claimed he didn’t directly participate and didn’t break from the group after the murder out of fear.

Authorities say Grunwald came to one teenager’s Palmer home to smoke marijuana and was bludgeoned with a heavy pistol, then driven in his Ford Bronco to a spot near the Knik River and shot in the head. The Bronco was found torched the next day near the Talkeetna Mountains.

Renfro testified that another teen — Austin Barrett, 19 at the time, the oldest in the group, and a party to another murder earlier that summer — threatened to come after him if he told anyone what happened.

“He said that he would kill any of us that talked to the cops about this,” he testified Thursday as his murder trial continued in Fairbanks Superior Court. The trial is being streamed by KTVA 11 News.

Two of the others have already been convicted: Erick Almandinger — the beating occurred in a camper behind his house and his tablet contained damning messages — and Dominic Johnson, who messaged Almandinger about some kind of plan and asked for his gun before the beating.

Barrett faces his own trial after Renfro’s is done.

No messages connect Renfro to Grunwald’s assault and death. Prosecutors acknowledge there’s also no evidence as to which defendant fired the fatal shot, though the gun used was Barrett’s.

Instead, the Palmer DA is applying the legal theory of accomplice liability to argue Renfro and the others, described as wannabe gang members, are guilty of killing the teen by their intentional participation.

Renfro was being groomed as a potential confidential informant but was discredited when he lied about his involvement, an Alaska State Troopers investigator testified. In several profanity-laced interviews, he told troopers he was too drunk to remember what happened and didn’t know where Grunwald was.

Renfro’s attorney, Chris Provost, argues his client accompanied his friends out of fear, though he admits Renfro helped burn the Bronco.

Renfro, who butted heads with his father often, was staying in his girlfriend’s shed at the time of the murder.

He testified that he was in Almandinger’s garage with Johnson and Barrett before Grunwald died.

The trio had been smoking dabs — concentrated marijuana — in the shed before walking to Almandinger’s to get more marijuana and drink stolen alcohol.

Grunwald came into the garage and introduced himself, Renfro testified. Grunwald knew Almandinger from school but didn’t know the others well. He was cordial with the teens sitting in the unlit space. Johnson was guarded, Renfro said. Grunwald asked if he could share the joint they were passing.

It was cold in the unheated garage, Renfro said, so the group broke into the nearby camper. A bottle made the rounds but Grunwald said he couldn’t drink because he was driving. They smoked another joint.

Johnson and Grunwald were on their phones, Renfro said. Almandinger was in the house. Renfro said he lay down on a bunk.

Grunwald got up to use the bathroom, Renfro said. That’s when Almandinger brought out a backpack to Johnson, who grabbed it and blocked the bathroom door with his foot, trapping Grunwald inside.

Johnson let Grunwald out several minutes later, Renfro said, and hit him with a pistol. Then Grunwald dropped and he couldn’t see how many times Johnson hit him. He said he heard Johnson curse and say he’d meant to knock Grunwald out. An autopsy later revealed seven circular gashes in his scalp.

Barrett was standing behind Johnson with his own pistol out, but didn’t hit Grunwald, Renfro testified. Almandinger came back into the trailer to see Grunwald curled up on the bathroom floor, bloody.

Renfro helped Grunwald up and into the Bronco, he said. The injured teen offered up his keys, saying the others could have whatever they wanted.

With Johnson driving, the teens left Palmer and traveled through Butte to Knik River Road.

Grunwald asked to be dropped at home and someone said he wasn’t going home that night, Renfro said.

Barrett said they had to kill Grunwald, who was conscious and heard him, Renfro said. The teen let out a half-shriek. Almandinger told him to shut up. Renfro testified that he’d hoped they could just drop Grunwald off in Sutton or at Jim Creek but “couldn’t bring himself” to tell the others.

“I didn’t understand how this was unraveling so fast,” he testified Friday. “I don’t even know what he did.”

Grunwald leaned his head against the window and started sobbing silently, Renfro said. He couldn’t look at him and didn’t say anything to him.

They drove to the end of Knik River Road, turned around and then pulled into a pullout.

Testimony during the two prior trials indicates the group walked into the trees off the road with Grunwald and, as he faced them, one of them shot him once in the head.

Renfro originally told investigators either Barrett or Almandinger fired the fatal shot, but testified he lied about Almandinger.

As they drove away, Renfro testified, Barrett told them to stay quiet.

“Austin said, ‘Nobody can talk about this. This is serious ...’" he recalled. “If people start talking to the cops, (then) David wasn’t going to be the only one to disappear.”