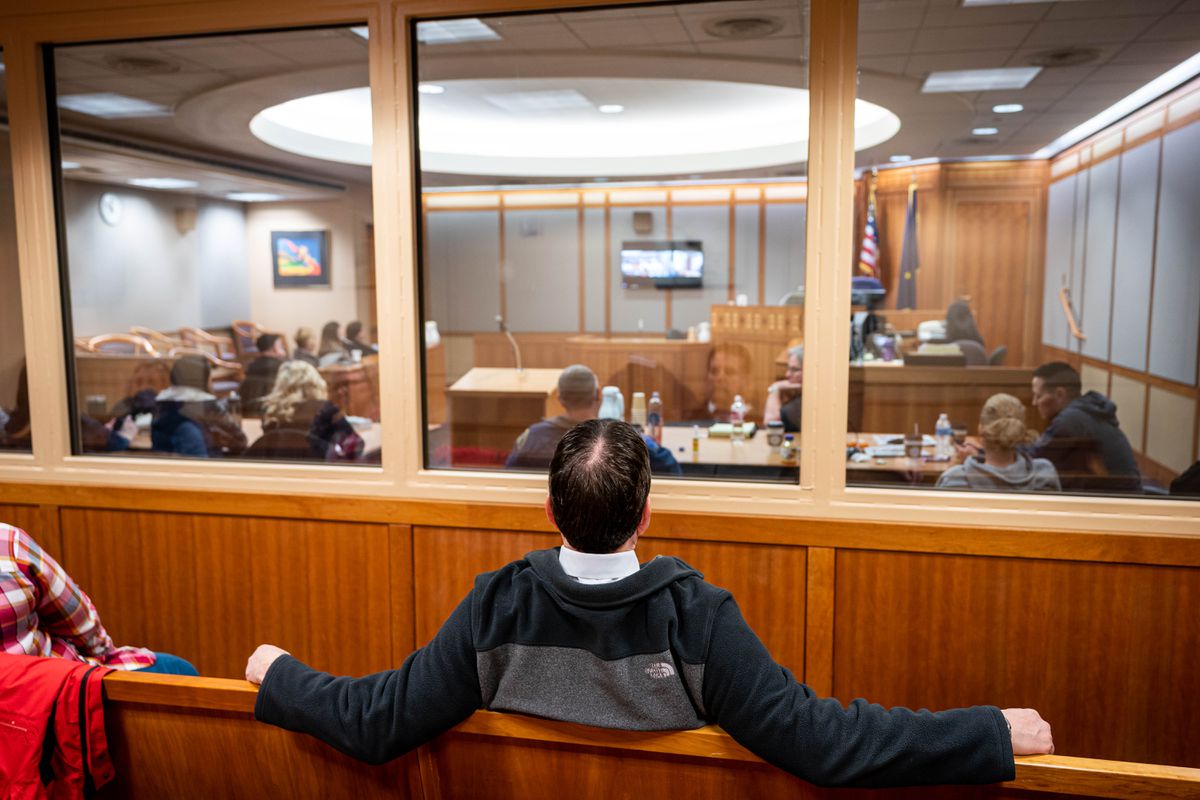 People watch a live video feed of the Anthony Pisano murder trial in a basement courtroom on March 18, 2020 at the Nesbett Courthouse in Anchorage. It was one of the last trials before the system essentially shut down because of the pandemic. (Loren Holmes / ADN)

People watch a live video feed of the Anthony Pisano murder trial in a basement courtroom on March 18, 2020 at the Nesbett Courthouse in Anchorage. It was one of the last trials before the system essentially shut down because of the pandemic. (Loren Holmes / ADN)

Six months into an extraordinary statewide shutdown, the Alaska Court System has announced plans to reinstate jury trials, a complicated task in the midst of the ongoing pandemic.

Like everything else, the coronavirus pandemic halted jury trials in March.

Getting trials operating again is important, Bolger said in an interview: The criminal rule that guarantees Alaska defendants' right to a speedy trial has been suspended since March.

“The protections of important individual rights are not a matter we take lightly,” Bolger said.

In practical terms, the suspension of trials means people with criminal charges pending have either been detained or on community release for six months without the opportunity for a trial, Bolger said. Victims have been deprived of an opportunity for legal resolution and closure. Attorneys, law enforcement officers and witnesses haven’t been able to organize their lives and caseloads around cases being resolved. And the public has lost out on its interest in having “criminal charges resolved fairly and expeditiously,” he said.

For all these reasons, the court system has been studying ways to hold trials in-person for months, he said.

“At this point, we’re ready to use the things we have learned in the last six months to do misdemeanor trials,” he said.

Plexiglass, jurors in the gallery and disinfected microphones

When jury trials resume, a variety of social distancing measures will make the proceedings look and feel different to participants and spectators.

Jurors, instead of sitting elbow-to-elbow in the designated “jury box” may be spread out through the courtroom, sitting in the visitors gallery area to maintain six foot distance. Masks will be required.

Victims, family members, media and other viewers may have to watch trials livestreamed, while sitting in another room, or even on YouTube. Plexiglass may be installed in the courtroom, partitioning off court employees and witnesses. More evidence exhibits may be digitized, so jurors don’t have to handle the same object. Microphones will be wiped down with disinfectant between witnesses or speakers.

Misdemeanor trials are starting first because they are usually smaller and quicker, Bolger said. In general, at least 14-15 people need to be in a courtroom for a misdemeanor trial with a six-person jury, according to Bolger. For a felony jury trial, that number rises to 19-20 people, with a 12-person jury.

By now, a person incarcerated since March awaiting a trial on a misdemeanor charge would be coming close to serving the most extreme sentence they could, by law, get if found guilty: One year, with a guaranteed three months reduced from the sentence for good behavior in jail.

“By the time someone has served nine months waiting for a trial, they have essentially served the maximum (misdemeanor) sentence,” said Stephanie Rhoades, a retired Anchorage District Court judge.

Even if you’re out on an ankle monitor, awaiting trial on a criminal charge comes with a damaging stigma that can lead to the loss of jobs and housing, said Rhoades.

“People charged with crimes are almost in the same terrible scenario as people convicted,” Rhoades said.

Resuming trials will also rely on public’s willingness to answer the call to jury duty.

Getting jurors to show up has proved a challenge in some other parts of the country. In Norfolk, Virginia, around 90 percent of people called to serve on a recent murder trial jury didn’t show up, The Virginian-Pilot newspaper reported.

Cassie Thomas of Anchorage received a jury summons a month ago.

Thomas, a 65-year-old retired biologist who also holds a law degree, says she believes jury service is important but feels the risk is too high for someone her age, even though she’s in good health. She also has questions about courtroom air circulation, asymptomatic co-jurors and whether she’d be allowed to leave if someone seemed ill.

“I am not sure that’s a risk I am prepared to take,” she said.

Judges may consider COVID-19 exposure risks as a reason to excuse someone from jury service, Bolger said. It’s not clear whether age alone would qualify.

“I expect that people who have conditions that make them at increased risk of severe illness of COVID-19 per CDC guidelines would be excused upon request,” he said.

The prospect of restarting trials in rural Alaska also presents its own set of challenges.

Courthouses in small communities are often tiny, one-room buildings that people cram into for a trial under the best of circumstances, said longtime Nome prosecutor John Earthman.

In Unalakleet, the courtroom is so small witnesses wait to take the stand in an Arctic entry and “basically step over the jurors” to enter the room, said Earthman. Local quarantine rules could also impact the ability of case witnesses or other participants to get to the site of trials.

Trials in a handful of rural communities will have to be moved to hub towns with bigger facilities, Bolger said.

In the 2019 fiscal year, there were a total of 298 criminal jury trials statewide, according to Alaska Court System statistics. The number of trials that would have taken place statewide during the period of suspension is “in the hundreds,” said Bolger.

Judges will determine what order cases will go to trial in, with the most urgent, complex, long-waiting cases likely taking priority, he said.

“I’m not discouraged by the backlog,” Bolger said. “The backlog becomes more of an important consideration as time goes on.”

Most criminal cases in Nome, like everywhere in Alaska, resolve with plea agreements rather than trials, Earthman said. But several pending sexual assault cases likely would have gone to trial in Nome this year, as well as at least one major trial out of Kotzebue, have been put on hold due to the suspension.

That’s bad for everyone, from victim to defendant to lawyers to witnesses, Earthman said.

For victims in particular an unresolved case “looms over them,” he said.

But as the pandemic has made clear, that could change.

"Ever since we first started hearing about disease, I’ve learned never to say things are cast in stone,” he said.