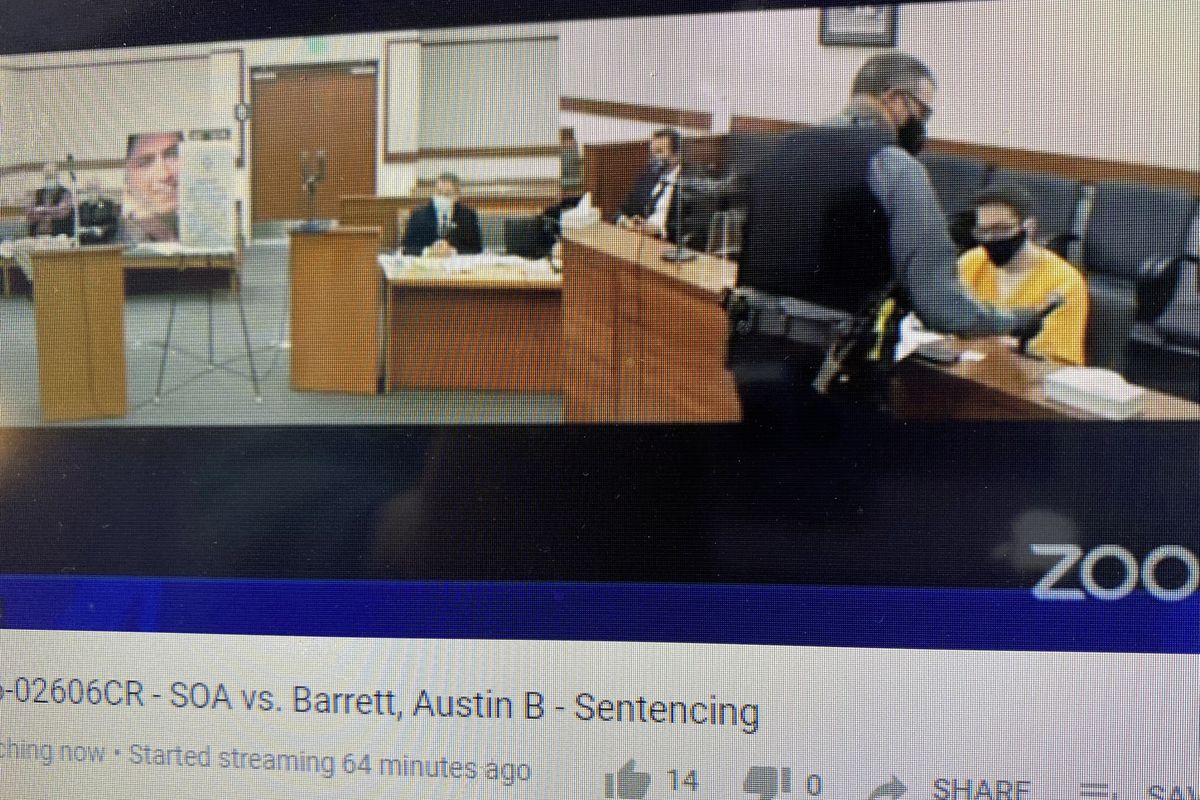 A court services officer fingerprints Austin Barrett, 23, after his sentencing to 45 years in prison for the 2016 murder of 16-year-old David Grunwald Friday, Nov. 20, 2020 in Palmer Superior Court. Grunwald's parents, Ben and Edie, sit next to a photograph of their son. The hearing was streamed on YouTube due to coronavirus precautions. (Zaz Hollander / ADN)

A court services officer fingerprints Austin Barrett, 23, after his sentencing to 45 years in prison for the 2016 murder of 16-year-old David Grunwald Friday, Nov. 20, 2020 in Palmer Superior Court. Grunwald's parents, Ben and Edie, sit next to a photograph of their son. The hearing was streamed on YouTube due to coronavirus precautions. (Zaz Hollander / ADN)

PALMER — The first of four teen defendants sentenced in the 2016 murder of 16-year-old David Grunwald received a term of 45 years in prison during an emotional hearing made surreal by coronavirus precautions.

Barrett was the only of the four to receive a plea deal. Heath earlier this year dismissed the murder indictment against him after ruling troopers violated his right to remain silent during an interview. He pleaded guilty to second-degree murder.

The hearing in Palmer Superior Court was broadcast live on YouTube due to precautions that prevented most members of the public and the media from attending.

Grunwald’s parents sat at one side of the courtroom wearing masks. Two masked prosecutors sat at a table. Barrett sat in the jury box wearing a black mask. His attorney, Craig Howard, sat a few seats away and also wore a mask.

Almost exactly four years ago in November 2016, David Grunwald was beaten in a trailer behind a Palmer home and then driven bloodied and half-conscious to the Knik River in his Ford Bronco, where he was shot and killed. The Bronco was found torched the next day near the Talkeetna Mountains. Grunwald’s body wasn’t found for 19 days.

Evidence presented during the other teens’ trials showed them all partying together after the murder.

Barrett, who grew up with a mother who left the family but a father who provided, left home during a two-year period where his “moral compass was frozen,” Howard said. Barrett was involved in a different murder six months before Grunwald’s.

Barrett had known Grunwald for about 90 minutes before he died.

Juries convicted Erick Almandinger, Dominic Johnson and Bradley Renfro of first-degree murder, but none have been sentenced yet.

“David had entered the devil’s lair and had no idea what was in store for him,” his mother Edie Grunwald said during a lengthy victim’s statement she read to the court Friday. “Ben and I think and we weep about our son getting pistol-whipped and driven to his death.”

She described trips with her son during her time as a National Guard officer, his call when he “accepted Jesus Christ as his savior” at camp the summer before he died, finally getting into the technical school where he hoped to study aviation.

She described his last moments in a poetry of grief: driven to his death, forced into the woods wearing a sweatshirt and slippers, the click of the trigger, one foot left bare by the force of the impact as the others ran off in the night with a few stars peeking through and shadows cast by the moonlight.

“They left his beaten, broken and brain-shattered body there, an empty shell,” Grunwald said.

Her son “was a good kid and not part of this group,” she said, criticizing news media for taking a comment that the beating happened because Grunwald was “smoking all their weed” out of context.

Grunwald said she still wakes up screaming. Her husband, Ben, said he was the first person to touch his son and the last to touch his casket before they put it in the ground.

Before Barrett addressed the court, the Grunwalds left. They didn’t want to listen unless he was going to provide the true story of what happened that night, Palmer District Attorney Roman Kalytiak said.

Barrett apologized to the Grunwalds and all of their family and friends, his family, the community and anyone traumatized by the case. He quoted Revelations.

“I regret what has happened and I realize it was completely wrong,” he said. “I apologize for my actions Alaska and I’m sorry Mr. and Mrs. Grunwald.”

Barrett said he wanted to talk with the couple more “if possible” and he will keep them in his prayers.

Grunwald’s 80-year-old grandmother, who said she suffered heart issues after the murder, and aunt both testified remotely by Zoom. Both asked Superior Court Judge Gregory Heath to hand down the maximum sentence under law.

She told Barrett that she hopes when he wakes up every day “you think about what happened and that drive out there all the times you had a chance to stop and do something.”

It may never be known why the teens killed Grunwald.

Grunwald dropped by Almandinger’s Palmer home on a Sunday night after dropping off his girlfriend and was in a trailer smoking marijuana with the defendants before he was beaten with a heavy gun after coming out of a bathroom, according to prior testimony in the case.

Barrett’s attorney offered his own theories during a rambling statement to the court that veered into his own childhood with a strict military father and various other tangents. He also engaged in the unusual step of picking apart elements of Edie Grunwald’s victim statement.

Howard described David Grunwald as a naive teenager with money and a car who may have inspired jealousy in the others. He also said investigators discovered that Grunwald was sending text messages about marijuana just after going to church the day he died, and that he was rumored to be looking for drugs on the “dark web.”

Howard theorized that Grunwald “imprinted on” Almandinger when the two met as high school freshmen and that acquaintance brought Grunwald into contact with “people not like people you meet in church. You’re running into people who are pretty messed up, who prey on you, who use you.”

In her victim statement, Edie Grunwald said there was no reason in the world for anyone to hurt her son, Howard said.

“That is absolutely right. In her world,” he said. “But David Grunwald was living in two worlds. They had no idea of what he was doing in his other world. And neither did David Grunwald.”

Howard said his comments were directed toward Barrett’s future parole hearing, 11 years from now. Edie Grunwald chairs the state parole board. Howard said he wanted to be on the record in case he wasn’t able to make statements by then, when he will be in his late 70s.

Barrett was also involved in a murder six months earlier. He was in the room with a friend later convicted of killing 16-year-old runaway Frankie Woodford. Barrett agreed to testify before the grand jury in that case in exchange for leniency in this one.

State prosecutors say they can’t prove who pulled the trigger. The gun used belonged to Barrett.

Barrett, the oldest of the four, was named by two of the other defendants as the shooter. But, unlike two of the others, he didn’t engage in social media messaging or have a phone from which investigators could draw evidence. He also stayed behind when the others left to burn the Bronco, according to prior testimony in the case.

Kalytiak said the decision not to take Barrett to trial was made based on the fact it would be the most difficult of the four because of the lack of evidence. He said Barrett’s cooperation in the Woodford case was a factor, and the fact he seemed to show some remorse, unlike the others.

The sentence of 45 years is “still a significant amount of time,” Kalytiak said, adding he’s seen murder defendants get the same sentence at trial.

Toward the end of his remarks, Howard asked the Grunwalds for permission to visit their son’s grave, saying it would be cathartic for him.

“I think I need closure in this case,” he said, adding maybe the couple could email him. “If they don’t want me to do that I fully understand and I will abide by their wishes.”

Ruiz wrote on social media she was “disgusted” by Howard’s attacks on her sister and nephew and promised to attend every parole hearing to make sure Barrett stays in prison “as long as legally possible.