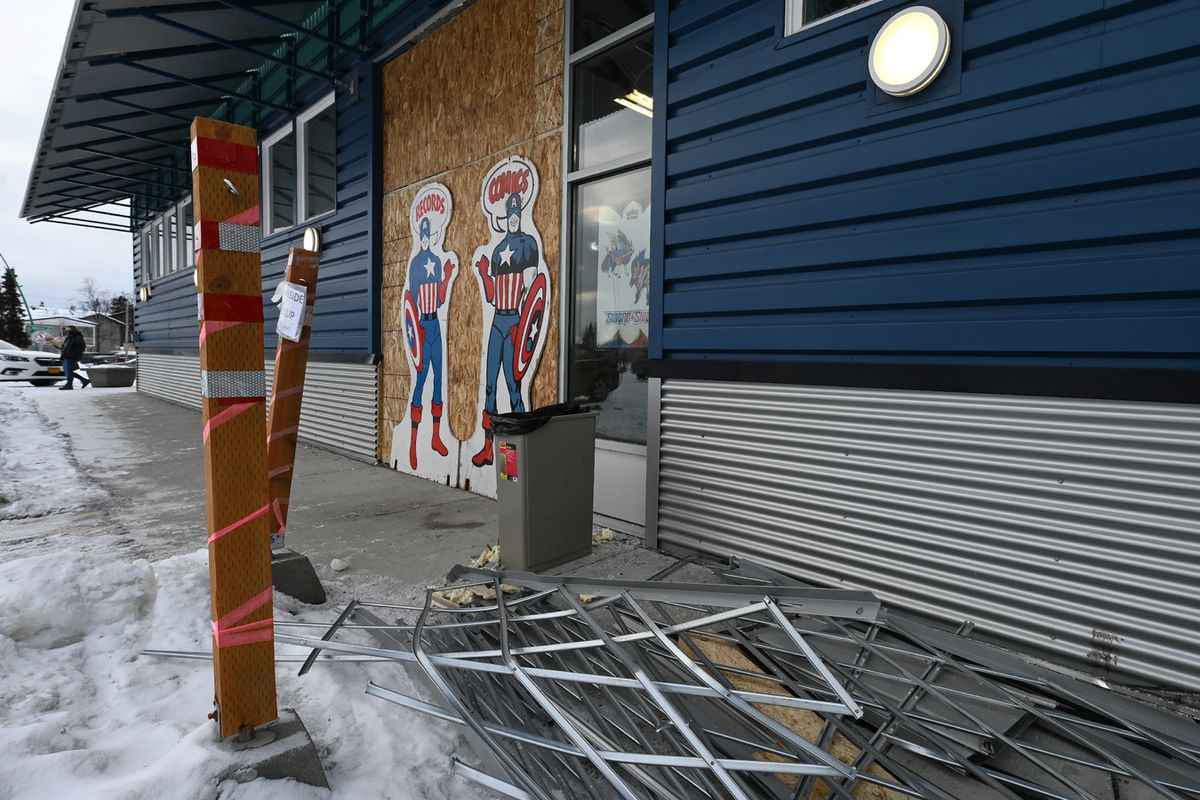 An entrance to Bosco's in Spenard is boarded up after another burglary on Thursday. (Bill Roth / ADN)

An entrance to Bosco's in Spenard is boarded up after another burglary on Thursday. (Bill Roth / ADN)

A string of break-ins at a popular Anchorage game and comic book store started in July, and this week it happened again: A truck on Thursday smashed through an entryway into Bosco’s event room, resulting in a pile of wreckage and broken glass, the store’s owner said.

Anchorage police received a call about the break-in at 12:49 a.m. Thursday, according to police spokeswoman Cherie Zajdzinski-Shirey. Officers are still investigating and no arrests have been made, she said.

It’s the second time a vehicle has been used to break into the store in the last two months. In December, thieves used a stolen car to drive through its front entrance. They made off with sports cards.

It’s the third burglary since July, and there was another attempted burglary in November, owner John Weddleton said.

“You really feel like you’re under attack,” he said.

Weddleton is an Anchorage Assembly member who represents South Anchorage. This month, he also received death threats from an Anchorage man who has been charged in the matter and who is currently in jail.

Curbside, people! Curbside! That means we'll meet you OUTSIDE! I'm sorry, that is as funny as I can get right now. ...

Bosco’s, which has been at its current location in Spenard for six years, has had its share of break-ins over its 37 years in business, Weddleton said. But the frequency and the amount of damage left in the wake of the recent break-ins is a little different, he said.

“It’s a battle, and I’m just trying to get ahead of them,” Weddleton said.

Weddleton said he believes the people who broke in by smashing in a window in July are the same ones who burglarized the place in December because they went after similar items.

On Thursday, the thieves sped away in the same truck they used to smash their way into the store, Weddleton said.

The collision “took down the whole frame,” he said. “The entire structure that the door is in — everything came down.”

The thieves, captured on security cameras, seemed confused once they made it inside, only managing to take a few small items and an empty cash drawer, he said.

“One guy grabbed this little shopping basket, he threw some miniature figures in it and then he dumped it out,” Weddleton said.

There are security gates between each room in the store, which prevented the thieves from getting into areas with more valuable items, he said.

“They got away with some plastic and wooden swords, an empty till and a box of YuGiOh starter decks. So ... totally worth all that risk and damage,” a post on Bosco’s Facebook page said.

Weddleton estimates the damage from the most recent burglary will cost twice as much as the repairs in December, which totaled about $7,500.

The break-ins have forced him to beef up security at the store, he said. Implementing stronger glass after July prevented the November break-in, he said.

Metal bars and grates have gone up on windows and emergency exits around the store, and Weddleton is in the process of installing more.

His only choice now is to install metal gates that come down across the entryways at night, he said. But the gates are unsightly and contribute a negative feeling to the neighborhood, he said.

“There’s cities where that’s the norm, you know. You go into a shopping district and when everybody closes, those gates come down,” he said. “It sends a really bad message. It’s unfortunate.”

Still, crime in the city overall has actually gone down, he said. And Bosco’s is lucky in some ways — it is weathering the pandemic much better than other harder-hit businesses, he said.