Anchorage man argued with homeless people the day before opening fire, killing a woman and wounding 4 people, according to witness and police accounts 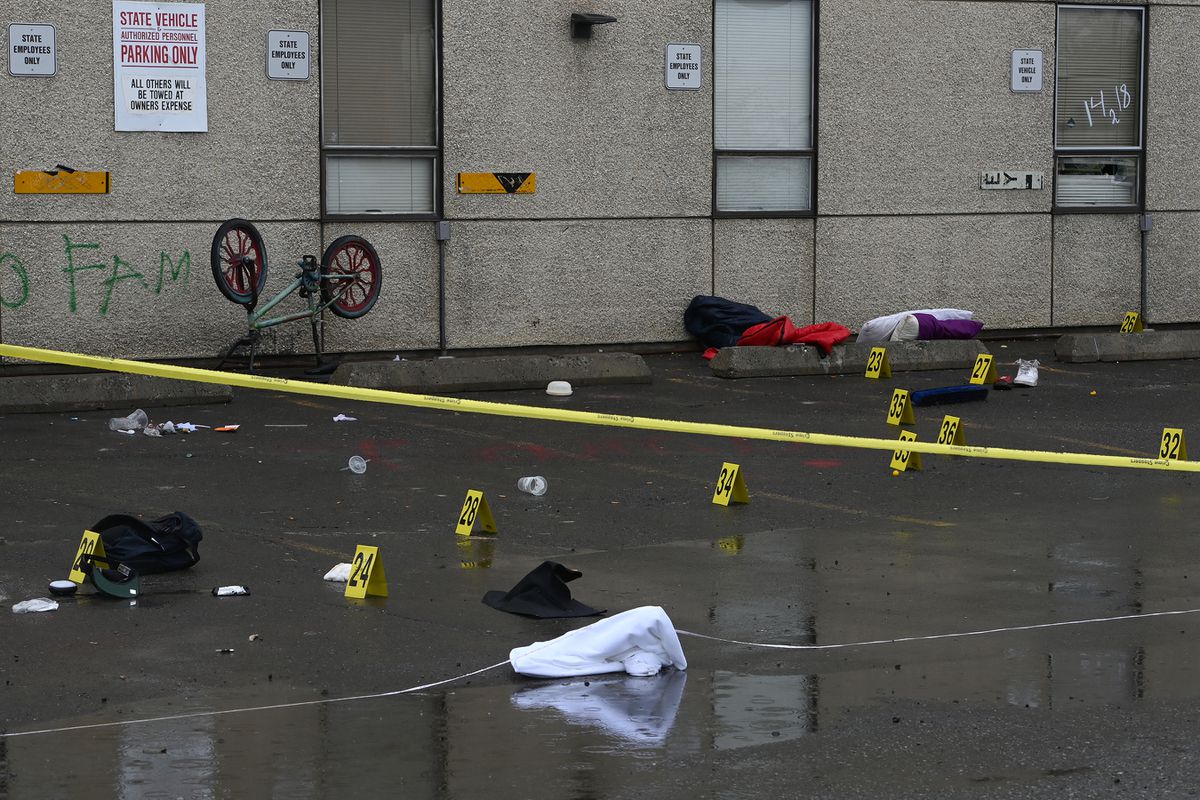 The 21-year-old man accused of fatally shooting a woman and wounding four others near downtown Anchorage early Saturday had argued with a group of homeless people a day earlier before returning to the same area and opening fire.

That’s according to court documents filed with murder charges against Anthony Lee Herring, an Anchorage resident police say was employed at Cline’s Tesoro, a service station on Fourth Avenue and Gambell Street near the scene of the shooting.

Herring was arrested late Saturday on numerous charges, seven of which relate to murder. He later acknowledged to police that he had several weapons including what he called a “baby AR” or assault-type rifle, according to court documents.

Investigators have not disclosed what type of weapon was involved in the shooting.

Killed by gunfire was Jaclyn Welcome, 37, a mother of three boys and three girls, family members said. Welcome, who was born in Anchorage and raised partly in Metlakatla in Southeast Alaska, became homeless about three years ago.

Another woman and three men were treated at the hospital for serious injuries, police said. They remained hospitalized Sunday but their status wasn’t available on Monday. All had surgery, authorities said.

Herring’s girlfriend told investigators that the pair drove to the Tesoro that night and he “complained about the homeless people who gathered there and expressed anger and frustration at them,” according to a report prosecutors filed with the charges. Then, she said, he started firing.

Homeless advocates say some of the victims, including Welcome, were familiar to them.

“It’s a real tragedy for the community,” said Lisa Sauder, CEO of Bean’s Cafe, a longtime Anchorage soup kitchen and provider of services to the city’s homeless population.

This was Anchorage’s first mass shooting — involving four or more people — in the 36 years Chief Ken McCoy has worked for the Anchorage Police Department.

McCoy, in an interview Monday, said police continue to investigate what happened and said there was “some type of altercation” between Herring and the people involved.

“He was frustrated with this group of people and that escalated to violence,” McCoy said. “We don’t believe he was directly targeting them because they were homeless.”

Asked if the shooting constituted a hate crime, McCoy said it was too early to say.

A video posted on social media Friday, the day before the shooting, showed two men, one young and one older, confronting a group of people in a lot next to the service station. Someone who posted the video said the altercation began after a man in the group started throwing knives into a pole next to the station.

The younger man is holding a baseball bat that he uses to threaten a woman who gets near him as he screams profanities at her. “Get the f--- off our property,” he yells at one point to a group of people, and then later, “Get a f---ing life! Get a f---ing job!”

Police are aware of the video, according to APD spokesman MJ Thim.

Herring described himself as homeless when arrested in 2018 on gun theft and later trespassing charges, according to court documents filed in both those cases.

A Cline’s Tesoro representative reached Monday told a reporter the police had “all the information” and declined to comment further.

The shooting was reported around 2:45 a.m. Saturday, when police were called to the intersection of Fourth Avenue and Gambell Street, according to a felony complaint signed by Detective Christina Roberts. Officers found three people shot on the south side of a former state office building at 400 Gambell St. and one victim to the north of the building.

Officers were then called to the nearby Ramada Inn, where a man had walked in with a gunshot wound to the head, Roberts wrote. The man said he had been driving a red sedan; police found it with a bullet hole through the windshield, the complaint said. He later required eye surgery.

McCoy on Monday said APD couldn’t yet say how that vehicle was involved.

“We’re still looking and determining what happened,” he said. “It is possible that he was caught by crossfire and just in the area.”

Witnesses at the scene, meanwhile, described a gray SUV, the complaint said. One recognized it as a Suburban belonging to an employee at the Cline’s Tesoro.

A witness said the driver “had gotten into a verbal altercation the day prior with some homeless people who were throwing knives at a wooden pole,” Roberts wrote.

Herring returned to the area in the Suburban around 2:15 p.m. Saturday, parked and went inside the Tesoro where he worked, the complaint said. An officer still working the crime scene saw the SUV and contacted Herring inside the gas station. Herring confirmed the vehicle belonged to him, and he was taken to police headquarters for questioning.

During an interview with detectives Saturday, he denied involvement in the shooting and said he had been at home after work Friday night, according to the complaint. Police collected surveillance footage from Herring’s apartment building that showed him leaving around 1:45 a.m. Saturday and returning at 3 a.m. with what appeared to be a long gun, the complaint said.

Herring’s girlfriend told police during an interview that they had left the house and were near the Tesoro on Gambell Street and observed homeless people, the charges said. She said Herring had fired shots, the complaint said.

Back in January 2018, Herring was initially stopped for shoplifting $600 worth of groceries at a Carrs store but ended up being charged with stealing a weapon after police found a .22-caliber gun stuffed in his pants.

Herring, who told police he was homeless and needed food, also told them he stole the weapon “from a homeless individual,” according to the complaint filed with that case.

Later that year, he was arrested for trespassing at an abandoned house on East 20th Avenue.

As of Monday evening, he was being held at the Anchorage Correctional Complex on $350,000 cash bail.