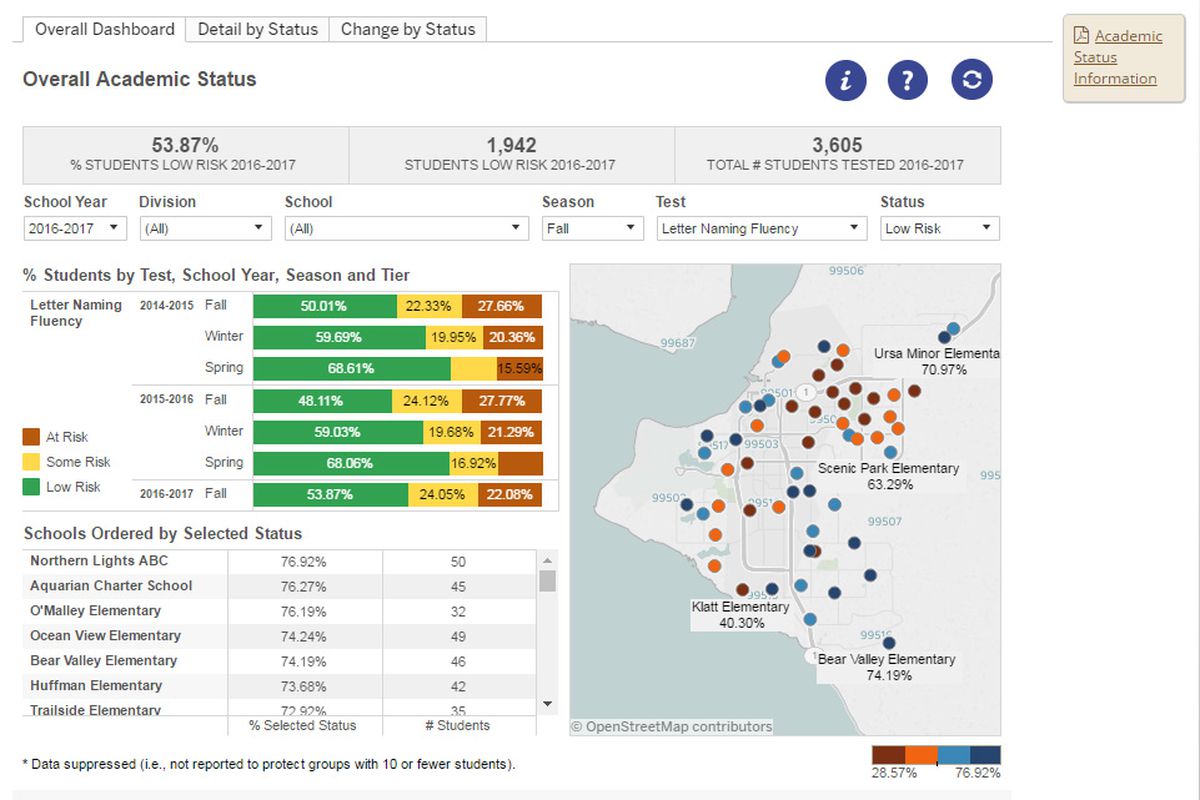 The Anchorage School District has launched a data dashboard where information on academic status, attendance, behavior and other trends in the school system can be seen. (ASD website screenshot)

The Anchorage School District has launched a data dashboard where information on academic status, attendance, behavior and other trends in the school system can be seen. (ASD website screenshot)

The Anchorage School District has turned on public access to new online databases that house troves of searchable information on student achievement and school performance.

School Board President Tam Agosti-Gisler said in an interview Tuesday that the information on attendance, grades, discipline and more will help illuminate problems and achievement gaps within the district. It will also inform school board decisions about where to put more money and resources.

"This is a valuable flashlight, a valuable tool, for everybody in the district and the community," Agosti-Gisler said. The data, she said, "will help us grow."

The databases, referred to as the "data dashboard," include information from the past two school years, as well as the current year. By clicking though the data, a person can break down information by school, grade and race or ethnicity. The information can also be broken down by student groups, including students with disabilities, homeless students and students considered "economically disadvantaged."

District Superintendent Deena Paramo said that the public dashboard suppresses information when there are fewer than 10 students in a group to protect their identities. Principals have greater access to individualized student data.

Paramo said district staff will update the dashboard as new information becomes available. She said she expects data on attendance and suspensions to be updated weekly.

"We're using the dashboard to check ourselves because you have to know it, to grow it," Paramo said in an interview Tuesday. "And then we own it. We own that. We need to change and we're moving forward."

Paramo took over as the new Anchorage superintendent this school year and school board member Patrick Higgins said she wasted no time moving forward with the data dashboard, which the school board had requested last winter. The district's IT department created the dashboard, using data sought by board members that correspond to their "Destination 2020" goals, including having a 90 percent graduation rate by 2020.

Higgins said the new databases have provided timely information and transparency after years of waiting for responses to information requests.

"I like the idea of being very honest with the public," Higgins said. "If you have problems and you can hide them you're not really under pressure to fix them. Once you reveal it you really have an obligation to do something about it."

Brinna Wojtalewicz, president of the Anchorage Education Association, the teachers union, said she hopes the district uses the data to help decide where to put resources. She said she had concerns that the unveiling of the data could turn into finger pointing because of a lack of context around the numbers.

"Many other factors go into these points," she said. "It's open for interpretation once it's open to all of the public."

Principals and teachers have already received access to the data dashboard, Paramo said. In an email to teachers last week, Paramo said that the student data was a set of information that would generate conversations and not be considered a "gotcha" for teachers.

"I want to, as a superintendent, be held accountable to the ultimate mission of kid success," Paramo said.

The Anchorage School District is holding an informational meeting on the data dashboard at 6 p.m. Wednesday at its Education Center, 5530 E. Northern Lights Boulevard. The district has asked people to RSVP. In the meantime, people can access the dashboard at asdk12.org/data.