UAA faculty votes no confidence in University of Alaska president 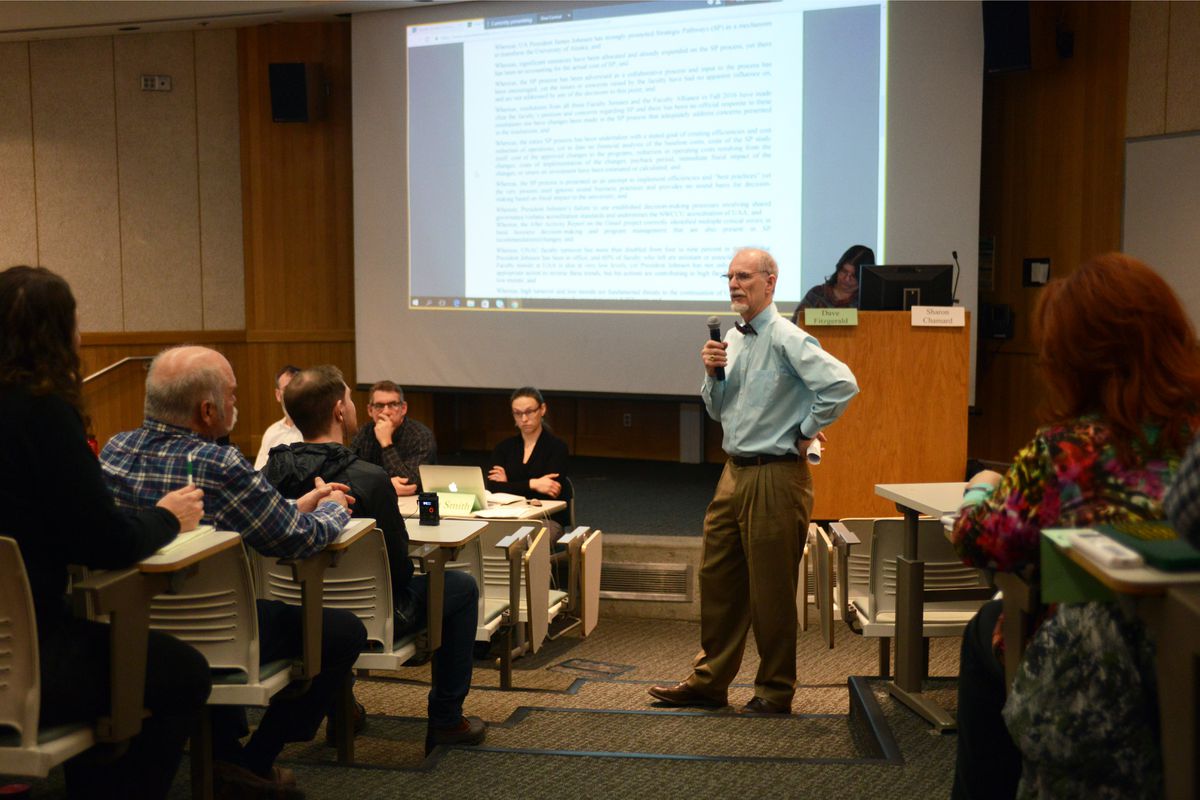 The University of Alaska Anchorage Faculty Senate on Friday voted no confidence in the leadership of the university system president, Jim Johnsen, saying faculty turnover had increased and morale had plummeted during Johnsen's time in office.

The resolution, a non-binding expression of faculty sentiment, was approved 28-9. It said that faculty had been shut out of decisions during the massive, ongoing restructuring of the University of Alaska system, composed of three main campuses.

The restructuring, "Strategic Pathways," started in early 2016 and involves evaluating the sprawling university system's academic and administrative programs to cut costs, reduce duplication and focus on the strengths of each campus.

UAA faculty members said Friday that while Strategic Pathways was advertised as "collaborative," Johnsen failed to take into account their concerns and issues. They also criticized the lack of financial information on decisions made under Strategic Pathways, including cost-benefit analyses, costs associated with implementing changes and estimated returns on investment.

"If we don't do something, if we don't speak up and if we don't find a way to turn this around, they're going to drive us into the ground like a tent peg. This has got to stop," he said. "If it doesn't, then we're going to turn into a wasteland."

UAA Faculty Senate President David Fitzgerald said he hoped Friday's vote sent the message that faculty wanted a change of direction. Fitzgerald told the 80 or so faculty members at the meeting Friday that he wanted to see the problems resolved and wanted Johnsen to stop Strategic Pathways, which faculty did not believe was fulfilling the outcome it was meant to.

"And if he can't do that, step down," Fitzgerald said.

Johnsen became president of UA in 2015.

The faculty senates are elected governing bodies at each main campus.

As of Friday, the faculty senates at UAF and UAS had not yet considered no-confidence resolutions, though they typically don't meet in January, Smith said.

Board of Regents Chairwoman Gloria O'Neill said in an interview Friday evening that regents still had full confidence in Johnsen's ability to lead the UA system.

"I believe this is symptomatic of real change and the messy environment that we find ourselves in," O'Neill said of the no-confidence vote.

O'Neill said she believed Johnsen and his leadership team had reached out to faculty and that regents had received strategic information on the recommendations under Strategic Pathways. She said the regents respected the faculty and their opinions and would discuss the no-confidence vote at their retreat next week.

"All information is important as we make decisions," she said.

Johnsen said in an interview before Friday's vote that faculty were indeed involved in decision-making. He said UA had established monetary goals for the administrative programs reviewed, but the goals for academic programs were quality and access, not necessarily cutting costs.

UA, he said, was also struggling with a budget repeatedly cut by state lawmakers, leading to the elimination of hundreds of positions and added instability among faculty and staff.

"These are tough times and when your budget is cut 14 percent over a two-year period and you walk into a job, it's difficult," he said. "When at the same time the economy is improving across the rest of the country and universities are poaching faculty from here."

Robbie Graham, UA spokeswoman, said in a statement after Friday's vote that Johnsen respected faculty governance, their opinions and their roles in the university. But he had no plans to step down.

"The issues raised are important ones, and we are working hard to manage them appropriately," Graham said. "More importantly, President Johnsen looks forward to working together with the faculty, staff and student for the benefit of the university in the weeks and months ahead."

Correction: An earlier version of this story used the wrong word in a quote from  University Board of Regents chairwoman Gloria O'Neill. O'Neill said the no-confidence vote was "symptomatic" of real change, not "systematic."