‘We are fed up’: Hundreds of Anchorage educators stage walkout at school board meeting 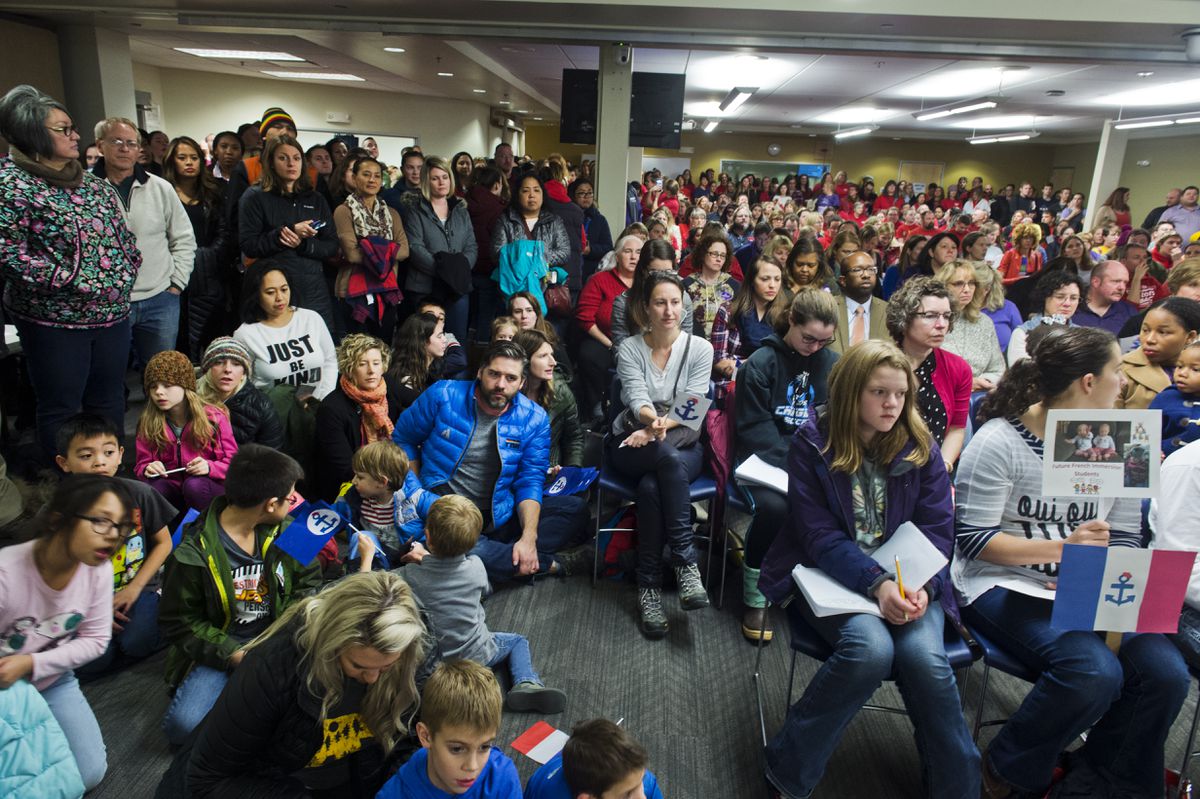 Hundreds of Anchorage educators packed an Anchorage School Board meeting November 5, 2018, the evening before contract negotiations were scheduled to resume between the school district and teachers union. (Marc Lester / ADN)

Hundreds of Anchorage educators packed an Anchorage School Board meeting November 5, 2018, the evening before contract negotiations were scheduled to resume between the school district and teachers union. (Marc Lester / ADN)

Hundreds of Anchorage educators staged a walkout at a school board meeting Monday, the night before contract negotiations were scheduled to resume between the school district and teachers union.

The educators, many wearing red, had crammed into the meeting room, with some spilling out into a common area. They all streamed out of the building after Kadra Peterson, a middle school teacher, spoke to the board during a portion of the meeting reserved for public testimony.

"We are fed up," Peterson told the board.

Educators have come to board meetings for months with concerns, she said, but feel ignored and disrespected. They're not supported by leadership, she said.

"If you want to know what it is like to run ASD without the backbone of educators, this is what's coming," she told board members.

Peterson and the educators — who made up most of the crowd at the meeting — walked out.

The board meeting continued.

The walkout punctuates months of contentious contract negotiations between the Anchorage School District and Anchorage Education Association teachers union. The groups started negotiations in April. They eventually reached a stalemate and called in two federal mediators from Seattle to help. Their first round of mediation didn't yield a tentative contract. The second round of mediation is scheduled for Tuesday and Wednesday.

Meanwhile, the union's roughly 3,300 members — including classroom teachers, counselors and school nurses — continue to work under the terms of a contract that expired June 30.

About Monday's walkout, Anchorage Schools Superintendent Deena Bishop said in an interview: "It was a statement of where they are, which is totally understandable." She said she "looked forward to a positive outcome" over the two days of contract negotiations. However, she added, reaching a contract agreement is complex.

"It isn't simple, but it's a job I hope that we solve because the angst and anxiety — it's present," she said.

The union and district have a list of items to settle before they reach a three-year contract agreement. That includes major parts of the contract such as salary and health benefits. It also includes more intricate changes to contract language.

The walkout on Monday was organized by AK Teachers United, a group that started in May, according to middle school teacher Bryce Purcella, one of the founders. Purcella described the group as a "grass-roots movement" of Anchorage educators who joined together to voice concerns. He estimated between 300 and 400 educators attended Monday's school board meeting, based on the number of handouts distributed.

Educators had packed board meetings before Monday, too, as contract negotiations continue.

At the last board meeting, on Oct. 22., about 35 teachers testified. They spoke about an array of frustrations, including working without a current contract, the loss of the middle school model and limitations imposed by what they described as a "canned curriculum" in elementary schools.

"When have you last seen so many educators at every single board meeting?" Peterson said in an interview after Monday's walkout. "The unrest in the past two years, how do they not see it? How are they not hearing it? How is our superintendent not being demanded to step down?"

In an interview after the meeting, Anchorage School Board President Starr Marsett said she wanted to tell teachers that the board does hear them. She said board members are meeting with teachers and going into classrooms. She said the board has let the administration know that it's concerned about what it's hearing, and administrators are addressing that.

About the curriculum in elementary school, she said: "We're missing the boat in getting our kids where they need to be as far as proficient in reading, so we do have to do something different. But I do believe that sometimes you go from one extreme to the other and that we do have to meet in the middle to make this work — our kids can't wait."

As the school district and the union try to work out a contract Tuesday, Alaska voters will be deciding on candidates, including the next governor, who will influence how the state spends on education. That state funding will, in part, fund the three-year contract under negotiation.

[Tuesday is Election Day. Here's a guide for Alaska voters.]