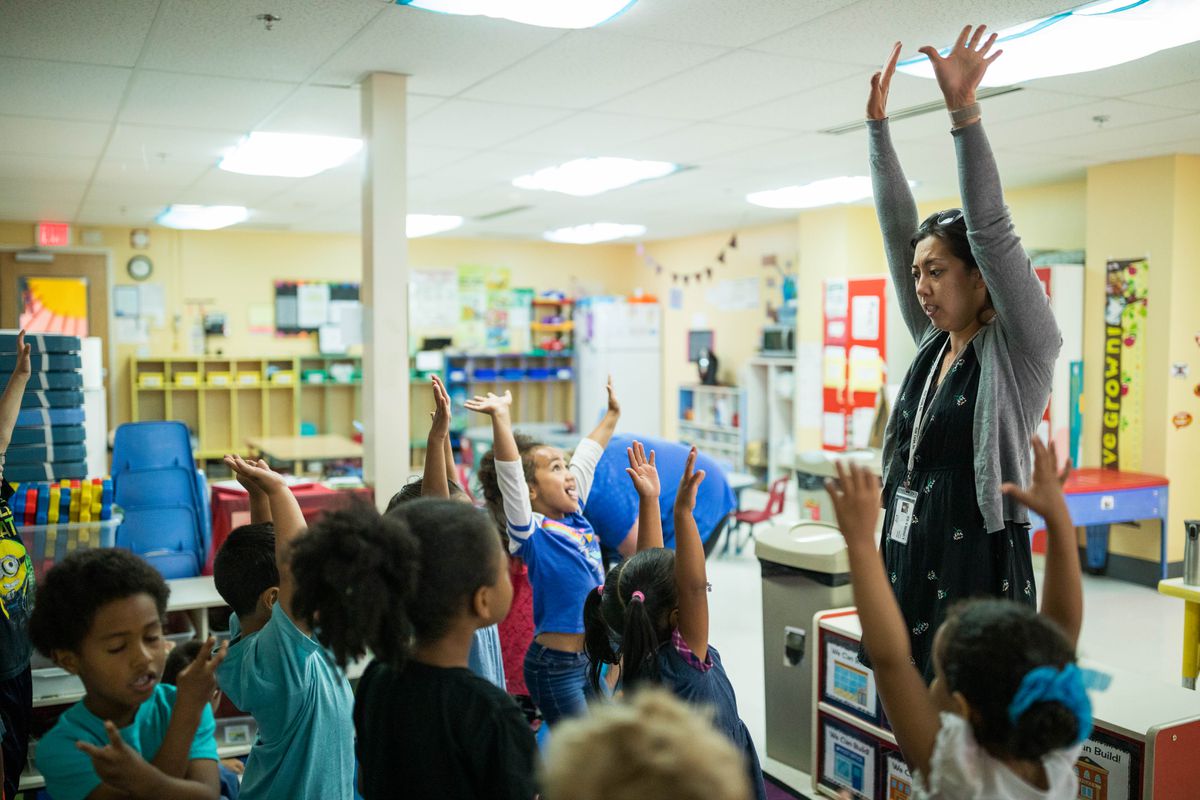 Across Alaska, providers of the Head Start early childhood education program said they’re preparing to close pre-K classrooms, cut dozens of jobs and turn away some 500 of the state’s neediest children after Gov. Mike Dunleavy erased all of their state funding — about $6.8 million.

Some said they’re also scrambling to determine whether the cut will have further budget impacts. The state money is used as a match to help unlock federal dollars.

“We have no idea what will happen,” said Dirk Shumaker, executive director of Kids’ Corps Inc. in Anchorage. Kids’ Corps is part of a network of 17 local organizations that run Head Start programs in Alaska.

Head Start, a federal program, is Alaska’s largest provider of early childhood services. It provides low-income children up to age 5 with free pre-K, meals, medical care and other services. It also provides resources to children’s families.

Shumaker and other Head Start officials said they’re currently in the throes of trying to quickly cut spending, manage the fallout and prepare for the school year, while also keeping a close eye on the Legislature.

In Juneau, lawmakers continue to wrestle with Dunleavy’s 182 line-item vetoes to the state operating budget. The $444 million in vetoes, Dunleavy has said, are part of a two-year plan to balance the budget by cutting spending while avoiding new taxes or reducing Permanent Fund payments to Alaskans. Head Start officials said they’re hoping legislators reverse the budget veto to their program.

The Alaska House this week approved a proposal to reverse 80% of the vetoes, including the cuts to early childhood programs. But the proposal didn’t have the support of the 16-member Republican House minority. Even if the proposal won support in the Senate, it must survive Dunleavy’s veto pen.

Head Start isn’t the only early childhood program that had its funding vetoed last month.

Dunleavy erased $1.2 million in funding for early childhood grants to school districts. He cut all of the state funding for Parents as Teachers, $474,700. The program provides early childhood parent education and family support. Also cut: $320,000 for Best Beginnings, a program that supports early literacy and provides young children with free books.

The governor’s priority is funding “core services,” Shuckerow said. That means funding K-12 education. Some of the other programs “cannot be paid for under the current budget scenario," he said.

There’s still some state funding for pre-K this year, said Erin Hardin, spokeswoman for the Alaska Department of Education and Early Development.

The state is continuing to pay out $2 million for new, competitive pre-K grants to some school districts this year, and $4.2 million to a two-year grant program that started in 2018. At least 23 of Alaska’s 53 school districts will receive some pre-K funding under the grants, Hardin said.

“Alaska is not investing in early childhood education like other states,” Berglund said.

The benefits of early childhood education are numerous and well-established, she said.

The programs can also help close gaps between children from low-income families and their wealthier peers, and keep parents in the workforce, said Allison Friedman-Krauss, assistant research professor at the National Institute for Early Education Research at Rutgers University in New Jersey.

‘That’s a lot of bake sales’

In Anchorage, Shumaker is trying to figure out what to tell families at Kids’ Corps, where the vetoes amount to $818,000, about 18% of its total budget.

“It’s very difficult to plan and implement this kind of cut in that short of time frame," he said.

He’s preparing to cut about eight jobs and 20 of the 260 spots for children. He’ll push back the start of this year’s programs by three weeks, reducing the amount of time children are in classrooms and lowering paychecks.

Questions remain about how many days a week and how many hours a day the Head Start programs will operate, he said.

“We’re in prime recruitment time, and we don’t know what program we’re going to have,” he said.

The federal government pays 80% of organizations’ Head Start costs, but requires them to provide a 20% non-federal match. In Alaska, the match is mostly paid for using state money.

Hardin said Alaska is one of only a few states that provide funds for the match. If there is no state money, Shumaker and other Head Start officials will have to ask for a waiver.

The federal government will decide the consequences, said Mark Lackey, executive director of CCS Early Learning, the organization that runs Head Start programs in the Matanuska-Susitna Borough and Chugiak area.

Lackey said CCS raises money on its own and many people donate time to the organization. But it’s very difficult to raise so much cash so quickly, he said.

“It’s going to be really, really tough to come up with another half-million,” Lackey said. “That’s a lot of bake sales.”

Dunleavy’s vetoes dropped three days before the start of the fiscal year. Head Start providers said they learned of the cuts when they were announced.

The Alaska Head Start Association and Alaska Early Childhood Advocacy Group had requested meetings with the governor, a former educator, after he rolled out his initial budget proposal in February, Baldwin said, but they couldn’t get an appointment.

“There has been no ongoing proactive conversations about the governor’s approach to early childhood," Baldwin said.

The cut means CCS is planning to close its Chugiak location, Lackey said, cutting 15 jobs and ending Head Start access for 60 children and their families.

That includes the Chamberses. Erika Chambers of Peters Creek is a single mother of three children. Two of her children, 3-year-old Chevelle and 9-month-old Jack, were supposed to go to Head Start in Chugiak in early September. Her oldest, 6-year-old Ronnie, already went through the program.

If the program closes, she’s not sure what she’ll do. Chambers said she works full-time, but her income is low enough that her children qualify for Head Start.

The primary criteria for children to be enrolled in Head Start: low income, foster care, homelessness or disability.

“If this cut goes through, I’m going to be very short on money,” Chambers said. She’s been charged as much as $1,600 a month for all three of her children to attend day care, she added.

“Affordable education isn’t easy to come by, especially for people who are at poverty or lower middle class," she said.

Head Start also provides so much more than pre-K, she said, including parent trainings, a food pantry and a focus on community building.

In rural Alaska, Baldwin said, she expects the loss of Head Start will hit even harder.

In some communities, RurAL CAP Head Start is the second- or third-largest employer, she said. Having Head Start means a village has a facility designed for young children, she said. Kids also get some health care there, including hearing and vision screenings.

“I don’t see any alternative for delivering these kinds of high-quality experiences for young children — or even child care placements for working families," she said.

The Anchorage School District’s pre-K programs are not directly impacted by the governor’s vetoes, said district superintendent Deena Bishop. But she expects the impacts will be felt in Anchorage classrooms when more kindergartners arrive less prepared because of lost access to pre-K.

Pre-K, Bishop said, “is one of the supports that provides equity and equalizes the playing field for kids not born into a higher socioeconomic ZIP code."

Here are some of the expected, statewide effects of the cuts to early childhood education:

• Statewide, there will be 500 fewer children enrolled in Head Start programs and 130 fewer jobs, says the Alaska Head Start Association. In 2017-18, Alaska Head Start served 3,930 children across more than 80 communities. The wait list of eligible children ages 3 to 5 recently totaled about 650.

• About 10,000 Alaska children will stop receiving early literacy help, including a free book each month, through Best Beginnings, said executive director Abbe Hensley. As of June, about 18,500 children participated statewide, she said. This week, the program stopped accepting applications from Anchorage families.

• The Parents as Teachers programs will end in Haines, Kake, Kodiak and Anchorage, cutting services to at least 120 families, Baldwin said. Juneau will retain some services under a federal grant, she said.