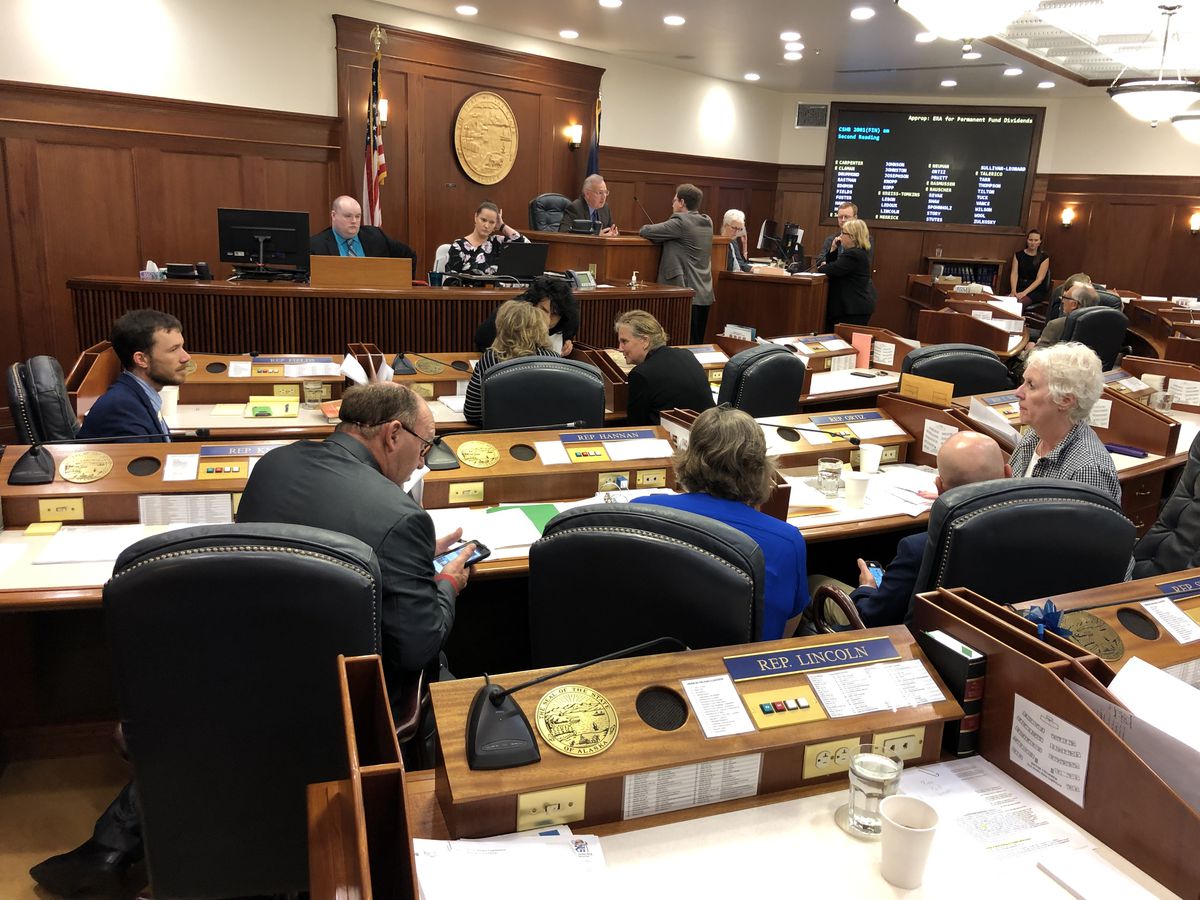 Members of the Alaska House of Representatives are seen during a break before the final vote on House Bill 2001 on Wednesday afternoon, July 24, 2019. (James Brooks / ADN)

Members of the Alaska House of Representatives are seen during a break before the final vote on House Bill 2001 on Wednesday afternoon, July 24, 2019. (James Brooks / ADN)

JUNEAU — The latest round of negotiations in the Alaska House of Representatives has failed, continuing the state’s leadership and fiscal deadlock.

Despite a daylong session of stairway diplomacy Tuesday, the 23 members of the House’s coalition majority did not reach an agreement with the 16-member Republican House minority to resolve what Speaker of the House Bryce Edgmon, I-Dillingham, calls the “four spears”: the lack of a Permanent Fund dividend, the lack of a completed capital budget, the lack of a “reverse sweep” vote and Gov. Mike Dunleavy’s unilateral decision to veto $444 million from the state’s operating budget.

Without agreement on those four items, Alaskans across the state risk social and economic effects that threaten to return the state to recession.

Following the collapse of talks between the House’s two main groups, the coalition majority on Wednesday approved a proposal to reverse roughly 80% of the governor’s vetoes and in a 21-10 caucus-line vote, sent the proposal to the Senate for consideration. Nine legislators were excused absent.

“I think they’re opening up the door for another disagreement on what’s in this bill,” said House Minority Leader Lance Pruitt, R-Anchorage.

[As Alaska’s budget uproar rolls on, Dunleavy adviser Donna Arduin has seen it before]

Known as House Bill 2001, the proposal faces long odds without the support of the House minority. Even if the Senate approves the idea, Dunleavy could simply veto it.

“What’s going to happen with this bill? Is there anybody in this room who does not believe that unless a deal is struck, that these items are going to be vetoed again?” Rep. Gabrielle LeDoux, R-Anchorage, asked rhetorically.

[Your support makes coverage of the Alaska Legislature from Juneau possible. Subscribe now.]

With 45 of the Legislature’s 60 members required to override any veto — the highest such hurdle in the nation — the minority’s support is necessary as long as its members and the governor are aligned.

That remains the case.

“It’s very difficult to get to 45 votes, and clearly the House minority and six senators are working with the governor,” Edgmon told reporters Wednesday evening.

The minority consists of 16 Republicans and the majority includes a mix of Republicans, independents and Democrats. LeDoux is the only lawmaker who is not a member of either group.

Rep. Andy Josephson, D-Anchorage, said on the House floor that he believes public outcry may have changed the governor’s mind, and if not, “It’ll be on the shoulders of one individual, and if he hasn’t heard what I’ve heard, then he’s just not listening.”

The collapse of Tuesday’s talks came after the two wings of the House failed to agree on the amount of this year’s Permanent Fund dividend. The minority has remained steadfast behind the idea that this year’s dividend should be $3,000, paid according to the traditional formula in state law.

The majority rejects that idea, because paying a traditional dividend at current levels of spending — even if the governor’s vetoes were upheld — would require breaking a law signed last year to limit spending from the Alaska Permanent Fund to sustainable levels. The majority has variously proposed a $900 and $1,600 dividend as an alternative.

“This is our first year of the structured draw, and folks, we’ve got to have a balanced budget,” said Rep. Jennifer Johnston, R-Anchorage.

House Bill 2001, when introduced last week at a finance committee meeting in Anchorage, included a $900 dividend and reversed all of the governor’s vetoes. In Juneau, it was rewritten to propose a $1,605 dividend and the reversal of most of the vetoes.

After negotiations collapsed, the dividend was stripped from the legislation. It is now advancing as a separate bill, House Bill 2003, which faces a vote Thursday in the finance committee and then in front of the full House.

Rep. Sarah Vance, R-Homer, tried to add a $3,000 dividend to HB 2001 on Wednesday. Despite impassioned speeches by herself and other members of the minority, the idea failed 11-20, with Rep. Chris Tuck, D-Anchorage, joining the minority and LeDoux in voting yes.

“I will not waver on this issue. I may be the lone woman standing here on this issue, but I believe Alaskans deserve to have the conversation on the Permanent Fund dividend,” she said.

Talking to reporters, Edgmon said a tentative compromise proposal on the dividend has been thwarted by the governor. That proposal involves agreement on a $1,600 Permanent Fund dividend, then an additional $1,400 payment if lawmakers agree on a change to the dividend payment formula.

Dunleavy controls the agenda of the special session, and he has not been willing to allow legislation to change the formula, Edgmon said.

In other business: Senate Bill 2002, which would address the reverse sweep and capital budget, has already approved the Senate and has the support of some minority members of the House. Thirty votes are needed to approve the bill in the House, however, and two votes on the legislation have failed to reach that mark. A revote, held Tuesday, failed with 29 votes in favor.

“We are making every effort to make sure we have 30 votes before the ... motion will come back on the floor. It’s a critical piece of legislation, and it needs to be done right,” Edgmon said.

He said that could take place Friday or Monday.