‘A lot less hangry’: Some Anchorage elementary schools are measuring the impacts of a longer lunch and recess 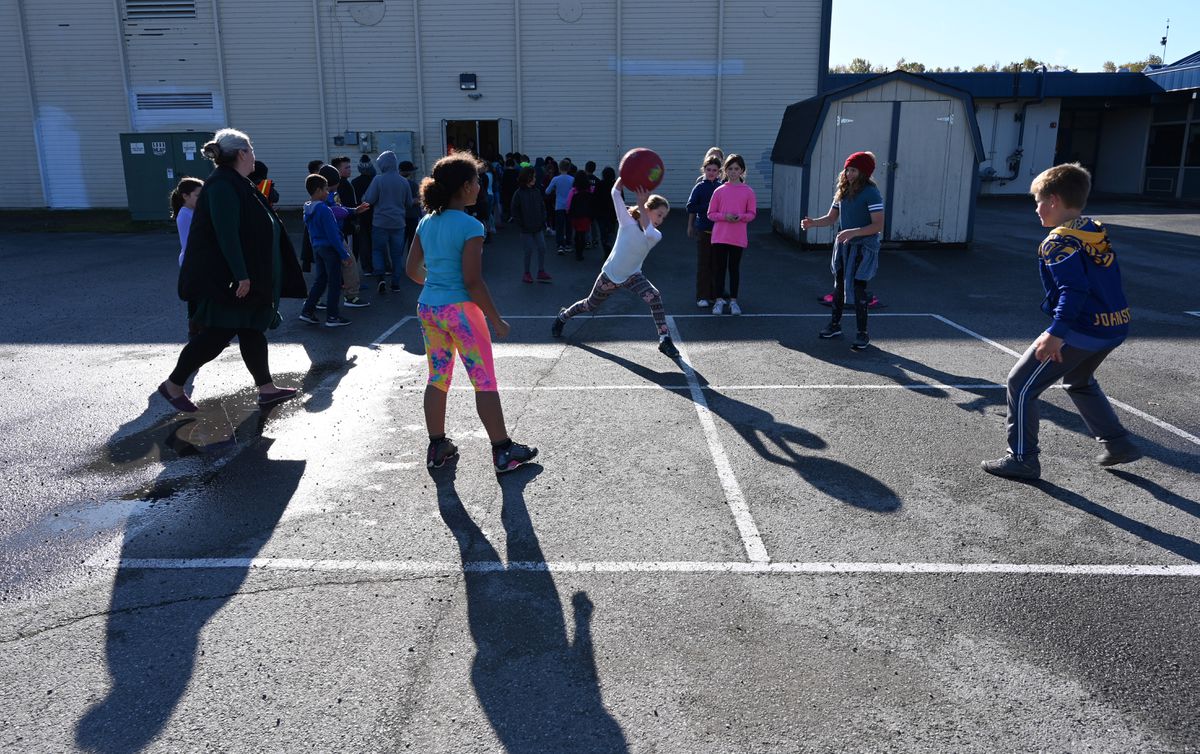 A group of fifth graders play a spirited game of four square during recess at Rogers Park Elementary School, Sept. 26, 2019. Under a new pilot program, they have 30 minutes for recess this year, 10 minutes more than a year ago. (Anne Raup / ADN)

A group of fifth graders play a spirited game of four square during recess at Rogers Park Elementary School, Sept. 26, 2019. Under a new pilot program, they have 30 minutes for recess this year, 10 minutes more than a year ago. (Anne Raup / ADN)

For about three years, Kelly Lessens often opened her daughter’s lunchbox after school to find a half-eaten sandwich, uneaten apple or barely touched carrots. Her daughter, Olivia, said she didn’t have enough time to eat all of her food during the 20-minute lunch period at Anchorage’s Trailside Elementary School.

“I’d meet her at the bus stop and she’d be so hangry,” Lessens said. “She’d sit on the curb and mow down whatever snacks she could.”

Lessens said she felt frustrated, and found she wasn’t alone.

Lessens teamed up with other parents last year to campaign for more time for lunch and recess at Anchorage School District elementary schools. They had concerns about too little play and the limited time that students at the end of the lunch line had to eat. They also worried about the impacts of the silent time imposed during some school lunches to keep children focused on chewing instead of talking, Lessens said.

The parents started an online petition that got more than 6,000 signatures. They called for change from the Anchorage School Board. A new pilot program emerged from their efforts, and it started this school year.

This fall, 21 of Anchorage’s neighborhood elementary schools — about one third — have opted to join the pilot, including Trailside Elementary. They’re measuring the impacts of giving students more time to eat and exercise during the school day to inform future school board decisions, according to the district.

There’s currently no district-wide standard for the length of lunch. District regulations say elementary schools should set aside a block of at least 45 minutes for lunch and recess, leaving decisions about how to divide up that time to principals.

Under the new pilot program, called the “Wellness Initiative,” there are more specific guidelines, according to the district:

• Students are guaranteed 30 minutes for recess each day, either all at once or spread out.

• They have at least 20 minutes to sit for lunch. (That means not standing in the lunch line or walking in the hallway on the way to the cafeteria.)

• The schools are also focused on providing students with 54 minutes of physical activity each day. (That’s 90% of the daily recommendation from the Centers for Disease Control and Prevention.)

So far, supporters of the pilot program say ensuring students have enough time to eat and exercise leads to improved outcomes, including better classroom behaviors. But some have also raised concerns about trying to find more time for lunch and recess in an already-packed school day.

“Squeezing everything into a six-and-a-half-hour day is becoming next to impossible,” said Rogers Park Elementary School Principal Nuri Johnsen.

Rogers Park Elementary is one of the schools in the pilot program.

On a recent weekday afternoon at the school, tucked in a quiet neighborhood, a tangle of conversations filled the cafeteria for third grade lunch. Outside, a class sat clustered together to eat. Nearby students played four square and ran through the playground.

Sixth graders Maggie Metcalfe and Elise Richotte sat together at the bottom of a slide. They said they love having a longer lunch so they can talk with their friends. Richotte said she felt rushed last year.

“I felt like we’d sit down and I’d start a conversation with my friend and next thing I know, ‘OK, five minutes to the end of lunch,’ and I hadn’t eaten anything,” she said.

But, she said, “I’m kind of over recess,” so she didn’t need more time.

Inside, while packing up the remnants of a Lunchables tray, third grader Tucker Tebo said he really liked having more time to play tag and go on the monkey bars.

“I focus better when I have a little more recess,” he said.

Mari Sweeney, a fifth grade teacher in the highly gifted program, said the pros of the pilot program seem to outweigh any cons so far.

She said she finds students are eating more of their lunch and are focused when returning to classwork after their “brain breaks” — bursts of exercise either inside the classroom or outside to meet the 54-minute guideline.

“Though a con is that it takes away more class time, they seem a little bit more motivated to come right back in and get right back to work since they did have that play time,” she said.

Johnsen said teachers are most often taking time from language arts, science or social studies lessons to accommodate the added lunch and play. Asked if it’s worth it, she said: “I’m still on the fence.”

The American Academy of Pediatrics recommends that students get at least 20 minutes to sit down and eat their lunch. But there are no national requirements for the length of lunch.

It’s an important issue, said Juliana Cohen, adjunct assistant professor of nutrition at the Harvard T.H. Chan School of Public Health and assistant professor at Merrimack College. Some studies have found that students at the end of lunch lines had as few as five minutes to eat their meals, she said.

“This can have really important implications, both for overall health and also for the potential academic success as well,” she said.

Also, too-short lunch periods often hit students from low-income families the hardest, she said. Those are the students who qualify for free- or reduced-price lunches, and often must wait in lines for food instead of heading straight to the lunch tables with their packed meals. They also rely on school meals for half of their daily energy intake, she said.

Across the Anchorage School District, about 38% of students qualify for free or reduced-price lunch.

The school district, with the help of Cohen, will evaluate the effects of the pilot program, said Melanie Sutton, the district’s health and physical education curriculum coordinator. She said they’ll analyze reading scores, student behaviors, scheduling and more.

That data will inform a report to the Anchorage School Board around December and aid in decisions about whether to cement all or part of the pilot program into policies or guidelines.

Lessens said she’s hoping the board decides to enshrine the program into policy and also adopts uniform “best practices,” including encouraging socializing over silence at lunch. If only some schools make the shift, she said, she worries about the inequities created.

Already, she said, she sees changes in her daughter as a result of the 25-minute lunchtime and 30-minute recess.