‘Going old school’: Anchorage school lunches are getting a makeover 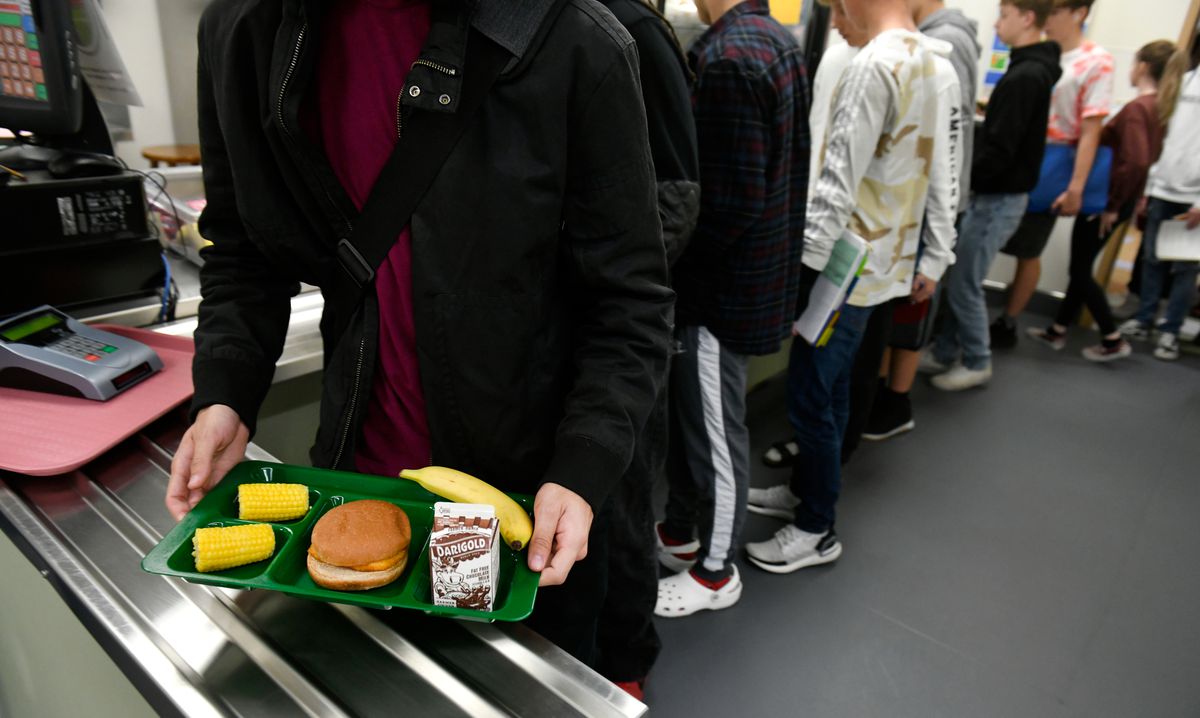 A Service High School student carries a lunch tray on Oct. 2, 2019. Service is one of the Anchorage School District schools that are using reusable trays instead of prepackaged disposable ones. (Marc Lester / ADN)

A Service High School student carries a lunch tray on Oct. 2, 2019. Service is one of the Anchorage School District schools that are using reusable trays instead of prepackaged disposable ones. (Marc Lester / ADN)

The Anchorage School District is moving away from prepackaged TV-dinner-style lunches served in throw-away plastic trays in an effort launched this year to reduce trash and increase the appeal of student meals.

Instead, cafeteria workers will scoop food directly onto students’ reusable trays as they move through the lunch line, said Andy Mergens, the district’s senior director of student nutrition.

It’s a big transition for a decades-old system, Mergens said. He likened it to “going old school.”

The transition is rolling out in phases across the school district. It started with a pilot program at Service High School in March and expanded to another six high schools and middle schools this fall.

The goal: Eventually outfit 82 Anchorage school kitchens with the equipment to wash trays and dish out food, Mergens said. For some, that will take more work. All schools will need new reusable trays and utensils, and many will also need dishwashers and steam tables, he said.

Mergens estimated that the transition will take at least another five years. It will cost roughly $1 million for the appliances and related building modifications, he said. That doesn’t include any major construction projects that could arise, he said, like knocking down walls to expand tiny school kitchens.

“This is a huge plan with a lot of intricate moving parts that are all kind of interconnected and interwoven,” Mergens said. “It’s going to take time.”

Across the country, there’s a lot of variety in school districts’ systems for preparing student lunches, said Diane Pratt-Heavner, spokeswoman for the national Student Nutrition Association. Some have a central, district kitchen preparing the meals, some have that work done in school kitchens and others do a combination of the two, she said.

“It’s about what works best at the local level,” she said.

The Anchorage School District is the single largest daily meal service in Alaska, Mergens said. Every day, it feeds about 18,000 students lunch and 10,000 students breakfast.

Its system of sending prepackaged meals to schools started roughly 30 years ago as a way to quickly move kids through lunch lines.

[‘A lot less hangry’: Some Anchorage elementary schools are measuring the impacts of a longer lunch and recess]

The meals are packaged to varying degrees at a cavernous student nutrition building in South Anchorage.

On a recent weekday morning, student nutrition staff in hairnets put carrots and broccoli into one side of a plastic container and applesauce into the other side. A machine encased the containers in a plastic film. The same assembly-line procedure is used for foods that need to be reheated.

The meals would be shipped to elementary school kitchens.

The system is more decentralized for middle and high schools, with school staff usually portioning food into plastic containers or onto paper plates at the individual cafeterias, Mergens said.

It all leads to a lot of trash, he said.

All together, school breakfast and lunch result in up to 18 tons of paper plates going to the landfill each year, and 40 tons of plastic trays, Mergens said.

The system poses other issues too. Condensation often develops when the trays covered with plastic are heated, leading to soggy food. Also, since the food is heated at the same temperature (think chicken nuggets and broccoli), the reheating usually leads to limp, overcooked vegetables, Mergens said.

“Part of the complaint from parents is, it looks ⁠— and it is ⁠— like a TV dinner,” he said. “It just has that connotation of processed, prepackaged, just ‘meh.’”

Mergens said he wants to let parents know: “We understand this is not the greatest system in the world. It’s fast, it’s quick, it gets kids through really, really fast. But quality suffers, appearance suffers, sometimes that taste isn’t real great and we want to change that.”

Under the new model, staff in school kitchens will warm that day’s main dish and sides separately. The food will stay warm in steam tables and students can pick which items they’d like, Mergens said.

The district is first making the changes at schools that already have the kitchen space and equipment, so elementary schools will likely be the last to transition to the new system, Mergens said.

At Service High on Wednesday afternoon, students streamed through the lunch line, grabbing a slice of pizza or a sandwich, and corn or a banana, and carrying the food away on green-colored trays.

Some students said they felt indifferent about the trays, while others said it seemed like a good idea to reduce trash. Freshman Shelby Whitt said she hated the throw-away plastic trays in elementary school. They were difficult to hold and the pre-packaged food limited choices, she said. She was happy to see change.

“I think it’ll be better for the kids, but I’m also a kid so I don’t know the impact money-wise,” she said.

Mergens said he expects the costs to implement the changes will eventually be offset by savings, including less trash hauled away and less plastic and paper purchased. Reducing food waste should also save money, he said.

The money for the school lunch overhaul will come from the student nutrition budget, and a recent grant will also help cover some of the costs, he said. (The school meal program is paid for partly by revenue from lunch sales and partly by federal government reimbursement.)

Romig Middle School will be next to transition to the new system in early 2020, with the help of a $20,000 grant from UnitedHealthcare that will pay for a dishwasher, trays and other equipment, Mergens said.

As the transition continues, Mergens said, he also hopes to swap out plastic utensils for reusable cutlery. He wants to incorporate more Alaska-grown products, and set up composting systems at schools.

“We want to fundamentally change how we serve lunches,” he said.

Correction: An earlier version of this story incorrectly identified the health care company that gave a $20,000 grant to the Anchorage School District. It was UnitedHealthcare, not Vera Whole Health.