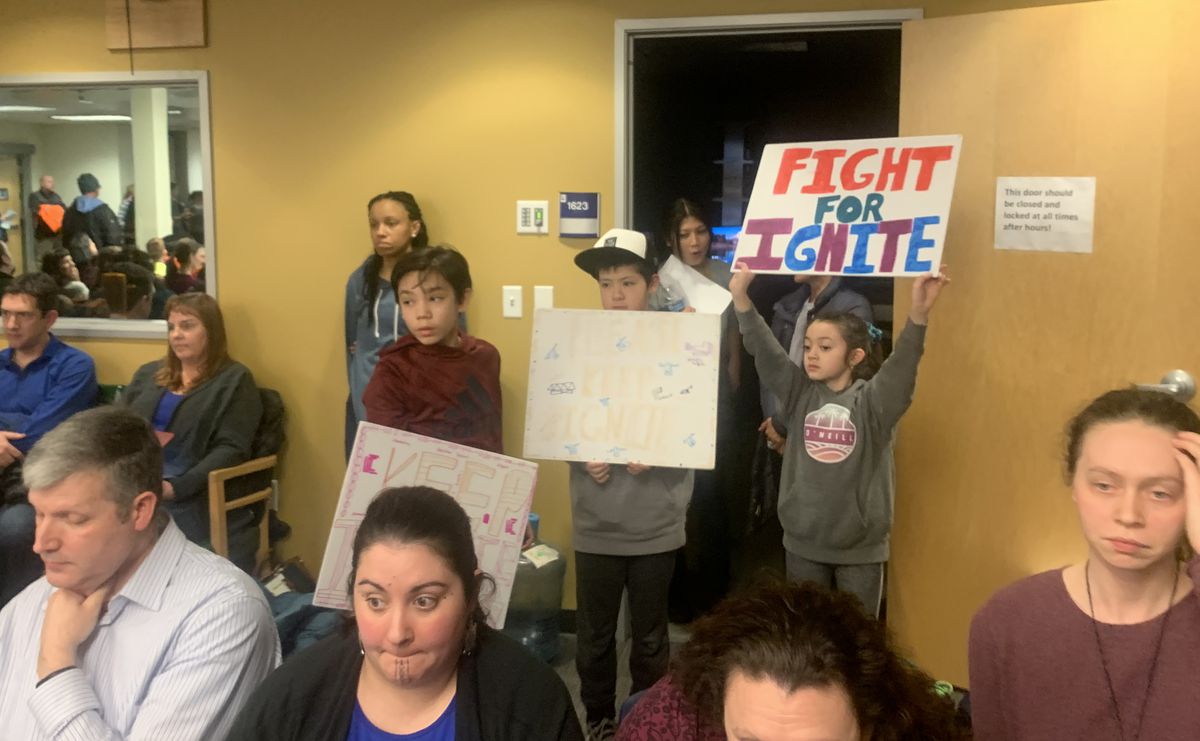 From left, Carter Vigil, Luke Mackay and Chloe Vigil hold signs urging the Anchorage School Board not to reorganize the district's IGNITE program during the board's meeting on Tuesday at the ASD Education Center in Anchorage. (Matt Tunseth / ADN)

From left, Carter Vigil, Luke Mackay and Chloe Vigil hold signs urging the Anchorage School Board not to reorganize the district's IGNITE program during the board's meeting on Tuesday at the ASD Education Center in Anchorage. (Matt Tunseth / ADN)

Anchorage School Board members dipped into the district’s reserves Tuesday to deliver a late-night gift to some of the school district’s gifted students.

After nearly six hours of discussion and public testimony, the board voted 5-2 to pass an $882.2 million budget for 2020-21 that includes $2.3 million in one-time funding for the IGNITE program for gifted students and another $286,000 to pay for security guards at Chugiak, Dimond and Service high schools and Polaris K-12.

District administrators had proposed restructuring IGNITE and eliminating the security positions as part of $20 million in cuts they say are needed to fill an expected shortfall next year.

The budget passed Tuesday removes those cuts but keeps others -- including the elimination of about 29 dedicated elementary school health positions and the addition of a weekly one-hour early release/late start for students.

But after hours of testimony from the dozens of students, parents and teachers who braved a snowstorm to attend the standing-room-only meeting at the Anchorage School District Education Center, it became clear the proposed cuts went too far for the board.

At least for now.

“I think we have an opportunity -- without killing reserves -- to keep IGNITE in place for one year while we make the commitment to ourselves and to our community and to our kids to ... go through whatever redesign or remodeling or whatever it is to make sure we are giving these kids what they need,” said board member Elisa Vakalis.

Vakalis said the restoration of funding is only for one year so the district can come up with alternatives for the program. Her comments came after an avalanche of testimony touting the benefits of IGNITE -- which stands for Including Gifted Needs in Today’s Education -- by those who said the two-to-three-hour-per-week program for students in second through sixth grades is a life-changer.

One student said she stayed up past her bedtime to testify on behalf of the program. Another started to cry when she spoke to the board. Another skipped the musical “Chicago” to attend the meeting. Others stood outside peeking into the meeting room, which has a capacity of 219 people -- some of whom sat on the floor.

Most testified against cutting IGNITE, though some spoke against cutting the security guards or moving health education into regular class time. One man brought a petition with 1,900 signatures against reorganizing IGNITE.

District administrators proposed reorganizing IGNITE by including it in regular What I Need (WIN) time, 40 minutes each day that are allocated for students to work on individualized needs.

Money for the program will come from the district’s unallocated reserve fund balance, adding to $6 million already being pulled from savings next year to keep class sizes stable.

Board member Andy Holleman stressed the IGNITE funds are intended as a one-year “stopgap” and not a long-term fix. He also noted that use of reserves isn’t the wisest way for the district to spend its money.

“It's not really even a savings account, it’s reserve funds a large organization needs to have on hand in order to function safely,” he said. “And they don’t grow back.”

Board President Starr Marsett was more blunt. She said district administrators worked hard to implement the school board’s priorities in the proposed budget. Marsett doesn’t think the board should use amendments to alter that work, and said her opposition to restoring IGNITE has nothing to do with the program’s merits.

“It’s not that I’m opposed to keeping it another year, it’s just we will be in the same position we are today because parents and students will think because we saved it this year we’ll be able to save it next year,” she said.

Funding for the security guard positions also drew pleas from those who testified, including a large group from Polaris K-12 school who showed up in bright orange vests in support of keeping Mike Burns, the school’s lone security officer.

“I just want to know which ones of those functions don’t you want or don’t want to have happen,” Bishop said.

Marsett also bristled at the implication the district office is bloated.

“Those individuals are just as stressed as our teachers, and everyone in our district is doing more with less,” Marsett said.

Only Donley voted for the amendment, one of several he offered that were voted down by the board, including an amendment to cut $32,000 by leaving the Coalition for Education Equity and another $27,000 by pulling out of the Alaska Association of School Boards.

One budget cut left untouched by the board is a plan to absorb health education into regular classroom instruction and physical education. The move will save about $3.1 million and prevents the district from having to raise the average class size by a half-teacher, Bishop said.

Holleman offered an amendment that would have saved elementary health instructors and eliminated the late start/early release by increasing class size, but it failed 6-1.

Hilde said both the public and the board have made keeping class sizes from increasing a top priority, and said the tradeoff of cutting classroom teachers in order to save dedicated health educators was too steep a price to pay.

“It doesn’t mean health teachers aren’t incredibly important, but that’s a parameter we made and I’m going to honor it,” she said.

The budget will now go before the Anchorage Assembly for final approval. Though the budget has cleared the largest hurdle, plenty of uncertainty remains as it’s still unknown how much the Legislature will fund education. However, the district’s budget is based on the assumption state funding will remain flat this year.