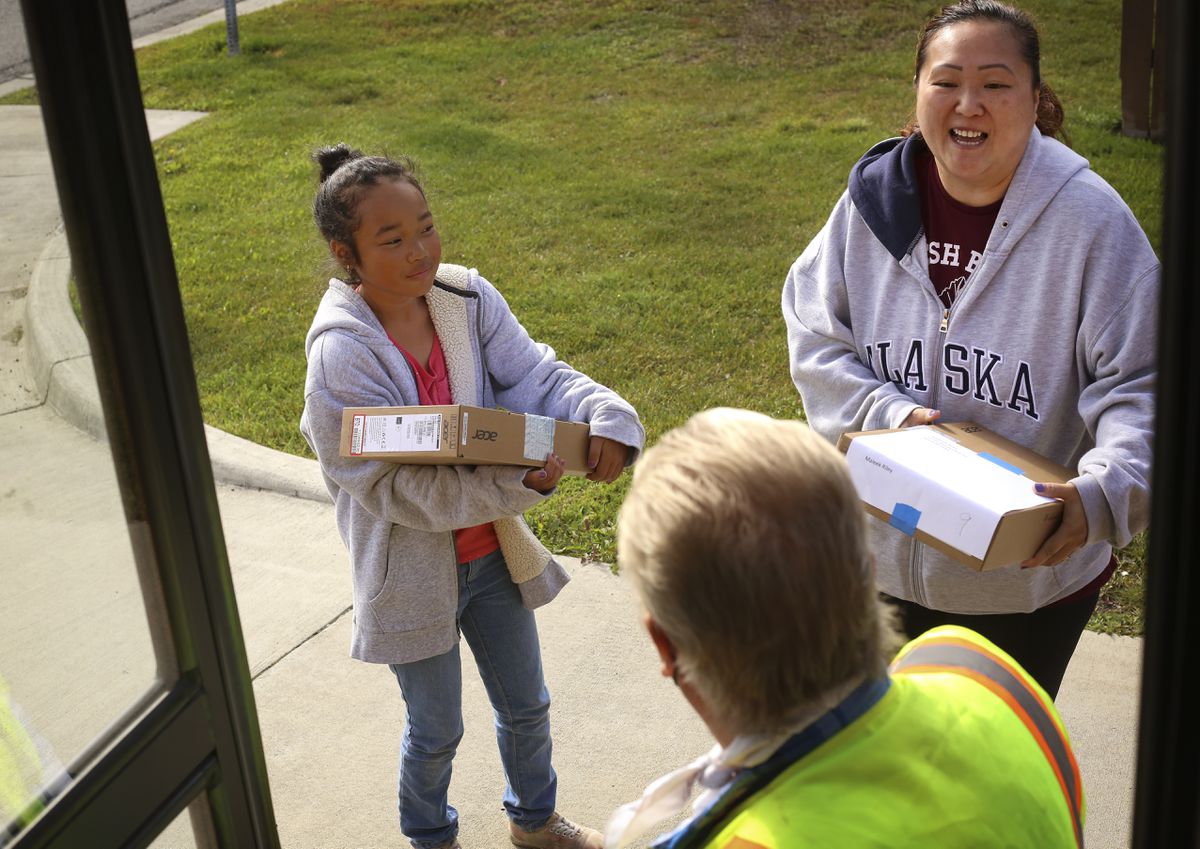 School bus 105 rumbled through an East Anchorage neighborhood Wednesday morning and lurched to a stop at a street corner where third grader Sidney Riley and her mother, Kristine, stood waiting.

Sidney didn’t hop on the bus to head to school. Instead, Lloyd Palmatier, a gray-haired man wearing a black face mask and a white kerchief tied around his neck, shuffled down the steps to greet the pair.

Palmatier carried a basket with a brown cardboard box, which contained a Chromebook laptop he delivered to Sidney.

That laptop will be Sidney’s source of connection to her elementary school teacher and her new classes when schools go online Thursday morning for the first day of the 2020-21 school year. It is an unprecedented beginning to a school year in the Anchorage School District; all students, like Sidney Riley, will need a computer or laptop to attend their first day of virtual classes.

The district moved online in March when the state shut down all school buildings as the coronavirus pandemic began to surge. Schools are now gearing up for a virtual start and the district could remain online for the entire first quarter, the superintendent has said.

[As Anchorage schools prepare for a virtual first quarter, a host of challenges awaits]

Palmatier, who has worked as a bus attendant for seven years, has spent the last few weeks delivering laptops to families around Anchorage. For now, families must request a laptop for their students if they don’t already have one, but the school district plans to eventually issue a device to every student in grades 3-12.

Each day, pairs of school bus drivers and staff gather up a load of laptops and set out on a route to deliver them, sometimes waiting at a bus stop, other times seeking out addresses and knocking on doors. Sometimes at the end of a long route, they stop again at the addresses where no one was home.

“We try to make every attempt we can to get it to them,” Palmatier said.

The district has distributed 10,500 Chromebooks since spring and is working to distribute at least 3,600 more over the next week.

At another delivery stop Wednesday, a group of children gathered at an upstairs window of a home and hung their arms out, smiling and waving at the familiar sight of the yellow bus.

The delivery task has given Palmatier something to do. He said he didn’t know what to do with himself when school buildings closed in spring. Fortunately, he was soon able to help deliver laptops and lunches to families, he said.

Chuck Niemann, now in his 21st year as a bus driver, was paired with Palmatier and said that on Tuesday they delivered about 50 laptops. He’s had the same route through East Anchorage for the last 11 years and said he’s watched entire families of siblings grow up riding his bus.

Niemann said he loves watching the excitement of kindergartners as they step onto a school bus for the first time.

“Their eyes get huge, as big as saucers,” he said. “Most of them have never seen the inside of a vehicle so big.”

But this year, Niemann and Palmatier don’t know when that “first” day will be.

“I’m going to miss that,” Palmatier said. “Everybody remembers their first day of school.”

During a typical year, he works on a bus transporting special needs kids, preschoolers and kindergartners, and considers the job his “retirement job.”

He isn’t sure exactly what he’ll do when they run out of laptops to deliver. The district’s bus drivers will be on call for other tasks, like delivering school lunches, he said.

But for now, the laptop delivery route suits him, he said.

“Yesterday, a little boy comes running out barefoot, no shirt, jumping up and down — that little boy was so happy to get his computer,” he said.