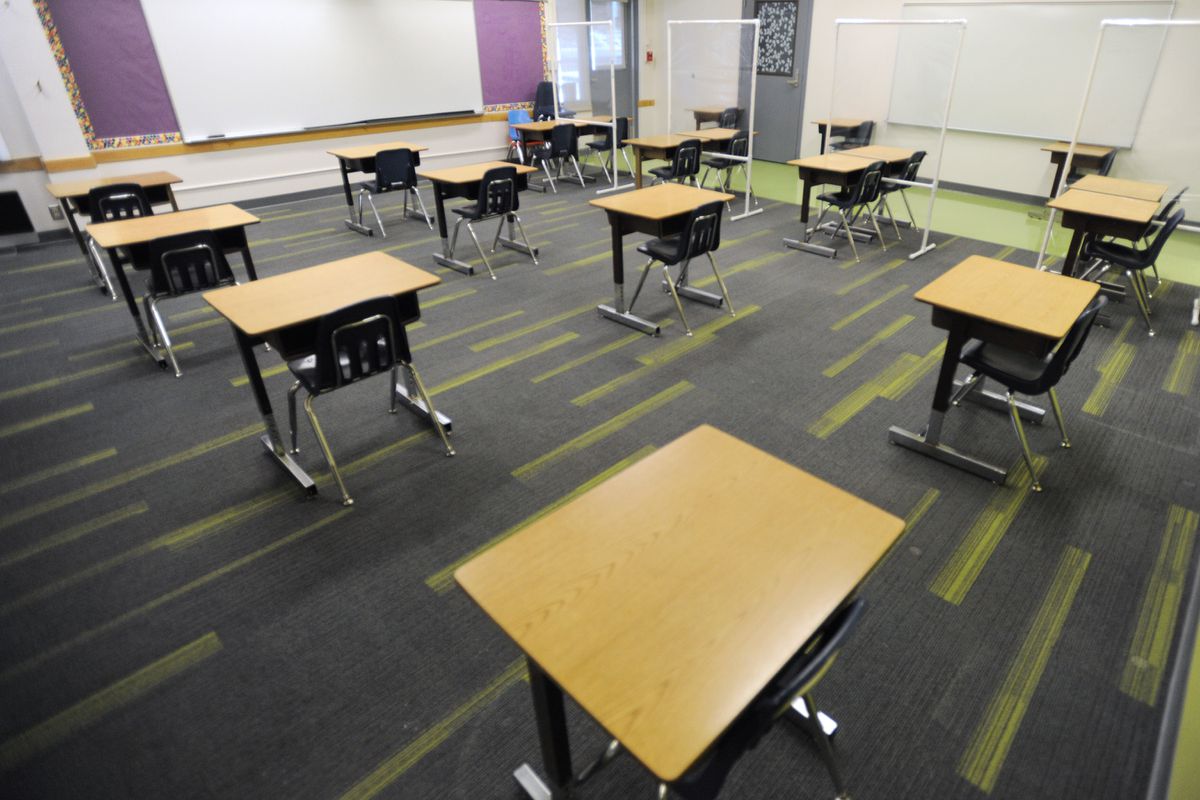 The pandemic is carving deeper Anchorage’s already existing disparities in a school district where more than a third of students are considered economically disadvantaged.

First-quarter grade tallies in Anchorage schools, released Monday evening during an Anchorage School Board meeting, revealed that some groups of students are struggling far more than others.

District data show that Alaska Native and American Indian students, Native Hawaiian and Pacific Islander students, and students who are economically disadvantaged are struggling the most across all grade levels.

“What’s happening in the pandemic is just highlighting what’s already in our data,” Superintendent Deena Bishop said while presenting the grades to the school board.

[Chances are ‘slim’ that Anchorage students can return to classrooms before January, superintendent says]

Also, middle school students have received more than 2,300 “incomplete” grades in lieu of failing, more than 14% of all grades given. Those students will have to make up classes in summer school to earn a passing grade.

Anchorage schools have been online-only since March due to the coronavirus pandemic, and district officials are watching the data closely to assess virtual programs and track the overall effect of school closures on academic success.

“Students in our city are experiencing school and success differently, as they had before,” Bishop said.

“We continue to see a significant disparity,” she said.

There were clear disparities in different student groups receiving incompletes and failing grades in the first quarter:

• For middle school Alaska Native or American Indian students, 27% of grades given were incompletes.

• For Black and Hispanic middle school students, about 15% of grades were incompletes

• For multiethnic students about 17% of grades were incompletes.

• For Asian students about 10% of grades were incompletes.

• For white students, 7% of grades were incompletes.

• One in five economically disadvantaged high school students received an F, according to Bishop.

The district compared grade data to the previous year’s data and found that for both elementary and middle school students, grades are trending downward, with fewer A’s and B’s and more C’s, D’s and F’s.

For example, the district found that for seventh grade, there was an overall decrease in A’s by about 12% from the previous year.

The data for middle school shows an overall decrease for the number of F’s, but almost all students who would have failed instead received an incomplete. Incompletes increased by an overall 14%.

Bishop said those students will be able to earn passing grades later in the school year or over the summer.

In elementary school, some classes are graded on an A-to-F scale, while others use an O-S-N scale, or “outstanding,” “satisfactory” and “not satisfactory.”

In sixth grade, for all top marks — A’s and O’s — there was a decrease from the previous year, with a more than 6% decrease in A’s and a nearly 8% decrease in O’s.

Younger elementary students fared better, with some decreases in the lowest marks and increases in top marks. For first and second grade, O’s increased while N’s decreased slightly.

Bishop said it was not yet possible for officials to compare high school grades because last year, high schools operated on a semester system and they did not give out official grades at the same time.

Still, more than a fourth of the grades given to high school students who identify as Alaska Native or American Indian were failing grades. For Hawaiian and Pacific Islander students, more than 23% of grades were F’s.

During a period for public testimony at the school board meeting Monday evening, a few Anchorage students spoke about their experiences during virtual school. Sarah Price, a student at Eagle River High School, talked about the drastic effects of school closures on her peers.

“I am standing here because I am watching kids I know fail classes, lose hope in their dreams, question whether they can even get into college, or conclude that depression is just how it is now,” Price said.

Still, others prefer school at home for now. Emily Erickson of Dimond High School said she wants to go back to in-person classes but it is too risky while community transmission of the coronavirus is at an all-time high.

“Online learning is working and our teachers are successful in educating our students,” Erickson said. “As high schoolers, we have the maturity level and responsibility to take charge of our own learning.”

Correction: A previous version of this story incorrectly said that for first grade ASD students, all top marks, A’s and O’s, had decreased from the previous year. A’s did decrease by 8% but O’s increased by about 8%.