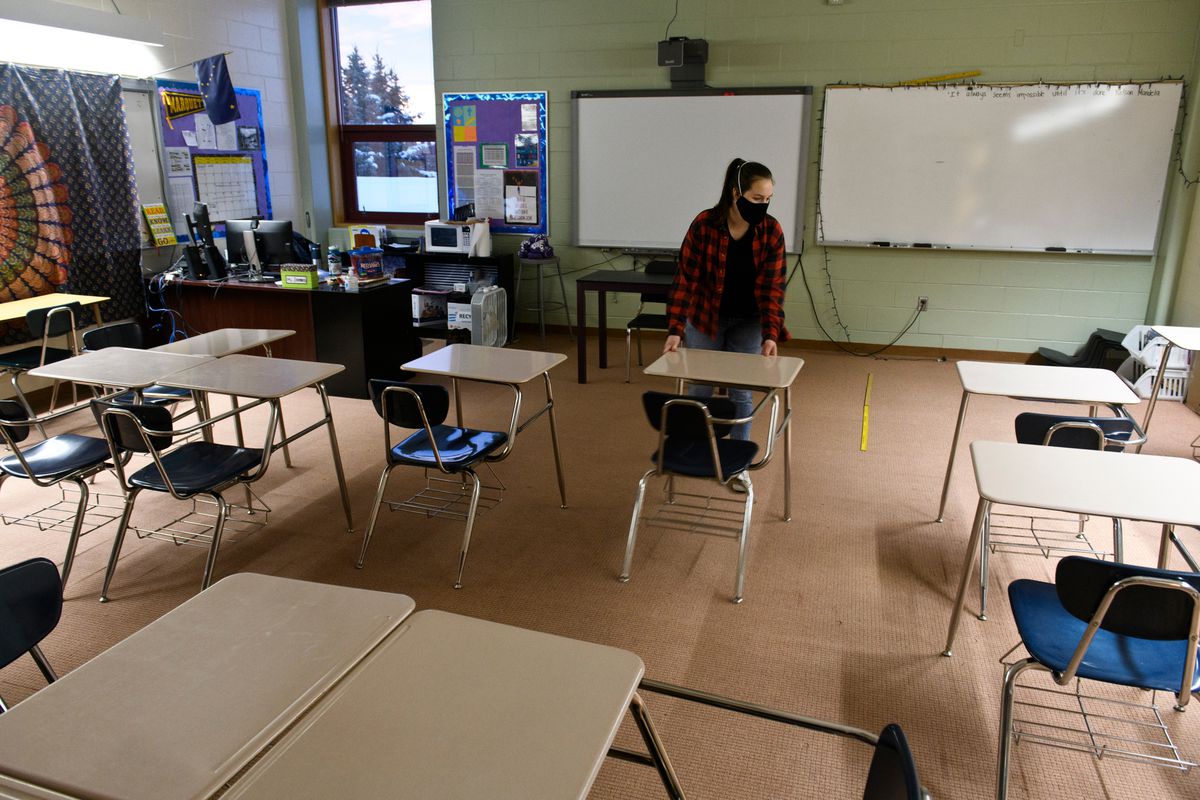 SOLDOTNA — Days before students returned for in-person classes, Skyview Middle School principal Sarge Truesdell could sense anticipation among the teachers as they prepared in empty classrooms. Truesdell felt it himself.

Though much of the Kenai Peninsula Borough School District remains at a high risk level for COVID-19, students whose families chose an onsite learning option returned to schools starting Monday. Students through sixth grade began attending classes five days a week. Grades seven to 12 will attend two to three times per week until the risk status drops to medium. Then they too will attend onsite five days per week.

Truesdell said the fear that students could spread to COVID-19 to one another and to their families remains. He and his staff have developed a mitigation plan that includes color-coded cohorts of students that don’t intermingle during lunch or passing times, mandatory mask wearing and one-way traffic patterns.

In addition to virus considerations, Truesdell has also had increasing concern about a widening educational gap between “the haves and the have-nots,” he said. Some of Skyview’s students take instruction via paper packets because they have poor internet access at home, he said, or no access at all.

Prior to Monday, only pre-kindergarten, kindergarten and special education and intensive need students had the option to attend school onsite in the district. All students will continue to have remote learning options, according to KPBSD communications director Pegge Erkeneff. Eighteen of Skyview’s 300 students currently choose remote-only learning, though other students opted for a home-school program before the start of the year, Truesdell said.

KPBSD schools distributed 2,000 Chromebook computers and 200 MiFi hotspots. But that alone didn’t address everyone’s access problems in rural and remote reaches of the Kenai Peninsula. KPBSD has 7,756 students in 42 schools — from large high schools in population centers to one-room schoolhouses in places only accessible by boat or plane — spread across a 25,000-square-mile region.

“We have some areas on the Peninsula that are on the road system but don’t have very good internet,” Erkeneff said.

Technology notwithstanding, some individuals and households struggled to implement remote learning effectively. That included some advanced-level learners, Truesdell said. Single-parent homes, homes where both parents work and households juggling multiple Zoom schedules tended to have a difficult time.

This is the school’s second reopening this year. After beginning the school year remotely, classes reconvened onsite for about seven weeks in fall, Truesdell said. But COVID-19 cases then rose dramatically on the Kenai Peninsula and schools closed again. Though the risk remains high in all regions of Southcentral Alaska, Truesdell said most of Skyview’s staff favors reopening classrooms.

“I think it got to a point where the damage to the students started to override the fear of what could happen,” Truesdell said. “The community certainly has spoken out in the fact that they wanted kids in schools.”

[Amid ‘incredibly limited’ COVID-19 vaccine supply in Alaska, calls grow to bump up teachers and others]

On Friday, some teachers came to the school to prepare their classrooms and lessons and to review the school’s virus mitigation plans.

“I want them back,” said eighth grade science teacher David Patat. Science instruction benefits from the hands-on lab work that’s hard to replicate from a distance, he said, though he has tried.

“I have probably anywhere from 15 or 20% that can’t log in …” Patat said. “We gave out a lot of NGs, no grades, and kids that were doing probably a letter grade lower than they normally would.”

In the room next door, physical education teacher Shannon Dwyer prepared signs to show student groups where to go and which equipment to use. She said in a perfect world, every student would have a good internet connection and could continue to learn from home. In the real world, though, she recognizes the problems that come from serving students living from east of Sterling, south to Kasilof and along other rural roadways in all directions.

“We have one system for one way of doing things and we’re trying to patch it together to make it through this other thing,” Dwyer said. “And I think we’ve done a great job, but it still does not catch nearly enough because not one kid should get left behind.”

Down the hall, student teacher Nolan Rose said he felt comfortable with the school’s mitigation plan despite the risk associated with more people in the building.

“I think there’s a lot of health and mental health benefits to getting the kids back in the building, that if you balance those with the risks, I think it’s a good time to get them back in,” he said.

On the first floor, history teacher Jonus Angleton talked with language arts teacher Amy Dawn. Both said distance learning has been an exercise in problem solving and understanding.

“We find that we have to have a lot of grace in this situation with students because it’s out of all of our control. So we do the best we can,” Angleton said.

Dawn said she knew of one situation where a parent had been taking a student to use an public internet hotspot in the city. Because that hotspot had limited availability, the student attended only some classes.

Truesdell has heard similar stories, including those of families who parked outside elementary schools to use wireless internet.

“We have families and parents who were doing anything possible to try and engage, including sitting in a car that’s running while they’re on the Wi-Fi of the school,” Truesdell said.

Both Dawn and Angleton said they were comfortable with returning students to the classroom.

Erkeneff said the district’s leadership has worked with employee unions during the creation of COVID-19 mitigation plans. She said none of the district’s 1,300 employees have been fired this year for not wanting to return to school because of concerns about COVID-19 exposure. Some changed assignments at the start of the school year, and in a few instances now, principals are working with staff members to find temporary solutions to reduce potential exposure, she said.

Truesdell said none of his 49-person staff at Skyview has declined to return this semester, though some have expressed concern. At the start of the school year, one teacher took a voluntary transfer to work with the KPBSD home-school program due to COVID-19 concerns, Truesdell said.

[Growing evidence suggests schools contribute little to virus spread, if they have the right rules in place]

Beginning last March, each Skyview teacher has made weekly or biweekly calls to check on the social and emotional well-being of students, Truesdell said. It was an extension of the in-person conversations they had been doing previously. During the pandemic, those calls have been eye-opening regarding the financial challenges, family struggles and traumatic experiences some students face. Truesdell, in his 10th year as principal, said he had a similar experience when he moved from classroom teaching to an administrative role.

“There was some shame for me because I hounded kids for homework or, ‘Why weren’t you here yesterday?’ and ‘I didn’t really understand the story,’ ” Truesdell said.

“While these teachers are calling home and they’re doing that social-emotional check-in, they’re getting blasted with a lot of stuff that weighs them down. They’re recognizing how hard it is for some of these families to do the online learning.”

Truesdell suspects some staff members are setting aside their virus concerns for their desire to help keep an eye on young people in difficult situations.

“I think teachers would throw themselves in front of a car for their kids,” Truesdell said.

First-year science teacher Alexandria Bergholtz said a lot of her young career has been focused on online learning. As comfortable as she has become with that, it doesn’t replace the relationship building that happens in a classroom.

“I keep looking for students in the grocery store, just so I could maybe even see them. And I haven’t. But knowing that they’re coming back on Monday, I’m just really excited to see their faces again,” Bergholtz said.

“I do care about their schooling and their education, but I also just want them to grow as a person,” she said. “And I like seeing that in the school.”