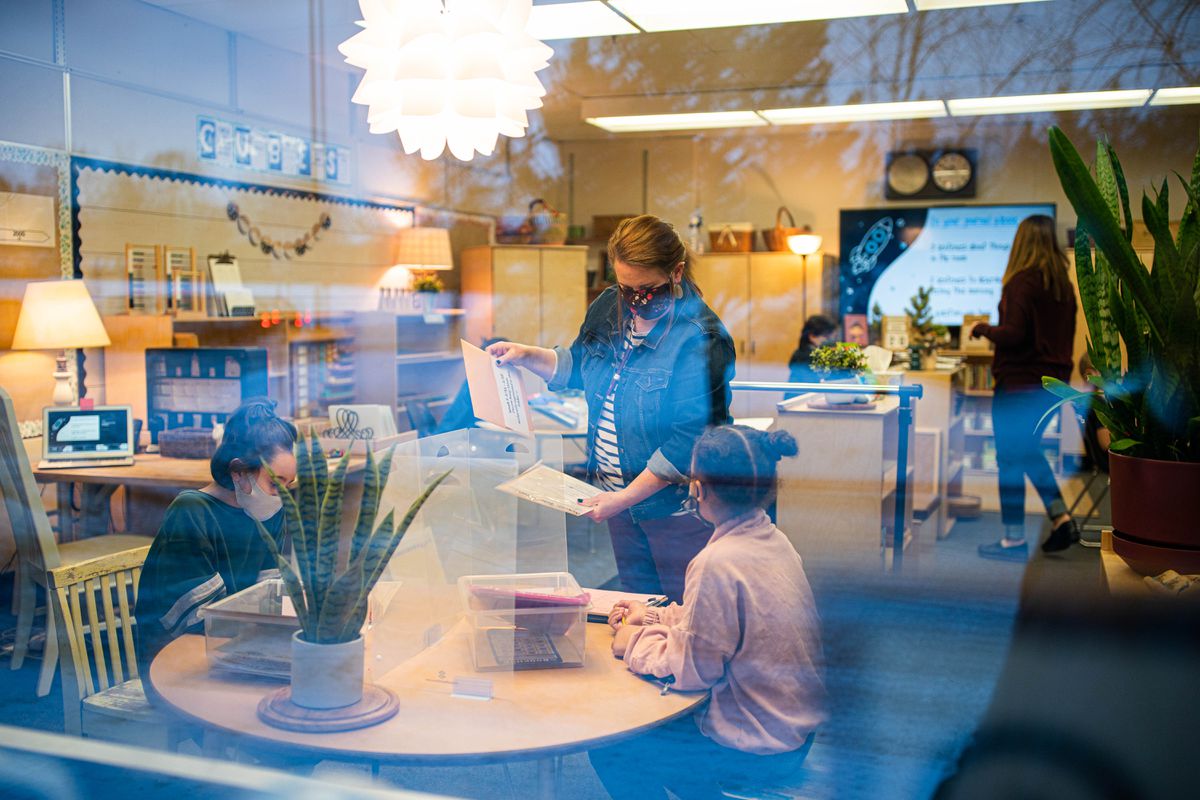 Top state health officials this week said they’re discussing the possibility of moving up all K-12 teachers in the ranks of Alaskans who will be eligible next for the state’s scarce supply of COVID-19 vaccine.

People in the education community have been pressing for broad vaccinations that coincide with school reopening schedules. Right now, the state schedule puts only some teachers — those 50 and over, or with health conditions — in the next eligible groups of front-line essential workers.

“This is a conversation that’s being had,” state vaccine task force co-lead Tessa Walker Linderman said during a media briefing Thursday after being asked if the state plans to make a broader category of all K-12 teachers eligible.

“We’ve said that this is a working document,” Walker Linderman said about the state’s eligibility platform. “We don’t have anything official to report just yet.”

Talks about moving up teachers are occurring internally at the Alaska Department of Health and Social Services, she said. The Alaska Vaccine Allocation Advisory Committee also discussed the topic at it last meeting earlier this month.

The state’s allocation plan is “subject to change” based on factors that include epidemiology, the science of COVID-19 and how well the vaccine is working in various population groups, state epidemiologist Dr. Joe McLaughlin said at the same briefing.

There’s no plan to add teachers to the groups of Alaskans who are eligible for vaccine now: health care workers, long-term care centers, and most significantly people 65 and older, a large demographic expected to take most of February if not all of the month, officials say.

Many districts are already returning to in-person learning including Anchorage School District, where most elementary students in pre-kindergarten through the second grade, and special education students in self-contained classrooms through the sixth grade, started last week.

NEA-Alaska is pleased state officials are listening to feedback from educators asking for broad vaccinations, according to Tom Klaameyer, president of the statewide union that represents 12,000 public school employees. The union argues that teachers and others working in schools are at high risk because of close proximity to many people -- classrooms of 20 students, say -- for hours at a time.

Ideally to protect staff and keep schools from becoming “super spread sites,” everyone from bus drivers to custodians, as well as teachers, would get vaccinated ahead of in-person school openings, Klaameyer said. But that will require an accelerated pace of vaccine distribution on both the state and federal level.

“Everybody wants to get vaccinated. Everybody needs to be,” he said Friday. “We’ve got more people than we’ve got vaccine right now.”

Some teachers without vaccinations, however, are wary of returning to the classroom.

The Anchorage Education Association, the local teacher’s union, has filed a preliminary grievance with the school district, a notification that some members may refuse to carry out work assignments due to unsafe working conditions that also outlined the steps members can take if they feel forced into an unsafe situation by their school administrator.

The Matanuska-Susitna Borough School District was the state’s largest to start the year last August with in-person learning. Since, the district has reported hundreds of COVID-19 cases that sometimes led to brief closures.

At one point in November, however, surging local infections in Mat-Su led to hundreds of daily teacher absences and overwhelmed contact tracers trying to keep up with cases in staff and students, prompting a temporary shift to remote learning.

“While we’ve been able to learn from that, it was tough watching and waiting for other shoe to fall,” he said. “I don’t think for that month or so it was as safe as some educators would have liked.”