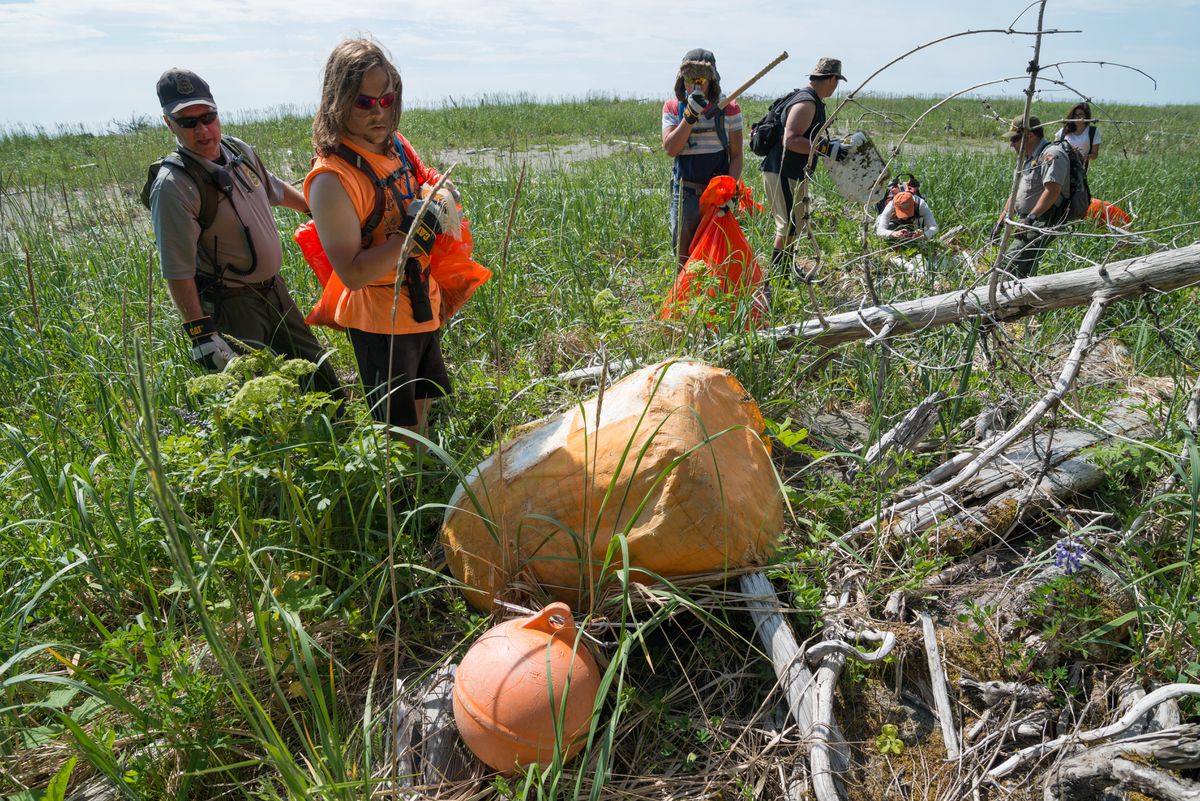 Trash adrift in the world's oceans can travel great distances and wash up on some unexpected sites, including protected and supposedly pristine national parks in Alaska.

Now an analysis of debris collected from beaches of five Alaska national parks is revealing clues about the sources of the garbage, some of them very far away and some others very close to home.

The information comes from a 2015 project that sent researchers and volunteers to beaches in the national parks of Wrangell-St. Elias, Kenai Fjords, Katmai, Bering Land Bridge and Cape Krusenstern National Monument

Results are detailed in a study published online in the journal Marine Pollution Bulletin.

The cleanup workers, who included scientists, park employees and many local volunteers, picked up and sifted through a variety of debris washed ashore on beaches in the park units. What emerged were some patterns that indicated different sources for the trash and different assemblages, depending on beach location and beach characteristics.

In all, 28 beaches spanning a total of about 50 miles of beach were surveyed and more than 11 tons of trash collected.

That total haul might seem surprising for beaches expected to be clean compared to heavily used beaches in places like California, said lead author Lori Polasek, a marine biologist with the Alaska SeaLife Center and University of Alaska Fairbanks.

But considering Alaska's sparse population, she said, "we still get quite a bit of debris," she said.

The cleanup cleared the beaches only temporarily, she said, as currents and winds replenish the washed-ashore trash piles.

"If we went there again next year or two years from now we would likely find similar volume of debris on the beaches," she said. "We have to get back to the root of the problem, which is preventing the debris from happening."

Some of the sandy beaches looked deceptively clean because the trash there was generally pushed by winds and waves into the plants edging the shore, said Tahzay Jones, regional coastal ecologist for the National Park Service in Alaska and one of the project organizers.

Trash also collected in driftwood and other features, said Jones, who went with the volunteers to most of the cleanup sites. "Any of the rocky beaches, it was everywhere," he said.

With currents and winds replenishing the beach trash, the cleanup cleared the shores only temporarily, Polasek said.

Plastic dominated the loads of trash collected, making up 60 percent of trash as measured by weight. Every beach had some sort of hard plastic trash, the survey found. In that category were bottles, jugs, cigarette butts, wrappers, bags, straws and similar items.

By volume, lightweight foam – Styrofoam pieces, floats, packing material and personal items like flip flops and life jackets – was the most abundant form of trash. It was ubiquitous, found on all but one of the beaches, the study said. Some pieces were found with bite marks left by bears. By weight, however, foam accounted for only 13.3 percent of the collected debris.

Plastic and foam pose an especially insidious environmental problem, she said. They break down into tiny pieces, called microplastics, that are consumed by larvae and other tiny creatures that are at the base of the food chain and the beginning of organisms' development.

"If you hit them with microplastics, you're really altering the whole food chain," Polasek said.

Plastics are known to absorb chemical contaminants, so organisms that eat microplastics would pass those chemicals up the food chain. Microplastics have been found even in high Arctic waters, but baseline information for Alaska has yet to be assembled, Polasek said.

Rope and netting accounted for 14.6 percent of the park beaches' trash by weight, and it was found on 23 of the 28 beaches, according to the study.

Nonferrous metal items – including cans, scrap metal and boat pieces — made up 1.7 percent of the trash by weight. The project did not collect iron products, which were left to rust in place, and it did not collect wood, also left to decay.

The project did not seek to identify debris set loose by Japan's 2010 earthquake and tsunami disaster. But it is likely that some of the collected trash was tsunami-related, Polasek said.

An important lesson of the project was the mix of trash, which varied by geography.

The Gulf of Alaska beaches had significantly higher debris loads than those in Western Alaska, and much of what was there seemed to have drifted in from wide areas of the Pacific.

The Western Alaska beach debris mix tilted more to local and regional sources, some of it associated with fishing and shipping in the Bering Sea or with rivers that flow into it, Polasek said.

The collected fishing floats illustrated that difference. In the Gulf, there were many small foam "banana floats," which are used internationally. Washed up on the western beaches were cylindrical floats of the type used domestically, in the Bering fisheries.

Still, all regions, even the western sites, had trash with faraway origins, as indicated by their markings, Jones said. "We had Thailand, China, Japan, Korea, Russia — all those were found on the beaches there," he said. "Those are the ones that I personally saw."

There were also items with origins traced to Singapore, Argentina and South Africa, according to the analysis.

The highest average debris density was found in Wrangell-St. Elias, and the two surveyed beaches in that park had the biggest loads of foam. Those beaches also had some odd forms of debris items – a "heavy conglomerate of inseparable rope, wire and rubber," plus an abandoned all-terrain vehicle.

The single beach with the highest debris density was in Kenai Fjords.

The lowest trash density was at Cape Krusenstern, but those beaches had the highest percentage of rubber trash, like tire treads, believed to come from local sources.

Bering Land Bridge beaches, in contrast, had very little of the type of trash, like rubber and cans, that could be associated with local users. The seasonal fish camps set up on the coastline are on bluffs above the beach, the study noted.

On the Katmai coast, some of the collected items are believed to be from the wreck of an 82-foot fishing vessel, the Northern Pride, which  burned and was abandoned off Kodiak in the spring before the cleanup took place.

The ship's hull washed ashore prior to the cleanup crews' work; the rest of the ship broke apart and, apparently, scattered pieces into the environment.

Odd items documented included a section of couch found at Cape Krusenstern, a refrigerator found at Wrangell-St. Elias and many shoes found throughout the study area.

Participating in the beach cleanup were several tribal and community groups, including Boy Scout troop members and other young volunteers. Jones estimated 40 to 50 people worked on the cleanup.

The five-park cleanup was a one-time project, Polasek said. No repeat effort is yet planned, but individual parks do their own occasional summer cleanups, she said.