Commercial solar is about to become a reality in Alaska 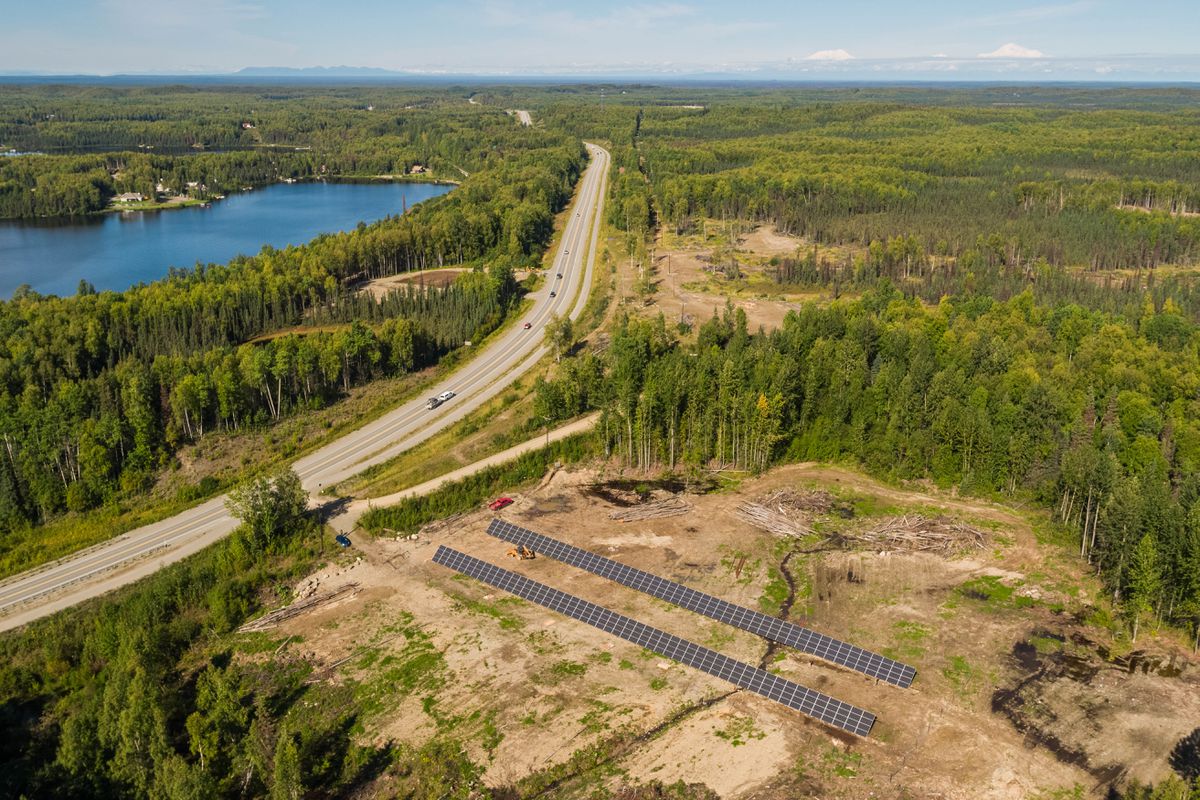 Solar panels soak up the sun at a solar farm operated by Renewable IPP in Willow Wednesday. When the 100-kilowatt project is turned on in September it will briefly be the state’s biggest. Golden Valley Electric Association is building a 563-kilowatt project in Fairbanks that is expected to be completed later this fall. (Loren Holmes / ADN)

Solar panels soak up the sun at a solar farm operated by Renewable IPP in Willow Wednesday. When the 100-kilowatt project is turned on in September it will briefly be the state’s biggest. Golden Valley Electric Association is building a 563-kilowatt project in Fairbanks that is expected to be completed later this fall. (Loren Holmes / ADN)

WILLOW — A massive 408-panel solar power array is weeks away from completion on a plot of land along the Parks Highway in Willow. When it's switched on next month it will, for a short time, be the largest solar power project in Alaska.

The project is the brainchild of four engineers with backgrounds in the oil and gas industry. The four are also self-funding the project, which they hope will be a proof-of-concept for an expansion in 2019.

"This is our pilot," said Sam Dennis, one of the four investors in Renewable IPP, the company building the project. Dennis was taking a break from working on wiring at the farm on Wednesday. "We wanted to figure out if we can do this. We wanted to do something big enough so we learn from the experience, but not so big that it kills us."

Dennis and his partners began formal discussions with Matanuska Electric Association in February, closed on the 17-acre property around June 1, and spent the summer clearing trees and building the steel support structure for the solar panels. Once that was done, it took five people two days to hang the 408 panels, each of which is nearly 6 1/2 feet long and weighs about 50 pounds.

"It's not an ideal site," said Dennis. "If we want to expand here, we need to cut down about a million cottonwood trees."

The group settled on the Willow property after looking around for suitable land in Anchorage. "We chose this spot because we had access to 3-phase power," he said, pointing to the nearby power line, which has three distinct lines mounted to the pole. "To generate utility-scale power, you have to generate 3-phase power."

The power coming into most people's homes is single-phase, which uses two wires.

Dennis was a project manager at BP before he retired, so he has experience working on large and complicated developments.

Dennis's time at BP did more than give him the skills needed to manage a complex project like the solar farm. "The money invested here came from my time at BP," he said.

"Petroleum powered the 20th century, and we're in the 21st century," he continued. "It's appropriate that we are starting to do this transition and that the petroleum industry is feeding into this transition."

Not only has the approximately $200-300k investment for the project come from investors who have all worked in the petroleum industry, but the steel pipes used to support the solar panels are repurposed oil and gas drill pipes. Some of the pipes bear the name Hilcorp, which is the biggest oil and gas producer in Cook Inlet.

Dennis and his partners hope to flip the switch and start producing power in early or mid-September. They are waiting on a shipment of wires to connect all the panels to their inverters, which take power from the solar panels and generate 3-phase power that is then put into Matanuska Electric Association's grid.

"MEA has been really supportive," said Dennis. "They're ready. Their engineer keeps going, How you doing? You ready?"

According to Dennis, MEA quickly gave the go-ahead for the 100-kilowatt project, which was the most the utility felt they could handle without needing further study. Renewable IPP will sell the energy to MEA at a wholesale price, what MEA calls their avoided-cost, which is around $0.09/kWh.

MEA currently purchases power from two other small independent power producers, run-of-river hydro projects in Palmer and Eagle River, according to MEA spokesperson Julie Estey. She added that approximately 10% of MEA's power comes from hydropower projects, and a small fraction of a percent from solar and wind.

"This is the first project (in Alaska) that I am aware of that will be operated (under this wholesale model)," said Chris Pike, a research scientist at the Alaska Center for Energy and Power. "Since solar is still relatively new in Alaska, there isn't a precedent for different types of business models like there are in the lower 48. Oftentimes it just takes someone willing to be the first to dip their toe in the water."

"We have already had many positive member comments on the project from folks seeing it as they drive north on the Parks Highway," said Estey. 70% of MEA members that responded to a recent survey said they supported more renewable energy production, she added. The cooperative is currently researching the feasibility of a community solar project.

Renewable IPP's goal is to make money by selling power to MEA, but that's not the real purpose, said Dennis. "The real reason I'm doing this is that I'm a firm believer in climate change. If we can show that this is economic, it'll encourage other people to do it."

"There's room for a hundred farms like this and it only would make a tiny dent in the power we consume," he said.

Correction: An earlier version of this story incorrectly located Willow on the Glenn Highway. Willow is on the Parks Highway.