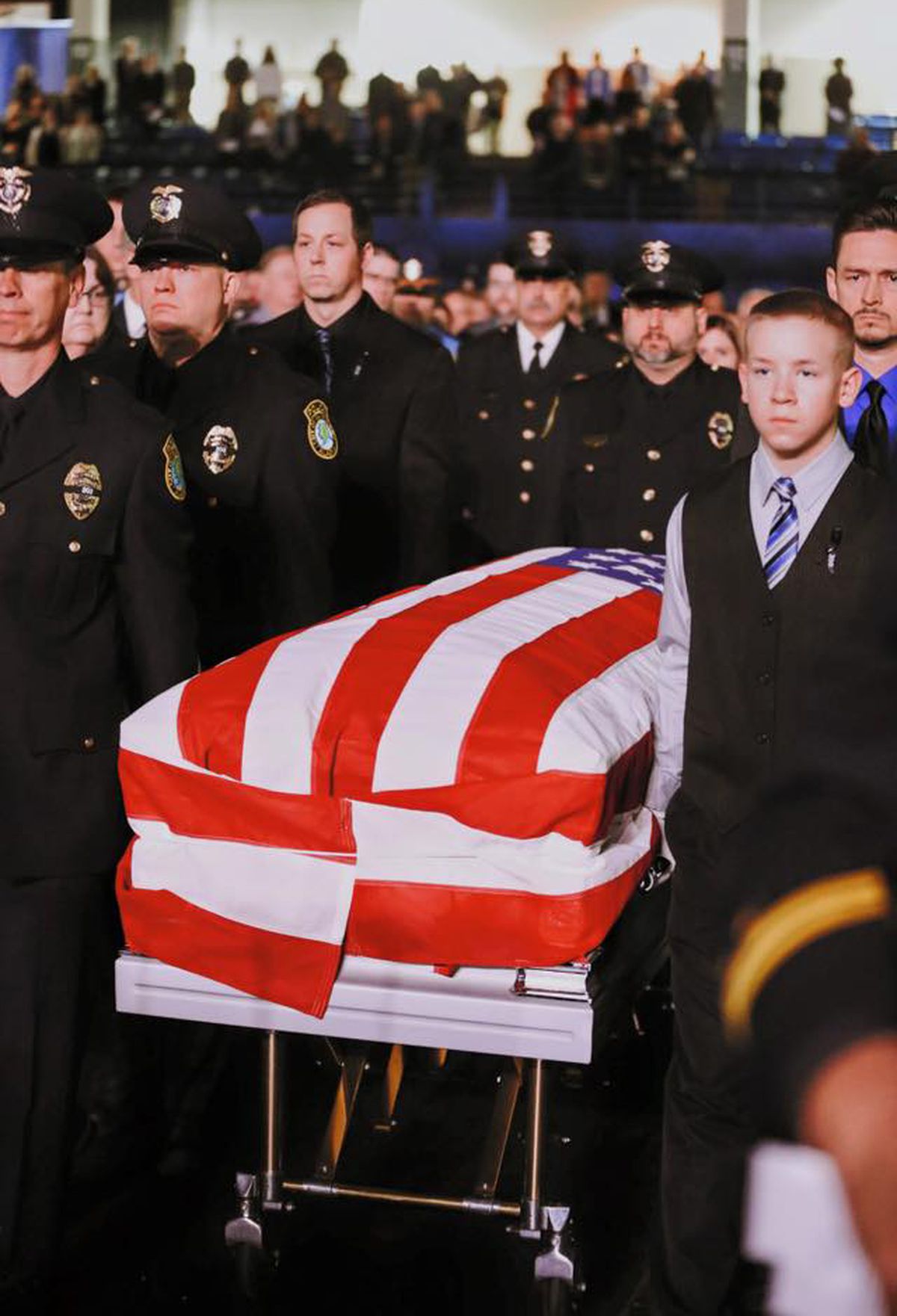 A memorial service was held for Fairbanks Police Sgt. Allen Brandt at the Carlson Center on Sunday, Nov. 6, 2016. (Photo by Stephanie Barney)

A memorial service was held for Fairbanks Police Sgt. Allen Brandt at the Carlson Center on Sunday, Nov. 6, 2016. (Photo by Stephanie Barney)

FAIRBANKS — Among the posthumous plaudits and medals offered to the memory of Fairbanks Police Sgt. Allen Brandt Sunday, the most meaningful came from his 8-year-old son, Fritz.

At a memorial service in the Carlson Center attended by about 2,000 people, Fritz brought a small trophy to the stage, assisted by Acting Fairbanks Police Chief Brad Johnson. It was Fritz's idea that Brandt's four children present an award for their dad.

The gold-colored trophy had an eagle with wings extended and a base with the words: "Sgt. Allen Brandt: Best Dad Ever! We love you! Fritz, Kate, Claire & Belle."

Brandt's widow Natasha, her four children, other family members and friends joined police officers from across Alaska, as well as many from other states and Canada in memory of the Fairbanks police officer who was ambushed and shot six times by a gunman three weeks ago.

Brandt died Oct. 28 following complications from a surgery to remove shrapnel in his left eye. Before the surgery, he knew that the injury would probably mean the loss of vision in that eye and the end of his career as an officer. He thought that if he could no longer be a policeman, he would have more time to tell people about Jesus Christ. He was a member of the True North Baptist Church.

Immediately after the shooting, Brandt told Natasha and his best friend, North Pole police officer Phil McBroom, that he didn't know whether he would survive, but "I pray that through this people will be saved and come to know the Lord. Then it would be worth it."

And Brandt spoke as well, in the form of videotaped remarks he made to the Fairbanks City Council a week after the shooting. In his appearance that night, he mentioned a fearful premonition he had the day he was injured. Before going to work, he told his wife and children that he believed he was going to be shot that night.

“In the middle of a gun battle that’s all I could think about,” Brandt told the council.

“Can you imagine telling your kids before you go to work that you’re going to get shot? Well, that’s what our police officers deal with every day,” he said.

“I’m not complaining, but I just want you to know what it’s like, the life of a police officer,” he said.

McBroom delivered the eulogy. He said that after the shooting, God gave Brandt a chance to spend 12 more days with his family.

McBroom said Brandt understood his responsibility to his children and often read his children stories from the Bible and other books with lessons about morality, character and the need to work hard.

"No matter how busy he was, I always admired that Allen carved out time to teach and mentor his children," he said. "It wasn't just an obligation for him. He had a deep burden for his children to come to know God and be superior in their character."

McBroom said Brandt would not fudge the truth. When he took a polygraph test before becoming an officer, he tested the patience of the examiner by the extent to which he strove for accuracy. McBroom said he wanted to ensure "there wasn't an ounce of dishonesty in anything he said."

McBroom said Allen and Natasha, who met each other as students at the University of Alaska Fairbanks, loved each other, of that there was no doubt. But he heard them say countless times over the last 11 years how much they liked each other.

They would show that in big ways and in the smallest — such as the detailed notes Natasha would attach to the assortment of Tupperware containers he took with him for lunch or the love songs Allen would sing to her.

"Blinded in one eye, he managed to pry his other eye open just enough to see her the day after he was shot and comment on her supermodel jaw line with a tender smile," McBroom said.

"I sat in the hospital with Natasha on the night that Allen passed," McBroom said. "And she told me that she wanted her and Allen's love story to be shared: Her statement was this: 'He's on loan from God. He's not mine. But I sure have loved our time together. I got to live a real-life fairy tale.'"