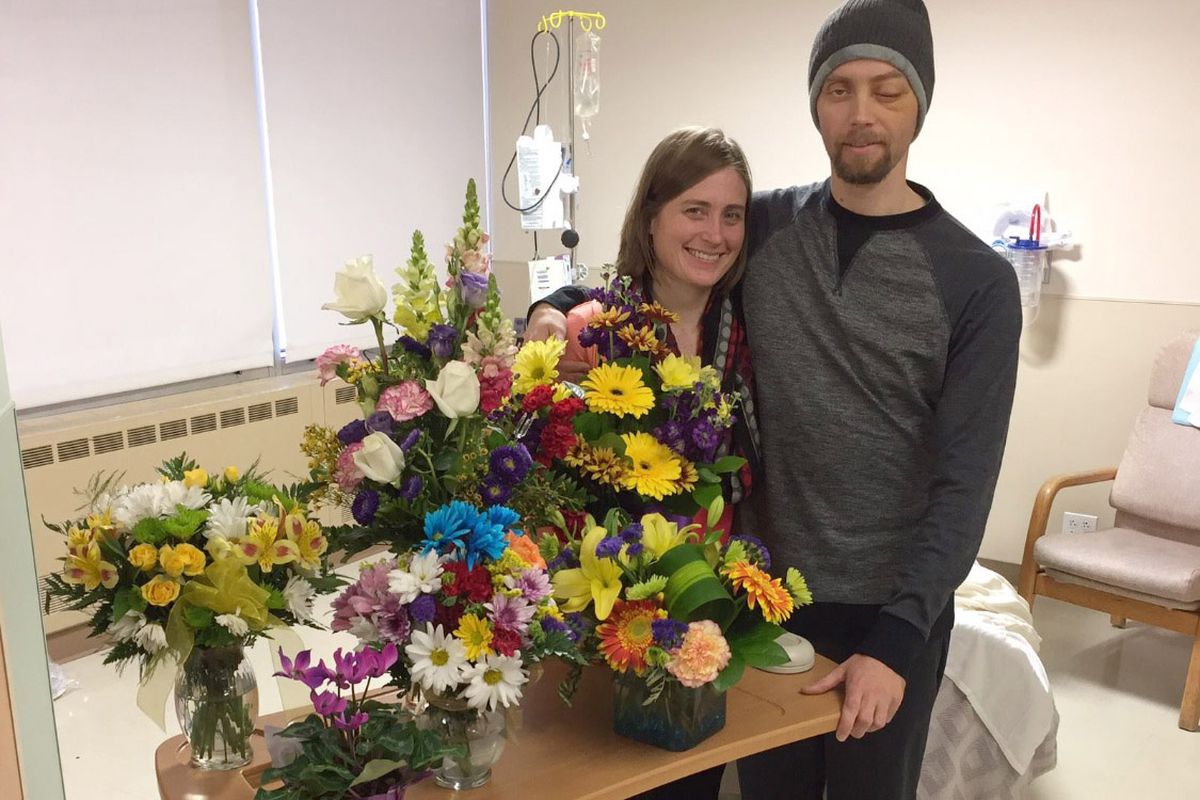 Natasha and Allen Brandt pose for a portrait before Allen’s release from an Anchorage hospital. Allen was shot while on duty with the Fairbanks Police Department. (Courtesy of Brandt family)

Natasha and Allen Brandt pose for a portrait before Allen’s release from an Anchorage hospital. Allen was shot while on duty with the Fairbanks Police Department. (Courtesy of Brandt family)

FAIRBANKS — Before he went to work that night, Fairbanks Police Sgt. Allen Brandt gathered his four young children on his bed and read them a story, an important family ritual.

When he said good night to his children and goodbye to his wife Natasha a week ago Saturday, it was not with his usual enthusiasm.

"I think I'm gonna get shot tonight," he told them.

Brandt, 34, is a religious man, who cherishes his family and is a dedicated officer, as those who know him will tell you. Despite his misgivings that night, he went to work as usual and when a report came in that shots were fired a few blocks from the city police station, he checked it out.

Brandt slowed his patrol car as he approached a pedestrian. In an instant, the man dashed in front of the car with a gun in his hand. Brandt opened the door to get behind the police car for protection and the man opened fire, hitting him five times in the legs and once in the chest.

The shot in his chest, near his heart, was stopped by a bullet-proof vest. Two bullets grazed him and three others are still inside. In a flash, he remembered what he had told his family.

"In the middle of a gun battle that's all I could think about," said Brandt, who told his story to the Fairbanks City Council Monday night.

Natasha hung up on the first two people who called her to say her husband had been shot, thinking that Allen was playing a practical joke. "She thought it was a cruel joke. I wouldn't have done that to her," he said.

"Can you imagine telling your kids before you go to work that you're going to get shot? Well, that's what our police officers deal with every day," he said.

"I'm not complaining, but I just want you to know what it's like, the life of a police officer," he said.

Brandt, who may still lose an eye because of a piece of shrapnel, said he believes he's seen the "hand of the Lord in my situation."

Two bullets grazed him in the legs and the other three did not hit arteries or bones. The surgeons did not remove the three bullets left inside to prevent further damage.

"Can you believe I was shot five times through the legs and I walked into this room?" he said to a round of applause in Fairbanks City Hall.

He walked out as well, but only after the council approved a resolution thanking him and honoring his dedication.

In a posting earlier on Facebook, Natasha said, "We have seen a miracle from God in saving Allen's life. Continue to pray for a miracle in healing his eye."

In his remarks Monday, Brandt said that every police officer knows the pressure of having to be on guard at every moment, whether it's a visit to the grocery store or work outside of his house. It's the responsibility of carrying a weapon and being mentally prepared to have to use it with no time to think.

The 29-year-old man who is locked up on attempted murder charges in connection with Brandt's shooting offered some gratuitous advice to the officer last week in an apology: "Choose a safer line of work. Be there for your loved ones."

Dangerous jobs, like that of a policeman, will forever be with us. They should be entrusted only to those who are trustworthy, dedicated and principled.

Without Brandt and others like him, none of us would be free to pick a safer line of work and be there for our loved ones.