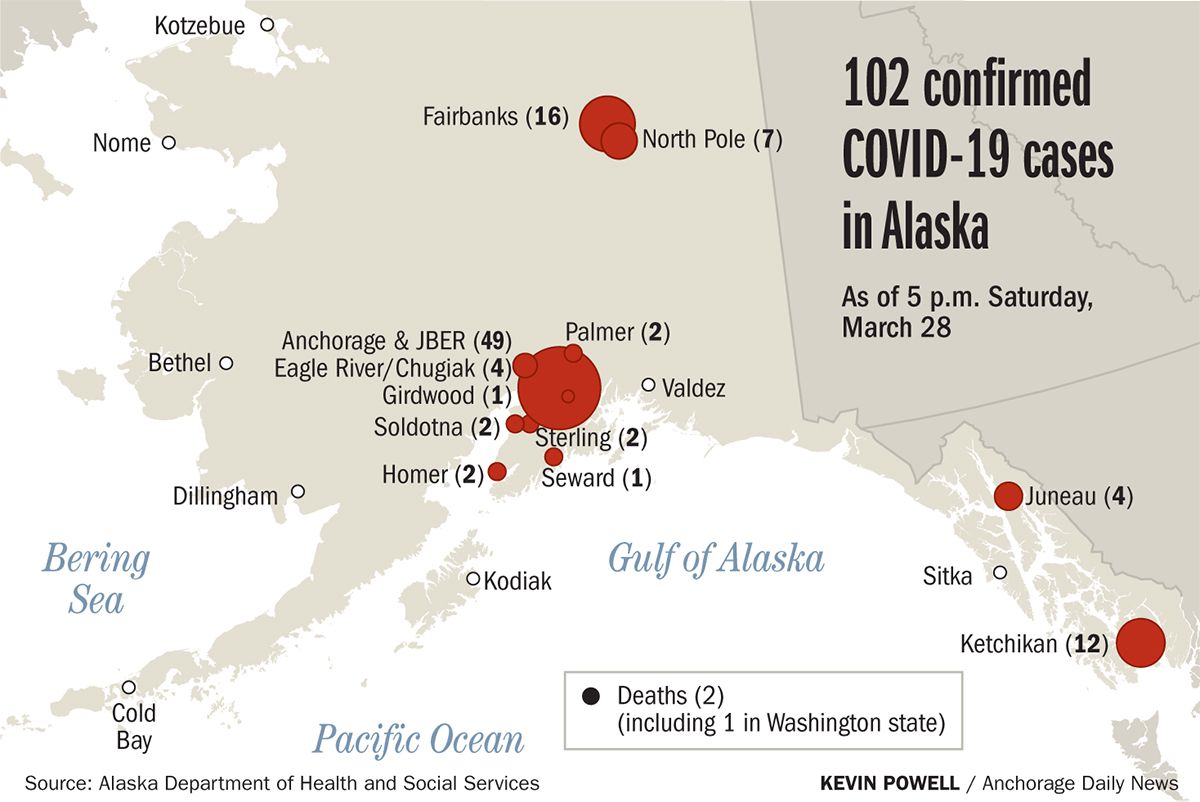 The number of people who tested positive for the disease caused by the new coronavirus in Alaska continued to climb Saturday, according to the state’s health department.

There were 102 confirmed cases of COVID-19 in the state as of Saturday evening. That number includes six people who have been hospitalized, according to officials, and at least one person in a Fairbanks care center whose case prompted the testing of all residents and staff members at that facility.

There were 10 new cases in Anchorage, three in Fairbanks and one each in Eagle River-Chugiak, Homer, Soldotna and North Pole. By Saturday, a total of 3,334 people had been tested for the virus in the state, according to the Alaska Department of Health and Social Services.

Ten of the new cases are still being investigated by public health officials while two are travel-related and five are tied to previously confirmed cases, according to a statement from the state health department.

Of the newly announced cases, five involve people 60 or older, nine are between the ages of 30 and 59, two are between 19 and 29, and one is a child. The new cases include seven men and 10 women, the release said.

Two Alaskans have died as a result of the illness caused by the new coronavirus, including a 63-year-old woman with underlying medical conditions who died at the Alaska Native Medical Center in Anchorage and a 76-year-old Petersburg man who died in Washington state.

The steady rise in COVID-19 cases comes after Gov. Mike Dunleavy on Friday announced restrictions on in-state travel as well as a statewide shelter-in-place mandate. As of Saturday at 5 p.m., intrastate travel was banned and Alaskans were ordered to stay home. Grocery shopping and outdoor activities are still permitted under the shelter-in-place mandate, provided that a distance of 6 feet from others is maintained. Seeking health care is allowed, though businesses deemed nonessential must close to the public.

The mandates follow a statewide closure of schools through May 1, and other orders issued by individual boroughs and municipalities instructing residents to stay home. A “hunker down” emergency order in Anchorage was extended to mid-April, though Mayor Ethan Berkowitz said it will likely continue beyond that date.

State officials have expressed concern over a possible surge in patients overwhelming Alaska’s health care system, which is why they have continued to urge increased hand-washing and social distancing to stem any rapid spread of COVID-19.

On Saturday, hospital officials told reporters that a resident at Fairbanks’ Denali Center tested positive for the disease caused by the new coronavirus. The resident, a woman over 80, was tested for COVID-19 after a staff member she had been in close contact with tested positive, officials said.

When the resident was tested Wednesday, she had mild symptoms including a low-grade fever, said Dr. Daniel McCulley, medical director at the facility.

Because the illness can progress quickly, McCulley said the resident is being closely monitored and will stay at the Denali Center, per the federal Centers for Disease Control and Prevention guidelines. "She is still only mildly symptomatic,” he said.

The facility is monitoring residents and staff for symptoms of the illness, taking their temperatures daily and asking them about any potential symptoms, said Liz Woodyard, Denali Center administrator.

All residents — ranging in age from 20 to 99 — and staff at the Denali Center are being tested for the virus, Woodyard said. There are currently 75 residents and 135 staff members, according to Woodyard.

The decision to test everyone at the Denali Center was made after consulting with the state’s Section of Epidemiology on Friday, McCulley said.

A prioritized group of samples from residents and staff will be tested for COVID-19 on Saturday, Ramirez said, and the facility expected to receive those results the same evening. The state’s public health laboratory in Fairbanks will run the tests, Ramirez said. Additional test results were expected early next week.

The facility had previously suspended all visitors. All residents are now being asked to wear masks and isolate themselves in their rooms. Staff members will wear full personal protective equipment, including gloves, masks, gowns and face shields, while caring for patients, Woodyard said.

The facility has enough equipment to care for residents and protect staff, Ramirez said.

“Maybe we could have done more, you always probably could," said Ebenal, the Foundation Health Partners CEO. “But I have got to say, our facility has been on this, and they have been working hard.”

The state’s epidemiologist, Dr. Joe McLaughlin, said in a statement that the long-term care facility was "doing an excellent job of responding swiftly to mitigate the spread of COVID-19. They are working closely with our epidemiologists to determine which residents and staff are at highest risk for exposure and implementing control measures that are consistent with national guidelines.”