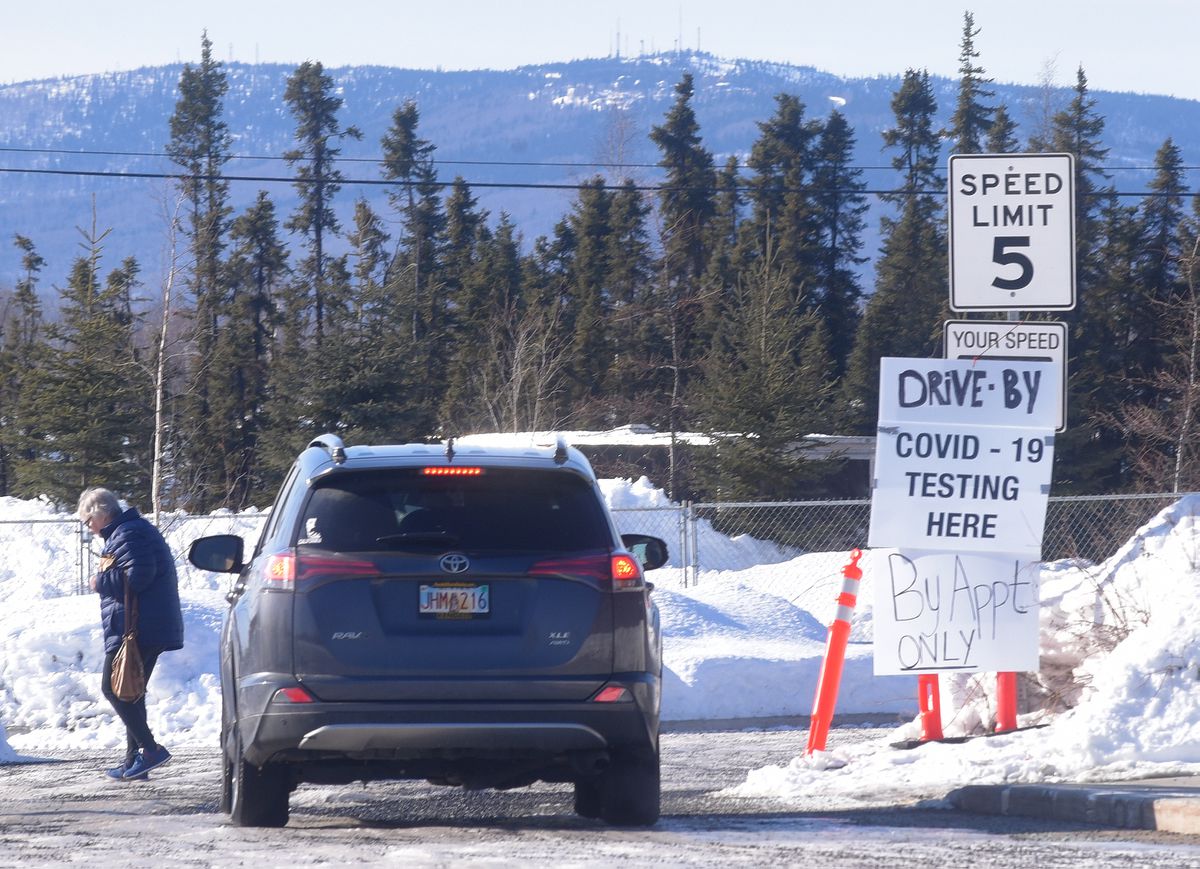 A sign directing patients to drive-by COVID-19 testing in the parking lot of the Chief Andrew Isaac Health Center in Fairbanks on March 31, 2020. (Photo by Eric Engman)

A sign directing patients to drive-by COVID-19 testing in the parking lot of the Chief Andrew Isaac Health Center in Fairbanks on March 31, 2020. (Photo by Eric Engman)

COVID-19 cases and hospitalizations are trending down in Alaska — but not in Fairbanks, which is now experiencing its worst coronavirus outbreak so far since the pandemic began.

The Interior region’s recent surge in cases — and now hospitalizations — is largely being driven by younger, unvaccinated Alaskans, and is stretching Fairbanks Memorial Hospital’s capacity and staffing to a breaking point, health officials said Wednesday.

“I wish we were at a point in the pandemic where we were not talking about hospital systems being overwhelmed, but currently the Fairbanks region is pushing that limit right now,” Dr. Anne Zink, the state’s chief medical officer, said during a public information call this week.

In the last week, the number of Fairbanks Memorial hospitalized patients — and those on ventilators — doubled, Zink said. State data showed that by Wednesday, over a quarter of hospital patients in the Interior region were COVID-19 patients, compared to just over 5% of hospital patients statewide.

The hospital’s increasing number of patients plus its limited supply of respiratory equipment and limited hospital staffing means providers may soon need to start medically evacuating patients to other hospitals around the state, said Dr. Angelique Ramirez, chief medical officer with Foundation Health Partners, during a Wednesday interview.

“We are very concerned, though, about reaching capacity,” she said. “What we know is that outcomes are bad for all patients once a hospital is overwhelmed,” she said.

No single outbreak or source has been linked to the recent rise in cases in Fairbanks, said Dr. Joe McLaughlin, Alaska’s state epidemiologist. “We’ve seen cases and clusters associated with a wide range of settings, like family gatherings, churches, bars, restaurants, grocery stores, schools and sporting events,” he said.

But there does appear to be a possible link between the region’s low vaccination rate and its high case rate, officials said. By Wednesday, about 40% of eligible Fairbanks residents had received a single dose of the vaccine — well below the state’s average of about 54% — and the region also had the highest case rate in the state, at 49.26 cases per 100,000 residents.

“The demographic that we’re seeing now are people who have not been vaccinated,” Ramirez said. “Some of those are people who just haven’t gotten around to get the vaccine. But some are individuals who don’t believe in the vaccine, don’t want to get it. They let our staff know.”

Ramirez noted that some patients refuse to acknowledge that they have COVID-19.

Another clear pattern emerging in Fairbanks is that many of the coronavirus cases and hospitalizations there involve younger people, between 18 and 40 years old, Zink said.

For most of the pandemic, older Alaskans — whose age put them at a higher risk for severe illness from the virus — made up the largest share of the state’s hospitalizations. That trend has started to shift recently, now that a high percentage of Alaska’s oldest residents (who were first prioritized for the vaccine) are fully vaccinated, said Anna Frick, an epidemiologist with the state health department.

“Our average age of hospitalization is now much younger than it used to be,” she said.

Younger, healthier patients tend to be hospitalized for longer, Ramirez said, because they are often able to fight off the virus rather than succumbing to it. And while “this is a good problem to have” because it means patients are more often living rather than dying, it means the hospitals are more likely to become full, she said.

Young people with the virus don’t always survive. A COVID-positive patient in their 20s being treated at Fairbanks Memorial Hospital did die this week, Ramirez said.

[Meet the coronavirus vaccine skeptics who changed their minds]

Zink said the state health department will keep supporting the hospital by providing the resources they need, by making sure the region is doing enough testing — the test positivity rate in the region doubled recently — and by continuing to address vaccine misinformation through public forums and public information campaigns.

Ramirez said she was hopeful that the high rates of COVID-19 hospitalizations might act as a nudge for those who haven’t opted to get vaccinated yet.

“One of the things that we’re learning through this surge is that the vaccines work,” she said. “We are not seeing admissions of vaccinated individuals. So it’s kind of a backwards reinforcement that vaccines really do work.”