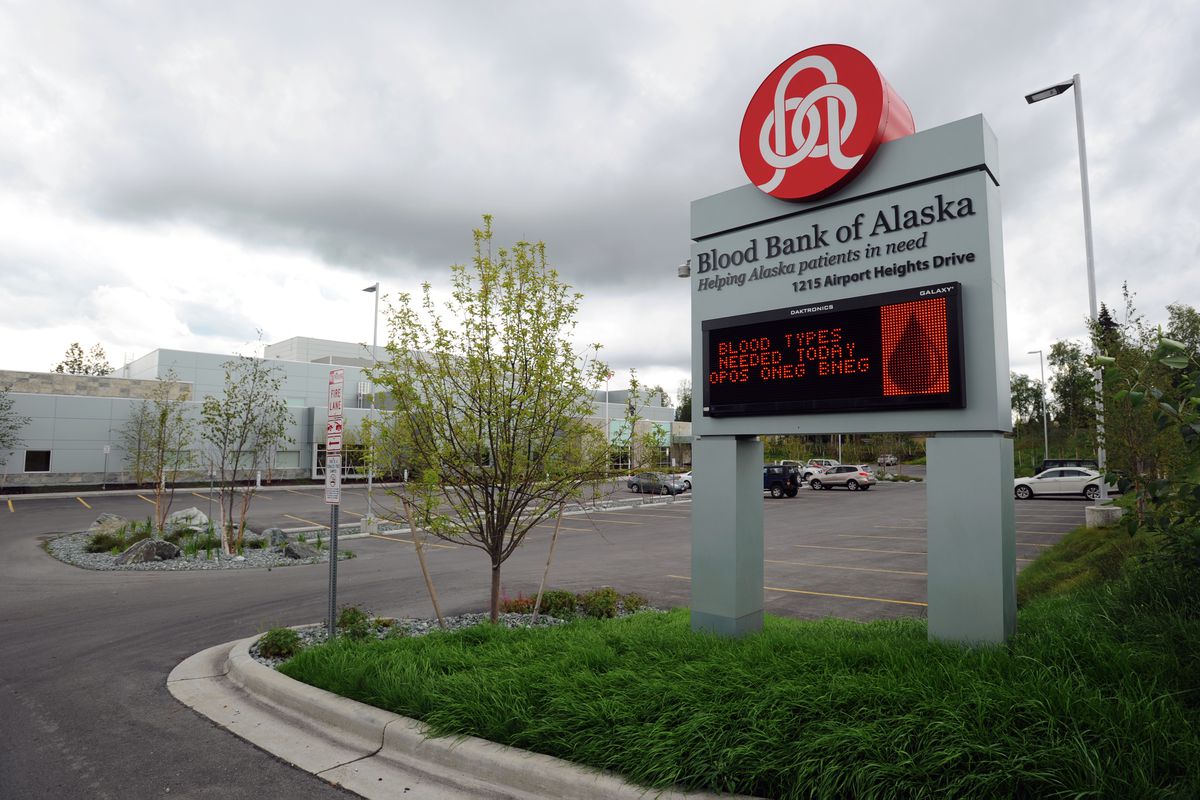 Blood Bank of Alaska employees have filed a complaint with the FDA, saying it was shipping blood donations out of state for a fee so it could afford payments on its new building. (Erik Hill / Alaska Dispatch News file)

Blood Bank of Alaska employees have filed a complaint with the FDA, saying it was shipping blood donations out of state for a fee so it could afford payments on its new building. (Erik Hill / Alaska Dispatch News file)

The Blood Bank of Alaska said Friday it had launched an internal investigation after a complaint was filed by employees who said it was shipping blood donations out of state for a fee so it could afford payments on its new, 57,000-square-foot, $45 million building.

The Alaska Journal of Commerce first reported Wednesday that a group of Blood Bank of Alaska employees had filed a complaint with the U.S. Food and Drug Administration. The complaint, dated Aug. 28, says the blood bank had dangerous shortages of blood in Alaska throughout the summer due to "excessive exporting," according to a copy of it posted online by the Alaska Journal of Commerce.

Ashere Chait, the blood bank's marketing and communications director, declined to say in an interview Friday which allegations the blood bank had determined to be untrue.

"At this point we're not getting into specifics about it just because it's an ongoing investigation," Chait said. She said she did not know if the internal investigation's findings would be made public upon completion.

"We're not trying to hide anything," she said. "It is my belief that none of them are going to be found true."

Chait said the blood bank, a nonprofit, would not be giving any media interviews Friday. She said she believed the statement addressed "any concerns." The statement was also sent to the blood bank's blood donors, she said.

The August complaint filed with the FDA was signed by Linda Soriano, identified in the document as the BBA's development manager.

The complaint said the BBA's most significant problem was its "severe and ongoing lack of inventory" due to its weekly shipments of at least 100 units of blood products out of Alaska. The BBA serves nearly all of the state's hospitals.

"The decision to export was made because BBA cannot afford the interest-only payment of $40,000-$47,000 a month on a line of credit (now fully expended) of $8.5 million from the Alaska Industrial Development & Export Authority (AIDEA)," said the complaint.

[Alaska Blood Bank is shipping excess blood to California, for a fee]

The blood bank moved into its new, 57,000-square-foot building in February. To pay for the East Anchorage building, BBA relied largely on about $33 million in state funding, appropriated by the Legislature over several years, and an $8.5 million loan with AIDEA, a state low-interest lending agency.

Chait said in August that the blood bank had to take out the loan after it fell behind on its philanthropic fundraising goal and following the failure to find a buyer for its old building. She said the new building was originally supposed to be constructed debt-free.

Karsten Rodvik, AIDEA external affairs officer, said in August BBA had made monthly interest-only payments to the agency since November 2015 of between about $15,600 and $41,000. In an email Friday, Rodvik said the complaint had not affected AIDEA's loan to the blood bank and the blood bank had not yet missed a monthly payment.

"We're not aware of any issues whatsoever with the loan," he said. "The loan is current, and we will continue to monitor it as we do with all of our transactions."

In May, the blood bank started to ship blood under a contract with LifeStream, a nonprofit blood bank based in Southern California. BBA agreed to export 100 units of blood each week to LifeStream — shipping out, on average, one-sixth of what it collected.

BBAl officials in August refused to disclose a copy of the contract with the California blood bank and refused to say how much it paid. BBA CEO Bob Scanlon said that information was proprietary. The contract runs through December.

In interviews this summer, Scanlon and board member Chris Mello said the blood bank was sending surplus Alaska blood to California as a way to ensure the blood got used before it was too old and had to be thrown away. Scanlon said the blood bank stepped up donor recruitment this year, anticipating a greater need of blood because of factors such as the spread of the Zika virus.

The complaint claimed BBA pushed for more blood donations because of the blood exports.

Scanlon and Mello declined to comment on the complaint Friday.

"The statement is the statement and that's about as far as we're going to go at this point," Scanlon said.

Soriano, who signed the August complaint, said in an interview Friday that the complaint was an attempt to get a problem fixed. Soriano said she worked as a consultant for the blood bank starting in 2012 and was hired by BBA as an employee in early 2015. She said she would not release a copy of the complaint.

"This is absolutely not an attempt to hurt the blood bank or its reputation, it's just to get the problem solved," Soriano said. "Everyone involved wants us to have a functioning blood bank in Alaska."

"We operate ethically, responsibly and with the utmost integrity," the statement said. "We are confident in the quality, safety and availability of the blood and blood products we collect."

Lyndsay Meyer, press officer with the FDA, said in an email Friday that the FDA evaluates each complaint with the agency and determines the appropriate follow-up based on the seriousness and frequency of the violation reported. She said the FDA cannot comment on the status of a specific complaint and whether it's conducting an investigation.

Meyer said while the FDA regulates some blood bank activities, it does not specify a minimum inventory of blood BBA or other banks must maintain.

In August, Mikal Canfield, Providence Alaska Medical Center spokesperson, said BBA had always filled the hospital's order this year. Kelly Atlee, spokesperson for Fairbanks Memorial Hospital, said in an email Friday the hospital had a "very good working relationship with the Blood Bank of Alaska — and it's one that's existed for many years."

But the complaint from the employees asked the FDA for help. It said any backup for the blood supply in Alaska depended on air transport to get here.

"Military jets can take samples to be tested in Seattle, but in a mass casualty event people would die because of the delay," said the complaint. "At this time, we couldn't handle a bad highway accident, and (blood bank chief executive) Mr. Scanlon's willingness to operate at this level of risk is incomprehensible to me."