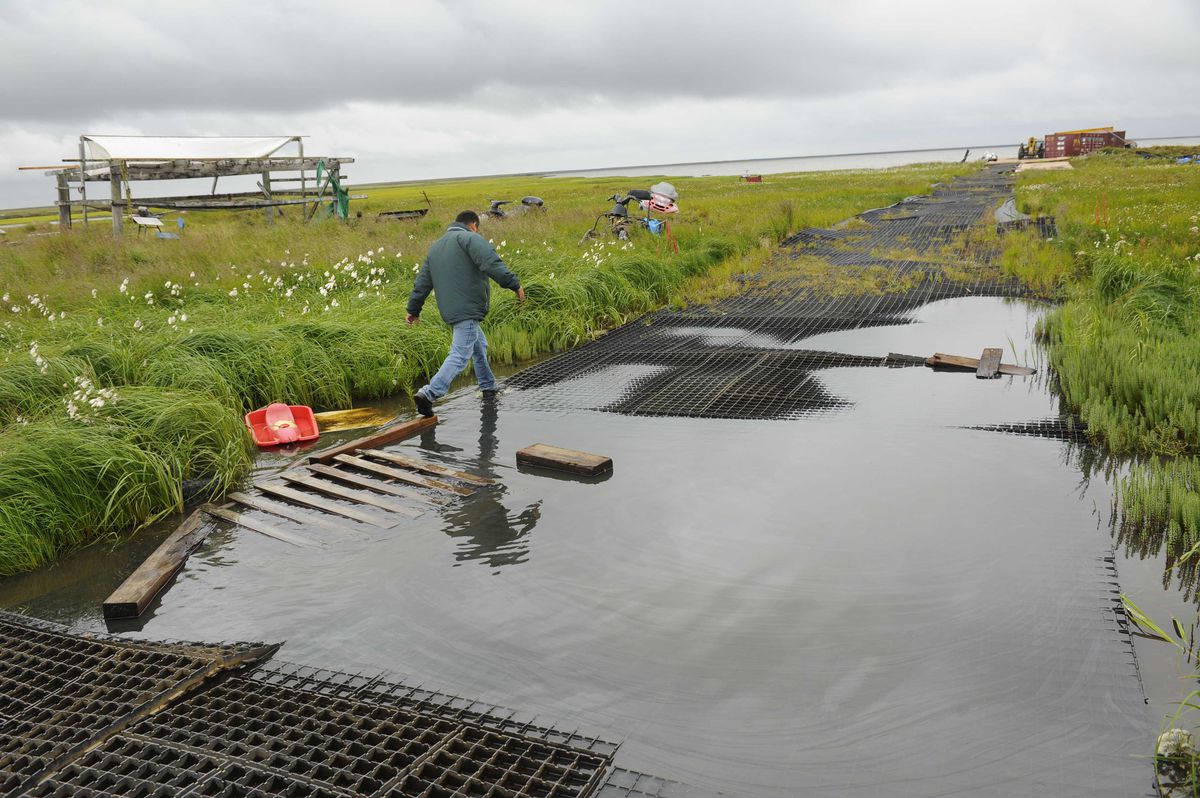 Stanley Tom skirts water on walkways made of mats in the village of Newtok on Aug. 14, 2009. Tom says the eroding Ninglick River and melting permafrost are forcing the village to relocate. (Marc Lester / ADN)

Stanley Tom skirts water on walkways made of mats in the village of Newtok on Aug. 14, 2009. Tom says the eroding Ninglick River and melting permafrost are forcing the village to relocate. (Marc Lester / ADN)

On Monday, the state Division of Public Health released the first comprehensive report about the adverse health impacts climate change could have on Alaskans.

The sweeping list of potential health implications include the introduction of new diseases; an increase in accidents; an increase in anxiety and depression; a worsening allergy season; and increasingly dangerous hunting and harvesting conditions limiting subsistence activity.

State health officials say the 77-page report is meant to raise awareness of how climate change could impact public health in a state where, over the past century, the air and water temperatures have warmed faster than the rest of the country.

[Alaska just had its warmest December on record]

"We wanted to get ahead of the potential health impacts of climate change in Alaska and make sure we could provide a big-picture perspective on what we can expect if the (National Climate Assessment) prediction models are accurate," said Dr. Joe McLaughlin, state epidemiologist at the Alaska Department of Health and Social Services.

McLaughlin said the division started working on the report in 2015.

While there were analyses of the potential health impacts of climate change in certain Alaska communities, a detailed statewide report did not exist, said Sarah Yoder, lead author of the report and a public health specialist in the Environmental Public Health Program at the department.

A statewide report on how climate change could affect health is still rare in the U.S.

"This report is one of the only reports, really, nationwide that provides a statewide overview of the potential health impacts of climate change," Yoder said.

Because Alaska is the country's only Arctic state, the report said, Alaskans will likely face some climate change challenges that will differ from those in other states.

Here are just a few of the health impacts Alaskans can expect if the National Climate Assessment prediction models are "roughly" accurate, according to the report:

— Worsening mental health: Climate change can lead to "solastalgia" — the distress caused by unwanted environmental change. Anxiety, depression and post-traumatic stress disorder can also result from fires, floods, storm surges, thawing permafrost and coastal erosion, all of which are expected to increase with climate change.

— More accidents and injuries: The average annual precipitation is predicted to increase by 15 to 30 percent by 2100 in Alaska compared to 1971-1999. More precipitation could lead to more mudslides, debris flows and avalanches, causing more injuries and deaths. Car crashes may increase as thawing permafrost damages Alaska's roads, railroads, airstrips and trails. Thinning sea ice may also lead to more injuries or deaths if people become stranded or break through the ice.

— More wildfires: Wildfires are predicted to increase in size and intensity in Alaska, which could worsen air quality and increase the risk of lung and heart disease.

Rural Alaskans harvest about 34 million pounds of wild foods each year, James Fall, research director of the Division of Subsistence at the Alaska Department of Fish and Game, said in an interview.

Any threat to that food supply, he said, is a major problem. Climate change has already led to poor ice conditions, thawing permafrost and changing migration routes.

"One cannot understate the threat that these kind of rapid changes are having and could continue to have on especially rural communities in the state," he said.

In Utqiaġvik, the coastline is eroding, ice cellars are flooding and there's less and less sea ice, said Rosemarie Habeich, director of the North Slope Borough Department of Health and Social Services.

"It's overwhelming sometimes," she said. "It's scary when I think of it in terms of the enormity of it."

She said she believes the town is already seeing elements of depression and anxiety. People can't always do what they once did, she said, like hold bonfires and picnics on a nearby beach that has now disappeared, covered by the sea.

Yoder said climate change will impact Alaska communities in different ways. She and McLaughlin said they hope local communities will use the new report to prioritize the potential health impacts of climate change most relevant to them. For each impact, they said the communities should determine the expected timing and magnitude.

"Communities should prepare to help people cope with these changes," McLaughlin said.

Read the full report at dhss.alaska.gov.