‘We can make this a better place': Iowa police round up supplies and cash to better equip an Alaska village force 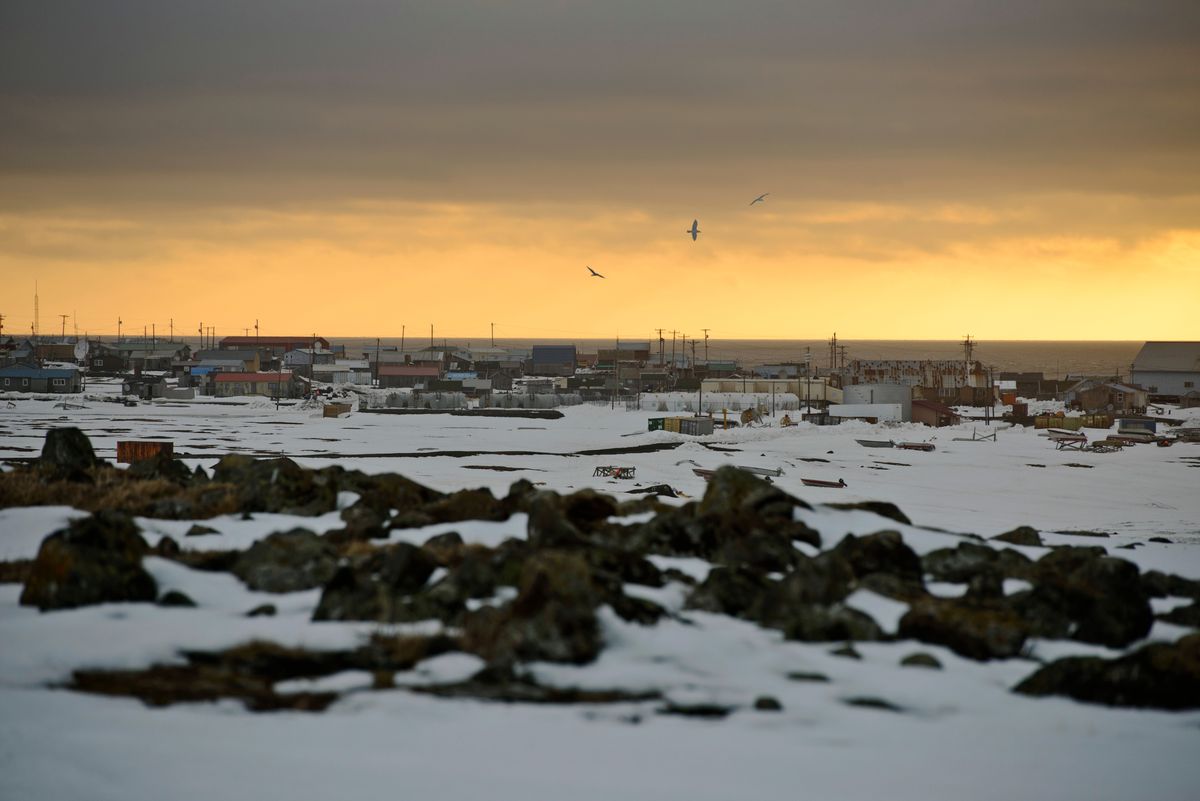 The horizon glows at sunset in this view over the village of Savoonga on April 22, 2017. The village of about 700 is on the northern coast of St. Lawrence Island in the Bering Sea. (Marc Lester / ADN archive)

The horizon glows at sunset in this view over the village of Savoonga on April 22, 2017. The village of about 700 is on the northern coast of St. Lawrence Island in the Bering Sea. (Marc Lester / ADN archive)

On Michael Wongittilin’s first day in uniform as a Savoonga police officer 11 years ago, a man walked into the village’s public safety office and pointed a gun at him.

Wongittillin jumped behind a desk and then lurched out, ran toward the assailant and bombarded him with pepper spray — the strongest weapon that Savoonga officers carry.

Savoonga sits on the coast of St. Lawrence Island in the Bering Sea. It’s closer to Russia than it is to mainland Alaska, and if officers there need backup, they have to wait until troopers can reach the island by plane.

The five Savoonga police officers don’t wear bulletproof vests or badges and they aren’t armed with guns or even Tasers, said Wongittilin, who is now the police chief. The village doesn’t have money to buy equipment — it’s been that way for as long as Wongittilin can remember. He grew up in Nome but was raised by his grandparents, who are from Savoonga.

But finally, things are about to change. Fifteen bulletproof vests, two stun guns and personalized name tags and badges will soon be headed for Savoonga thanks to an unlikely friendship between Wongittilin and a police officer three time zones away who he’s never met.

On a May afternoon, Peme Canas, a patrol officer with the police department in Davenport, Iowa, was scrolling through news articles at a restaurant during his day off. He saw a story from the Anchorage Daily News and ProPublica series Lawless, which focuses on sexual violence and a lack of policing in rural Alaska communities.

[Why remote Alaska communities that need cops aren’t getting them]

[A broken system of oversight for Alaska’s village police officers]

Canas was shocked to read that Savoonga officers had nearly no equipment.

“He doesn’t have a bulletproof vest or even a Taser — does that even still happen in 2019?” Canas said.

He was so stunned that he called Savoonga police to see if what he read was true.

Over 3,000 miles away in Savoonga, Wongittilin picked up the phone. “He just couldn’t believe it. But I said, ‘Yeah, it’s true.' We don’t have sidearms or vests. The only thing we have is pepper spray, handcuffs and a baton.”

The 16-year veteran of the Davenport Police Department isn’t a shy person. He said his favorite thing about being a police officer is talking to strangers and finding ways to help. He’s the type of officer who will spend his own money to buy and deliver groceries to a single mom who is struggling, because he thinks small things can change someone’s entire life.

And in Wongittilin’s case, Canas’ generosity could actually save a life.

Being a police officer is a dangerous and sometimes thankless job, the men agreed.

“If you’re a police officer anywhere, there are risks,” Wongittilin said. “You knock on a door and you don’t know what’s waiting on the other side.”

Wongittilin said he always hopes for the best when he responds to a call, but more often than he’d care to remember, he is confronted with a high-powered rifle or shotgun. Wongittilin said he’s good at talking people down, but that doesn’t mean he’s not afraid — he knows he’s bringing pepper spray to a gunfight.

Even with bulletproof vests, Tasers and guns, Canas said, there are still moments that catch him off guard.

“I don’t feel safe every day and I have all this technology," he said. "And he’s out there doing this without anything.”

Canas started fundraising by talking to his friends and family. He sent out an email to the roughly 170-person police force in Davenport, neighboring officers in Bettendorf, Iowa, and the Scott County Sheriff’s Department. Donations flooded in and the Davenport Police Department stepped up. The city bought 15 bulletproof vests, six of which are heavy duty, and donated two stun guns that were no longer in use.

“It means a lot,” Wongittilin said. “One of these days, one of these pieces of equipment is going to save my life or the lives of any of my five officers.”

Canas planned to spend some of the $600 he raised to buy personalized name tags for each officer to wear on their vest, but when he went to a local store to place the order, the owner gave them to him for free. She said she wanted to help, so she also placed an order for badges to stick on the vests.

The only remaining problem is how to get the 120 pounds of gear from Iowa to Savoonga. Canas said shipping costs nearly $600. He’s trying to find a sponsor for the shipping cost and said he could use the money he’s raised to cover it if necessary, although he really wants to spend it on more gear for the officers.

“We can make this a better place,” he said.

Since May, Canas and Wongittilin’s lives have become intertwined. Although they lead drastically different lives, they have a lot in common.

“I know you’re an officer and you’re risking your life every day,” Canas said about Wongittilin. “We make a lot of sacrifices in our lives to do that.”

The two men have become friends during the last seven months. Their wives talk and share photos on Facebook, and the families have sent each other gifts. Canas laughs as he recalls the matching T-shirt and coffee mug Wongittilin sent him that declare Savoonga the “walrus capital of the world.”

“I think we’re going to be friends for a long time,” he said.