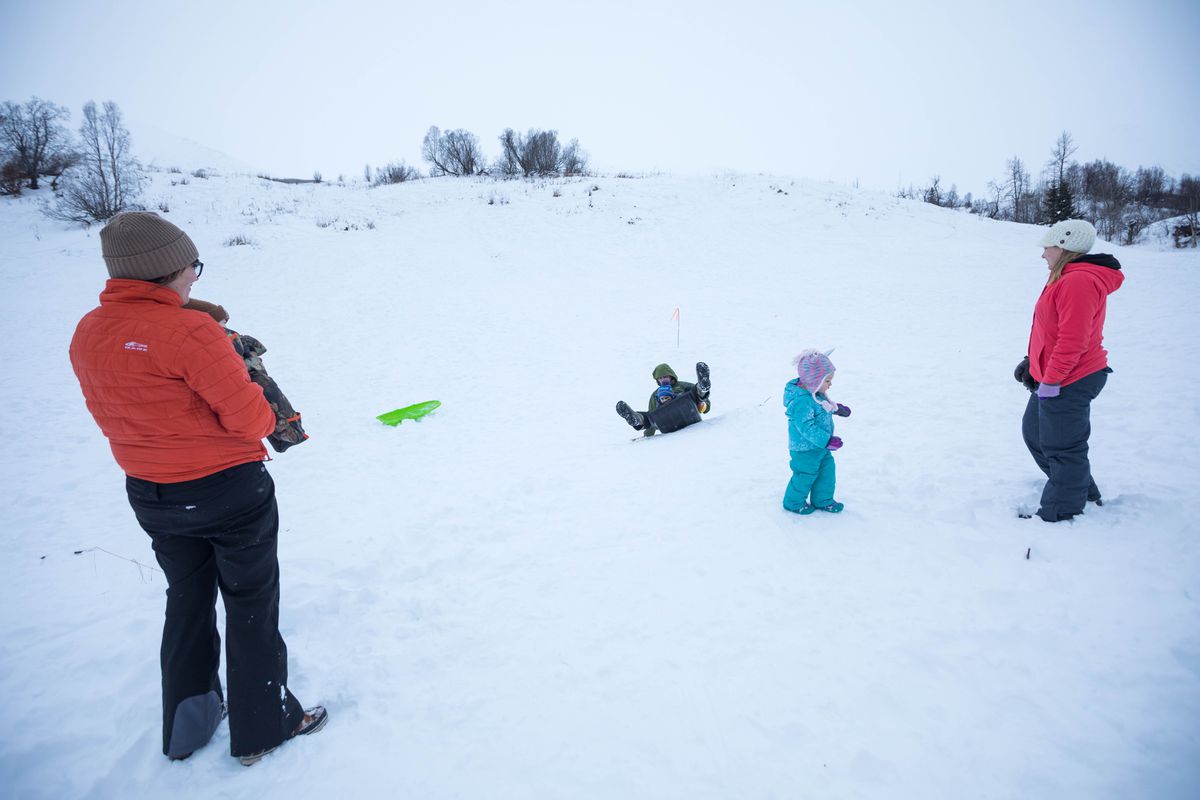 HATCHER PASS -- Until the late 1970s, skiers bombed down runs high in the Talkeetna Mountains at Hatcher Pass, cranked up the slopes by rope tows at Independence Mine.

The old-fashioned lifts disappeared, ushering in decades of corporate alpine resort proposals that fizzled despite the proximity of population centers Palmer and Wasilla just a 30-minute drive away.

Now instead of a big resort backer, it’s a grass-roots effort to restore lift-served skiing to Hatcher Pass that appears to be slowly moving ahead.

A family-oriented downhill area called Skeetawk about 10 miles up the Hatcher Pass road is scheduled to open next winter.

The nonprofit group behind it has leveraged more than $1 million in grant funding with hefty local sponsorships and donations, along with $100,000 in startup funding from the Matanuska-Susitna Borough.

The nonprofit, Hatcher Alpine Xperience, still needs about $750,000 more to make the first phase of the ski area happen, executive director Amy O’Connor said. But the group already has raised or received more than $1.3 million and bought a ski lift. The group has about 900 members, who make donations, but is also looking for local sponsors.

If Skeetawk succeeds, it will become a rarity in North America: a new ski area even as established resorts, especially in the mountains of the West, battle a mix of public-lands permitting hurdles and diminishing snowpack linked to climate change.

The last new ski area in the U.S. was Utah’s Cherry Peak Ski Resort, which opened in 2015, according to the National Ski Areas Association.

“The creation of a totally new ski area is not common. That is for sure,” said association spokeswoman Adrienne Saia Isaac. "That’s pretty cool, because you don’t hear about it happening too often,”

Right now, Skeetawk’s slopes are dominated by sledders given access to the area on weekends and school holidays.

But the goal is “to bring lift access to the Valley as soon as we can,” said O’Connor.

So, in a shift from the resort model that incorporates a lodge, restaurants, shops and other amenities, Skeetawk backers plan to start with a lift and build from there.

Plans for a first phase of development call for a 1,000-foot triple chair lift that rises about 300 feet and opens up about 30 acres of mostly beginner to intermediate terrain, with ski rental and food truck service. That’s what’s planned for next winter.

Matanuska Telephone Association, which is sponsoring ski patrol at the new area for three years, will also extend a fiber-optic cable to provide Wi-Fi and internet connection at Skeetawk, O’Connor said.

Six miles of downhill trails will be groomed starting in January, with help from a $13,000 grant from the borough, she said. There is a community terrain park build event scheduled for that month, too.

The new lift is expected to be installed this summer.

The next phase would involve a larger, mile-long high-speed quad lift rising about 1,200 vertical feet that would open up about 600 acres of terrain.

Initially, there wouldn’t be a day lodge. Instead, O’Connor said, the plan is to build slowly with a ski school and rental shop, making use of a local food truck and espresso stand for concessions. A day lodge is planned in the second phase of development.

She said the group expects 75,000 to 100,000 skier days a season -- that’s per trip rather than per person -- with users coming from Mat-Su but also parts of Anchorage, Eagle River and Chugiak.

“The goal is to learn to ski and snowboard someplace that is accessible and affordable,” O’Connor said.

The Hatcher Pass area was once home to numerous homespun ski lifts.

By the 1960s, skiers at Independence Mine rode up the mountain on rope tows -- including an infamous one with waist straps -- and a T-bar making use of the broad ridges above the abandoned gold mine. A miner’s bunkhouse offered lodging and meals, according to the website administered by the Alaska Lost Ski Areas Project. The U.S. Army biathlon team trained there. The old manager’s house became a bar and lodge for skiers and snowmachiners.

Former mine skiers remember staying in the bunkhouse, which smelled of the coal that heated it. One recalled the last run of the day: a downhill tuck down Hatcher Pass Road all the way from the mine to the hairpin turn at the former site of the Motherlode Lodge.

Another skier shared the harrowing experience of using that waist-strapped tow, designed to make the ride up easier on the hands. It was 10 or 20 below, Mike Besh told the project. He was “frantically struggling” to remove the tow hook from the rope around his abdomen. The hook finally popped off, flipped up, and hit Besh in the mouth -- where the cold metal instantly froze to his tongue.

Other tows were operated by the Turner family on the pass road at Fishhook Creek and at the Motherlode Lodge, according to a description of “the Hatcher Pass ski resort that never was” on the UAA/APU Consortium Library website.

That site describes the first of several major Hatcher Pass resort developments dreamed up but never realized, this one in the 1970s: a 6,300-foot ski lift to the top of the Palmer side of the pass capable of ferrying nearly 1,000 skiers an hour and connected to a chair lift or gondola from the Willow side.

At least three other similar proposals surfaced from the early 1990s until 2005, when Anchorage developer JL Properties pitched a regional alpine ski resort, commercial village and hundreds of new homes. None got off the ground.

Hatcher Alpine Xperience incorporated those past efforts in the form of lift locations, potential snowmaking reservoirs, and trail maps, O’Connor said. The area also tapped into electric connections partly extended to the site.

“We had the advantage where we were able to use the history of development ideas for this location,” she said. “That really gave us a head start.”

If Skeetawk does get up and running next winter, it will join a handful of Southcentral ski areas, such as Hilltop Ski Area, that provide easy or moderate trails for beginners.

The addition of lift-served slopes in Mat-Su can only help the skiing community by giving locals a nearby destination to get involved in the sport, said Russell Sell, owner of SkiAK in Anchorage. The ski shop supports Hilltop as well as Hillberg Ski Area on Joint Base Elmendorf-Richardson, Arctic Valley Ski Area, and Alyeska Resort in Girdwood.

“I think it’s admirable that they’ve really kind of grabbed the bull by the horns and took the public’s interest to market,” Sell said.