Miles to go before they ski: Backers of new Hatcher Pass alpine area hustle ahead of snowfall 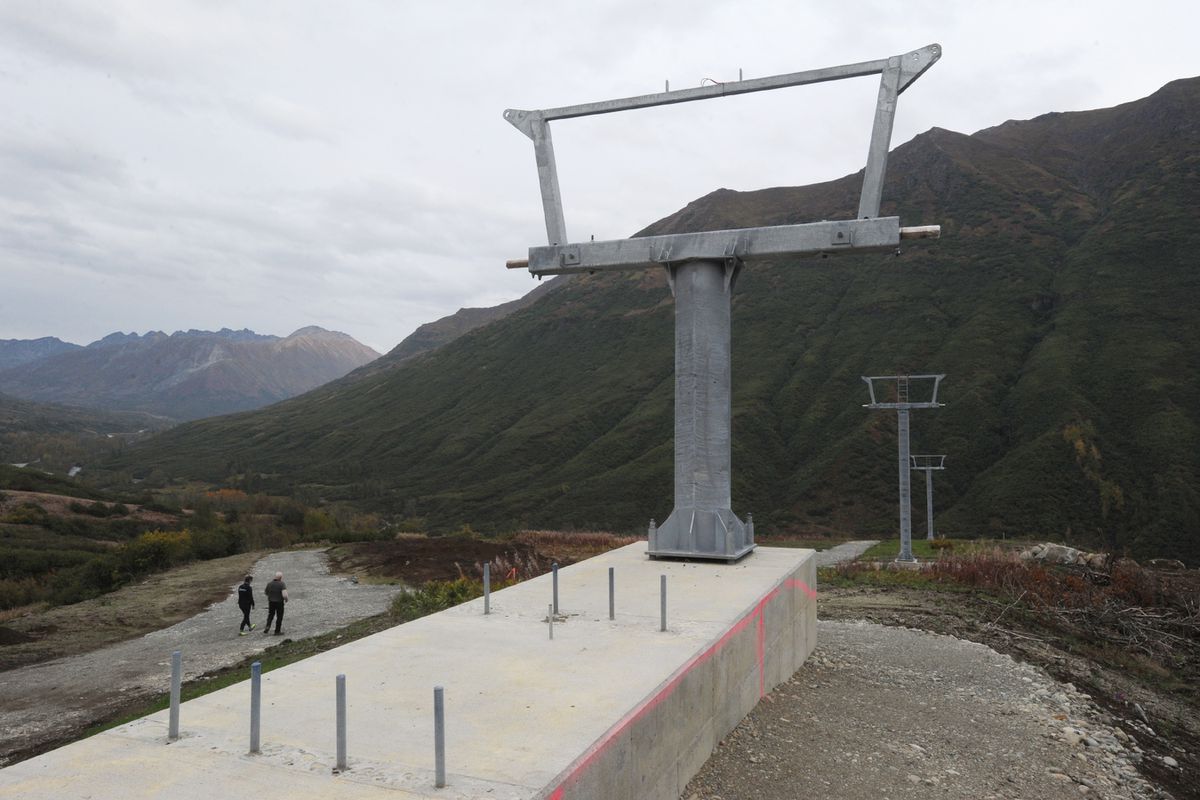 HATCHER PASS -- Skeetawk, rising in the Talkeetna Mountains north of Anchorage and one of the nation’s few new alpine ski areas, is scheduled to open in December.

The clock is ticking for Hatcher Alpine Xperience, the volunteer-powered nonprofit behind the small, family-oriented facility.

High on the slopes of Hatcher Pass, the cottonwood leaves are bright yellow, fireweed fluff is flying and temperatures are starting to drop.

Snow is coming -- it’s just a question of when.

“Eighty days,” Skeetawk board member Butch Shapiro said Thursday during a site visit, describing the “sobering” count he did earlier that day. “That was a reality check."

The area is known for early snow. But, forecasters say, that might be changing.

Towers for a triple chair lift coming in November extend in a steel line down the lower slopes of Government Peak.

The lift will provide access to a 1,200-foot run in beginner to intermediate terrain with nearly 400 feet of vertical drop. The skiable area is roughly the size of Hilltop Ski Area in Anchorage.

The next phase of development proposes a quad lift to more challenging runs and terrain. That may be five years off or more, however.

Skeetawk has the advantage of smaller scale, family focus, population size -- the Matanuska-Susitna Borough finally topped 100,000 residents several years ago -- and a passionate group of locals who believe it’s time for a lift-served area close to home, says Amy O’Connor, the nonprofit’s executive director and a former state parks ranger for the area.

The area will be the kind of place where kids can learn to ski and adults can find fun terrain without breaking the bank or driving all the way to Girdwood for the Alyeska Resort experience. This winter, it will be open weekends and school holidays and vacations.

A big blue yurt with picnic tables inside will serve as ticket counter and day lodge. Small huts will house operators at the top and bottom of the lift. A private contractor is providing grooming. A bidding process is underway for food trucks. The facility will rely on an outside contractor for rentals.

Asked what kind of use numbers are expected, O’Connor said maybe 175 people a day. It’s hard to tell until the first season gets underway, she said, and it becomes more clear if people show up more on Saturdays or Sundays, or depending on wind and weather, or all of the above.

“We don’t really know what our numbers are going to look like,” she said.

The road to Skeetawk takes off from Mile 10.6 of the Hatcher Pass road, an area used as a backcountry jumping-off point. Ski area supporters say they hope to work with the backcountry community and provide safe “skin-up” spots for skiers and lift access to runs down higher nearby peaks.

This is the third year of the effort to build the new facility. The nonprofit last year leveraged more than $1 million in grant funding with local sponsorships and donations after getting startup funds from the Matanuska-Susitna Borough and Fishhook Community Council.

There’s still a lot left to do.

Skeetawk hopes to have at least eight workers to open, a mix of paid and volunteer staff, O’Connor says. Lift operators need to be certified. Ski patrollers are being recruited.

The nonprofit is still trying to drum up sponsors for big-ticket items like towers and the yurt. They need skilled tradesmen in the short-term to finish work on facilities before the big open.

As with the coming crowds, the snow is another unknown.

Hatcher Pass and the jagged granite peaks of the Talkeetnas tend to get a drier snow than do the maritime-influenced Chugach Mountains at Alyeska. Ski season can start as early as late October. Cross-country trails high in Independence Bowl are generally the first groomed in Southcentral Alaska.

O’Connor said that in her days as a park ranger, she’s measured a 50-inch base. The facility also plans to make snow once funding and permitting are secured.

The trends for Hatcher Pass are good and bad: The average amount of snow is up. The average time it arrives is later.

The closest gauge, at Independence Mine above the area, shows 12 to 18 inches of snow on the ground by early November and not melting until the end of May, according to Kyle Van Peursem, senior hydrometeorologist with the Alaska-Pacific River Forecast Center.

An average of 200 inches of snow fell at Independence between October and April over the past 15 years, Van Peursem found. That’s up 30 inches. But the average temperature has also increased by 3.5 degrees.

Meanwhile, the number of days with a consistent foot or two of snow -- the depth that might determine a ski area opening -- has decreased to 200 a season because significant snowfall is delayed, he said. “It seems like winter’s just kind of starting later.”