The Glenn Highway Christmas tree is back ... and it’s brighter than ever 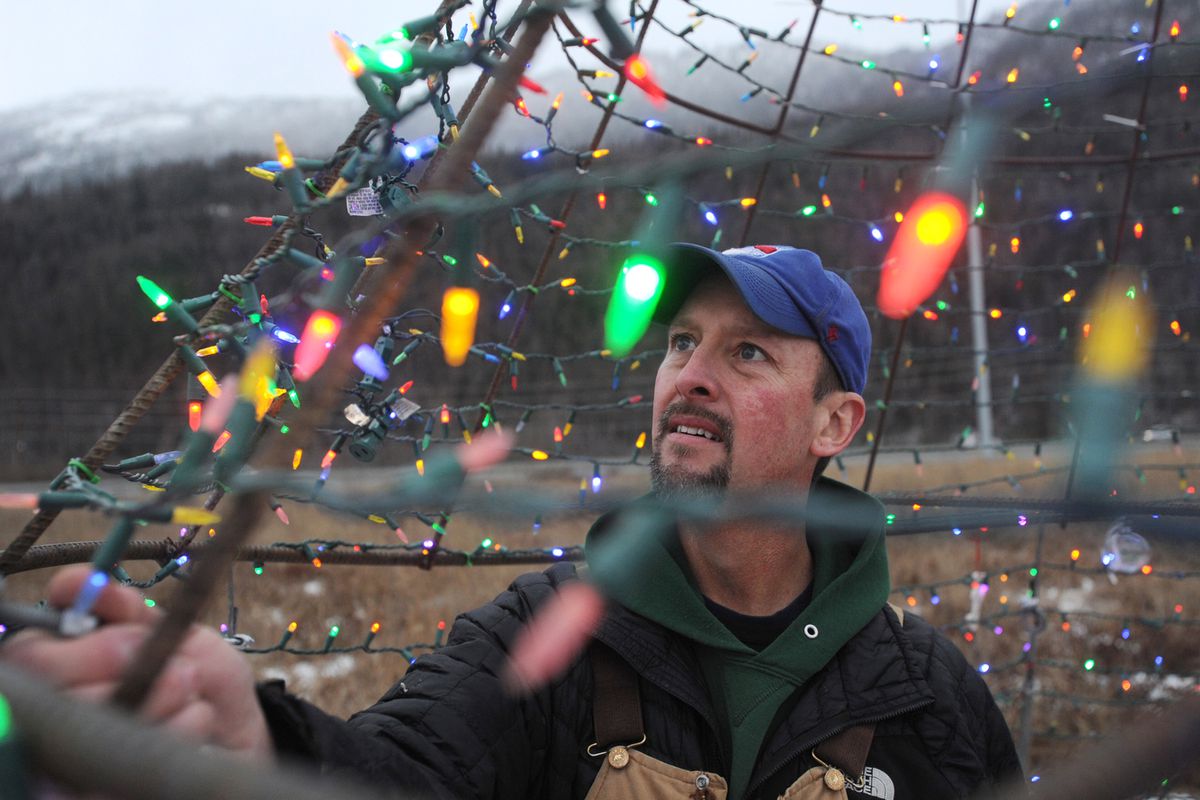 Jason Tolstrup checks the lights on the replacement Christmas tree along the Glenn Highway near the Old Glenn overpass on Wednesday. The original spruce tree has died, and the new tree will be lit for the first time on Thanksgiving Day. (Bill Roth / ADN)

Jason Tolstrup checks the lights on the replacement Christmas tree along the Glenn Highway near the Old Glenn overpass on Wednesday. The original spruce tree has died, and the new tree will be lit for the first time on Thanksgiving Day. (Bill Roth / ADN)

PALMER — For years, the bright battery-powered lights of the Christmas tree in the blackness of a swamp along the Glenn Highway cheered thousands of commuters on dark winter nights.

Then the Glenn Highway Christmas tree slowly died. The dead spruce was cut down this year.

Now the tree is reborn.

A metal marvel more than 20 feet tall rises in all its rebar glory from the Palmer Hay Flats with a big star on top and 675 feet of multicolored lights.

The tree will be lit Thursday night, after Thanksgiving dinner. It will stay lit all winter long.

“We’re going up to put ornaments on today,” Jason Tolstrup, the man behind the annual roadside attraction, said Wednesday morning as snow began to fall.

The Glenn Highway commuter community donates ornaments for the tree every year. Drivers leaves notes at a box nearby. The tree has its own Facebook group with nearly 1,400 members who share their gratitude for the joy it brings as they navigate the miles between Anchorage and Mat-Su.

“Your tree always makes me smile. It’s so improbable," one member posted. "And I love the story behind the tree. You guys absolutely rock!”

Tolstrup, a 48-year-old longshoreman, lives 7 miles up Knik-Goose Bay Road — 22 minutes from the tree, each way. His fiance and four children from ages 9 to 21 help with the tree.

He began helping with the lights about 14 years ago. A guy named Ben, with the help of a buddy named Lucas, started the tradition. But Ben’s work schedule made it tough to maintain the lights. Tolstrup showed up with an impressive battery setup he’d worked on through the summer and Ben handed over the reins.

Back then, the lights worked off a 12-volt battery that needed swapping out every morning and night. Tolstrup kept his identity a secret, telling only immediate family that he was the new highway Christmas tree keeper.

He moved up to 6-volt golf cart batteries. Then a buddy at work, a master electrician, devised a photocell to power the lights and reduce battery hassle.

Meanwhile, winds ripped at the lights. And flooding in a rainy December five or six years ago started killing the tree.

“You could tell the next summer it was dwindling," Tolstrup said. "Even putting the lights on the branches, they’d just fall off. It was leaning pretty hard.”

He cut down the tree earlier this year. His father, Vance, found a metal tree in Palmer and welded it into shape. Then he drilled a hole in the stump of the old tree, fit the pipe of the new tree into it, and fixed it with three cables augured into the ground. Tolstrup added six more cables, all angled like they’re part of the tree. Now he can climb up to the star.

Tolstrup made ornaments from the branches of the old tree that he sawed into discs and attached photos of the lit-up version, before its demise. He plans to hang some of them on the new metal version, and give others away.

These days, the tree needs enough bulbs to shine above the glare of the highway lights. But back when Tolstrup first spotted it, the highway was dark.

“I was driving by one December and the tree was lit up. There wasn’t many lights, just a couple strands, but there was no highway lights out there back then,” he said. "Just those few little lights made a big difference.”