A new balloon ride is planned for Talkeetna. Is it an innovative tourist attraction or a blight on the ‘sacred viewshed’ of the Alaska Range? 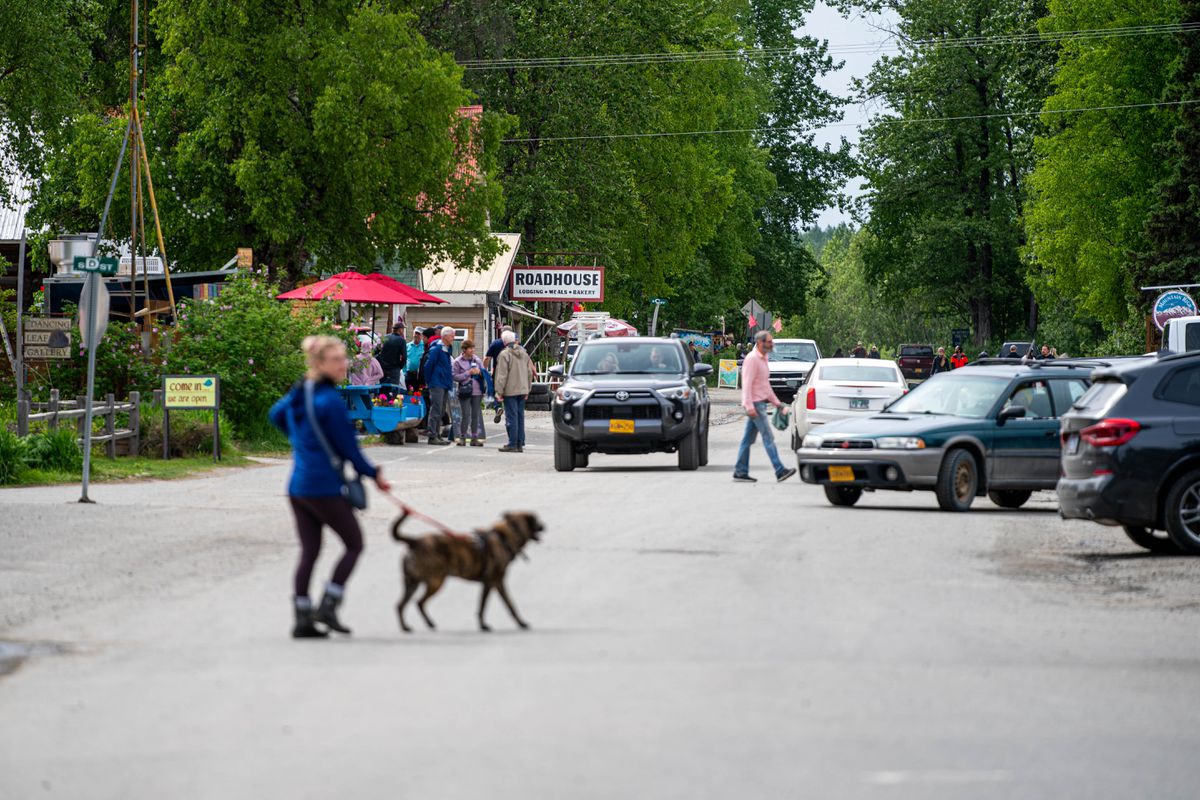 A new kind of visitor attraction could come to Talkeetna this summer: a 44-foot yellow helium balloon on a tether that takes passengers 250 feet off the ground.

The idea is the brainchild of five-time Iditarod Trail Sled Dog Race champ Dallas Seavey, who in 2018 moved his kennel to 100 acres just outside Talkeetna, a historic hamlet that’s the jumping-off point for climbers attempting North America’s tallest mountain, Denali, but also a major tourist draw.

Several hundred thousand summer visitors normally come through Talkeetna — almost half the population of Alaska converging on a place with fewer than 1,000 year-round residents.

Two years ago, Seavey started working on a way to bring a new kind of tourism to a town he now considers home and ran across the tethered balloon concept.

A 15-minute ride for maybe $25 or $30 a person — ticket prices are still being set — fills a niche for a cruise ship passenger on a tight schedule, looking to fill time after a scenic flight or river trip and a stroll down Main Street for food and gifts, he said. The balloon, rising about 30 stories into the air, should showcase views to Denali and the Alaska Range, as well as the confluence of the Susitna, Chulitna and Talkeetna rivers.

“What I’m excited to bring to Talkeetna is an experience that is accessible to everybody,” Seavey said. “It’s not a $350 flightseeing tour. This is something that is well within the reach of large families with young kids. There’s a lot of people that travel to Alaska and don’t have a $100,000 budget to do it.”

He hopes to start running the balloon this summer, though the exact date remains uncertain.

Before it’s even gotten off the ground, however, the attraction has sparked a local debate fueled by what some call a lack of official public process to respond to community concerns about privacy, aesthetics and aviation safety.

Officials at the local chamber of commerce say their mission seeks to balance a town that’s prosperous while retaining the unique character of this historic village with a mountain backdrop.

“Lots of planning was done many years ago ... where residents of all different viewpoints kind of hashed it out to find a direction of what we wanted the future in Talkeetna to look like,” said writer Sarah Birdsall, whose home sits near the launch site. “The future is kind of here and now. We never envisioned anyone wanting to put a big balloon up in the sky.”

This season, like many tourist-dependent towns emerging from last year’s pandemic shutdowns, Talkeetna is hoping for a recovery year.

The launch site is planned for a leased lot across from the Swiss Alaska Inn in east Talkeetna, a less developed, residential part of town compared to the bustling downtown core.

At the inn, a family-operated establishment with 21 rooms and a restaurant specializing in Alpine specialties like breakfast schnitzel, owner Chris Berg says he’s a fan of Seavey’s idea. The launch site is owned by Werner Rauchenstein, Berg’s father-in-law, who created the lodge in 1976.

The east Talkeetna area has more room for new business than the crowded confines of downtown, he said. “This is the side of town that’s probably going to start seeing some growth in the next 10 years.”

Some, however, say they worry the ride could mar Talkeetna’s stellar mountain views — one business owner called it the “sacred viewshed” — while allowing strangers to peer down on homes below.

Longtime residents say the attraction is the latest in a series of ongoing changes to Talkeetna but with a new threat to the iconic mountain views from town.

Talkeetna is no longer the quiet but quirky mountain hamlet long rumored to be the inspiration for the town of Cicely, Alaska, on the 1990s TV show “Northern Exposure.” Unruly crowds prompted the cancellation of the Moose Dropping Festival over a decade ago. Stubbs, the honorary “mayor” cat who lived at Nagley’s General Store, died in 2017.

Still, some locals see the balloon as a poor fit, saying it will bring a carnival air to town.

The attraction’s biggest problem is its potential to mar the sight of Denali, Mount Foraker, Mount Hunter and other Alaska Range peaks that give Talkeetna its sense of place, said Diane Okonek, who moved to a downtown home in 1983 when she co-founded Alaska Denali Guiding.

“That’s why people come here. That’s what a lot of businesses themselves depend on,” Okonek said. “It’s an attraction. It’s like a circus. That’s not rare at all, but the view ... that’s what’s precious.”

‘Not some kind of monstrosity’

Seavey, who acknowledges he’s “had a difficult time conveying the balloon is not some kind of monstrosity,” says he just wants the community to give the concept a chance. It’s practically silent, unlike the air taxis that drone overhead on a nice day. Trees should shield people’s yards from view.

“Why don’t you see before you judge?” he said. “I hear people talking about it as though it will blot out the sun.”

Seavey made presentations to the community council and chamber of commerce about the idea starting in April.

The yellow and white balloon has no writing or advertising on it, according to company information. It’s inflated with inert helium and will be tethered at ground level with a cable and winch system. The balloon won’t fly on windy days, Seavey said.

A special-use district overlaying much of Talkeetna and up the spur road off the Parks Highway prompted him to select the current launch site. But Big Dipper is “still looking at options” including other places near the current location.

Ideally, Seavey said, the ride will be in place by the Fourth of July. He said he’s willing to make changes to address legitimate concerns but also feels there’s a group of residents who are opposed to anything new.

“I would like to get it up even for a short time this summer,” he said. “I’m not trying to force anything. Again, I understand that, particularly in Talkeetna, you’re never going to be able to do anything without somebody having an objection.”

Along with privacy and view concerns, some also worry the balloon could create a hazard for pilots at nearby Talkeetna Airport, already buzzing with flightseeing planes in summer.

The balloon would go up about a mile from the center of the airport’s runway, according to Paul Roderick, who owns Talkeetna Air Taxi, an airport-based business that ferries climbers and flightseers. But it’s also near Talkeetna’s smaller village airstrip and a fairly busy floatplane lake east of the airport.

“Then you have another thing sticking up, even though it’s not necessarily in the same airspace we are,” Roderick said of the yellow balloon. “It’s just another thing in the airspace to keep track of, is the main concern.”

Pilots were “shocked” when the Federal Aviation Administration granted the operation a waiver from federal regulations governing balloons, he said. An FAA spokesman did not respond to requests for more information.

The FAA’s Seattle-based Western office granted the waiver, finding the AeroBalloon AB-5 is not an aircraft but an amusement ride.

The agency is requiring that Big Dipper notify the Talkeetna airport manager, Anchorage air traffic control and Talkeetna Flight Service Station when launches start; the station will issue a notice to pilots. In case the ride needs to be shut down quickly and air traffic controllers can’t reach an operator, the waiver may be suspended or revoked.

Every morning, plus at least hourly, operators must make sure there’s enough visibility and cloud height to send up the balloon.

Roderick and the group that owns the village airstrip, however, contend there are too many runways in the area to operate something as distracting as a balloon.

Seavey, in response to the concerns, asked why the FAA would sign off on a waiver if there were safety issues associated with the ride.

“All I can do is look to the FAA,” he said. “If they tell me this is a suitable place ... this is the federal agency that oversees this.”

Talkeetna’s community council in May asked the Matanuska-Susitna Borough to require a conditional use permit under the borough’s tall structures code before Big Dipper could start operations in Talkeetna.

Without the permit, some say there’s been little public process allowing residents a say before the balloon goes forward.

“They’re not taking into consideration not only opinions but concerns for safety,” said Alaska Mountaineering School co-founder Caitlin Palmer, whose home is separated by one lot from the launch site. “It just seems that it’s causing a lot of upset.”

Borough planners, however, don’t think the ride as planned this summer falls under the code.

The ride is only expected to run until September, Seavey’s attorney, Michael Schwarz, said in a May 20 letter requesting the exemption. The code defines temporary structures as those on site less than 180 calendar days and “not intended to routinely reoccur on the same site.”

Big Dipper considers this an exploratory operation to see if this kind of attraction is “financially viable,” Schwarz wrote. If so, Big Dipper plans to look for a permanent location and will seek a permit at that time.

Temporary structures are exempt from the tall structures code, according to borough planning director Alex Strawn, who helped draft a revised version of the ordinance enacted five years ago.

“Sitting at the meetings, it’s my belief that the intent of the group that redid the tall structures ordinance was temporary facilities that aren’t going to be there year after year would have an exemption,” Strawn said. He attended council meetings and is well aware of the community’s concerns.

An appeal period remains open on the exemption for 21 days after it was granted May 24.

The community council after a lengthy debate Monday night decided not to file an appeal, according to chair Jon Korta. Instead, the council will send letters expressing community concerns to the borough and Seavey.

“It was a hard thing. I think people were disappointed with the borough’s decision and feel there should be a place for the public to weigh in on this,” Korta said. “But they just recognized the reality of the situation and the ambiguity of the code as it’s written.”

The council will work with Mat-Su assembly member Tam Boeve to “tighten up” the code that applies to the balloon, he said. “At the time, no one foresaw this as a possible future use, probably.”