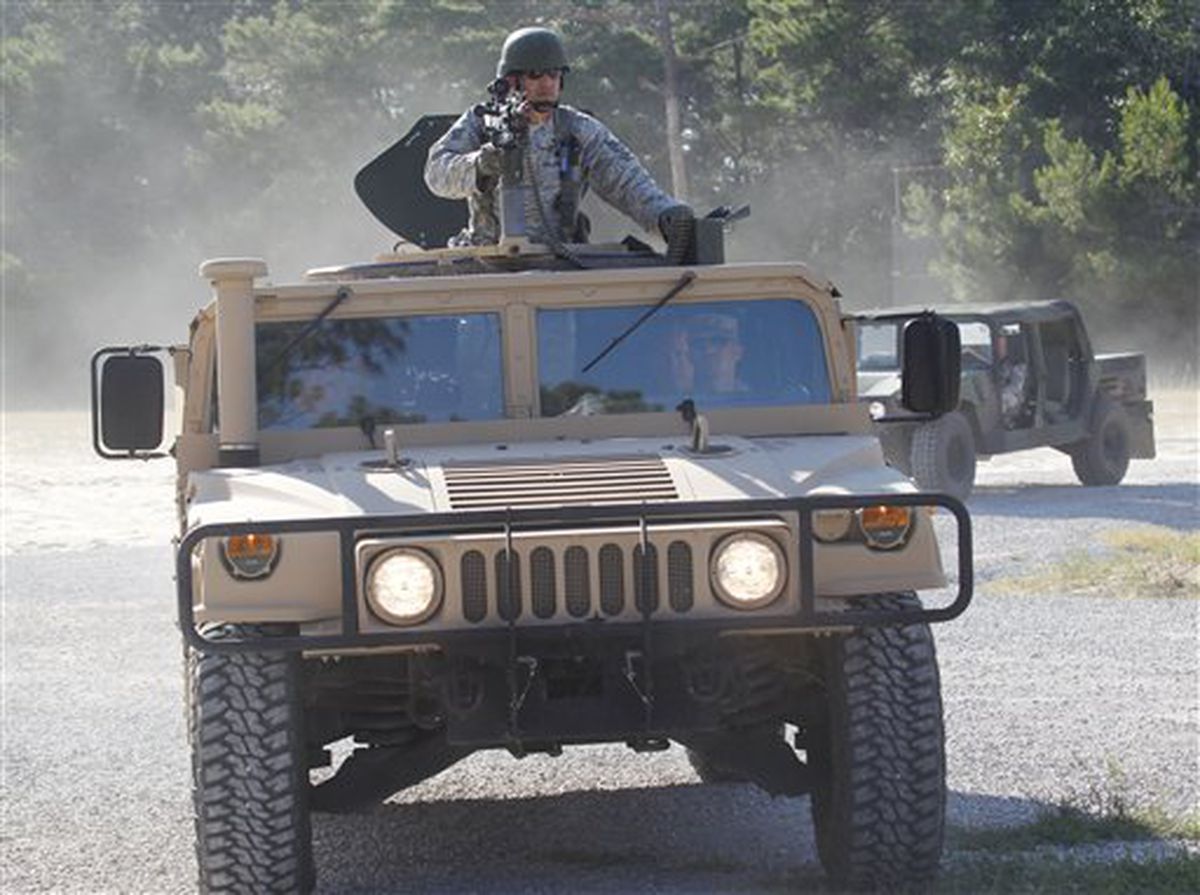 Members of the 96th Ground Combat Training Squadron in Humvees during a military demonstration at Eglin Air Force Base, Fla. (AP Photo/Wilfredo Lee/File)

Members of the 96th Ground Combat Training Squadron in Humvees during a military demonstration at Eglin Air Force Base, Fla. (AP Photo/Wilfredo Lee/File)

When Joshua Braica informed his family that he wanted to join the Marines after high school, his mother, Alexandrina, discouraged it. She and her husband had escaped Communist-era Romania in the 1980s and lived in a refugee camp before immigrating to the United States. “We don’t take our freedom for granted,” she said.

But she was concerned about the risks a military life would bring. So she urged Joshua to wait, and when he brought it up again, she asked him to pray, thinking he would conclude it wasn’t for him.

"He came back and he said, 'I prayed and I think I have a calling. I want to honor my country,' " she said.

In early April, Joshua, by then a 29-year-old Marine special operator whose wife had recently given birth to the couple's first child, died in an unexplained accident at Camp Pendleton, California, one of several military training fatalities that have not only shattered families but also focused attention on the dangers troops face far from the battlefield.

According to official statistics, training fatalities outnumbered combat deaths four to one in recent years as the pace of overseas counterterrorism operations has slowed. While Pentagon officials say training deaths are down overall, they acknowledge that at least 15 service members have been killed in military vehicle accidents this year, an increase from the previous year.

For Alexandrina Braica, a struggle to obtain clear information about what caused Joshua's death has compounded her grief as she awaits an official investigation.

"I keep thinking, is anyone taking seriously what happened to my son?" Braica asked. "Did anyone say, 'Okay, we had a fatality, let's ensure this doesn't happen again?' "

Those killed in recent vehicle accidents also include Marine 1st Lt. H. Conor McDowell, 24, who died in May in a rollover at Camp Pendleton, and Marine Lance Cpl. Hans Sandoval-Pereyra, 21, who died in Australia later the same month. In June, Army Spc. Marquise Elliott, 25, died in a Humvee accident in Alaska. On Aug. 15, an Indiana national guardsman, Staff Sgt. Andrew Michael St. John, 29, was killed in a Humvee rollover at Fort Hood, Texas.

Now the families of those killed are pushing the Pentagon to more closely examine the incidents and prioritize improving training standards to prevent future deaths. Lawmakers - including two Maryland Democrats, Sen. Ben Cardin and Rep. Elijah Cummings, chairman of the House Oversight Committee - have also urged senior military leaders to investigate and petitioned a government watchdog to conduct an independent analysis.

The Government Accountability Office is expected to study the issue.

Military officials say they are looking into the incidents, but they do not appear to be considering any sweeping changes, pointing to what they say is a slight improvement in training safety despite what officials characterize as a "spike" in vehicle-related deaths.

The Pentagon instead is taking a series of modest, mostly bureaucratic steps that include improving how it tracks training fatalities, which are reported differently across the military services. Officials acknowledge that the inconsistencies make it difficult to detect and fix systemic issues that may contribute to deaths.

The military "continues to work hard to standardize data to improve analytical efficiencies," said a senior defense official, speaking on the condition of anonymity because she was not authorized to address the issue publicly.

Pentagon officials say they have put in place technical solutions intended to improve training safety, including the installation of ground collision avoidance systems they say have prevented at least seven incidents related to F-16 aircraft.

To address vehicle accidents, the Army has mandated anti-lock brakes and an electronic stability system associated with reduced rollover risk for new and recapitalized Humvees. The systems, which became mandatory for new U.S. cars in 2011, have been installed in only about 3,200 of the Army's fleet of more than 100,000 Humvees.

The Pentagon has long had issues with tactical vehicles, including the Humvee. Early in the Iraq War, grappling with a surge in Humvee-related deaths, the military developed a simulator that trained troops in climbing out of flipped vehicles.

Army officials hope to install the system in more Humvees even as they, along with the Marine Corps, transition to the Joint Light Tactical Vehicle. A Pentagon report last year raised safety concerns about that vehicle, too.

Pentagon officials describe a balance between helping troops prepare for the dangers of combat while protecting lives in the process.

"Because core [military] activities are inherently risky, the department has embedded risk minimization and safety in their training missions," the official said.

For families of service members like McDowell, such changes would come too late.

On the morning of May 9, the younger McDowell, a Citadel graduate who grew up in the nation's capitol idolizing the Marine Corps, was leading a group of Marines advancing light armored vehicles (LAVs) slowly across a California training range largely obscured by tall grass and weeds.

Despite the Marines' caution, the vehicle in which McDowell was traveling suddenly tipped forward into a deep ravine. From the LAV's turret, McDowell was able to push his gunner down to safety. But McDowell was killed instantly when the vehicle landed upside down, his father said.

Michael McDowell believes that the Marines failed to properly survey the range before sending vehicles out that day. Families of those killed are also questioning the maintenance of the vehicles, many of which had undergone years of heavy use overseas, and whether pre-exercise training was adequate.

Six months before he was killed, McDowell wrote in his journal about an earlier LAV rollover: "This isn't the end of the world but we got really lucky. . . . This is a reminder that at any moment, through careless action, even in training, Marines can die."

At the time of his accident, McDowell was preparing to propose to Bourque. Following his death, she has moved in with McDowell's parents and thrown herself into pushing the Pentagon for action on training safety.

"Conor and I made each other promise that we would fight for each other to the bitter end, and that's not going to stop for me," she said in an interview.

Michael McDowell said the nature of his son's death made it harder to accept his loss.

"If he had died in a firefight, I would have been proud, but I would have said that is what he signed up for," he said. "I am still very proud of Conor, but he didn't sign up to die in a preventable accident."

The McDowell family has been able to obtain a clearer picture of what occurred in their loved one's accident than other grieving families. Rebecca Maye Purvis said her family has received little information about the Humvee mishap that killed her brother, Marquise Elliott, in June.

They haven't been able to identify or talk to the passenger in the vehicle, who she said has been reassigned to another unit. Some people in Elliott's unit said he hit his head in the accident; some said he hit his chest.

She described her brother as family-oriented, an "innocent soul" who had joined the Army hoping to work with military dogs but ended up in an artillery unit.

An Army reservist herself, Purvis was dismayed to learn that, in keeping with Army regulations, her family would need to submit a Freedom of Information Act request to obtain the full results of a safety investigation into Elliott's death.

Gary Sandoval's son Hans died after his vehicle rolled over during a training event in a remote area of northern Australia in May.

When Hans Sandoval-Pereyra enlisted in the Marines after high school, he told relatives he intended to make a lifelong career of serving the homeland he adopted when his family emigrated from Bolivia. The elder Sandoval offered support but cautioned: "Be careful."

When Gary Sandoval learned about the accident, he rushed to arrange travel to Australia. His son was still alive, receiving treatment in a hospital in Darwin, but later died of his wounds.

Now, heartbroken, Sandoval has decided to leave the nation in whose name his son died.

The Washington Post’s Julie Tate contributed to this report.