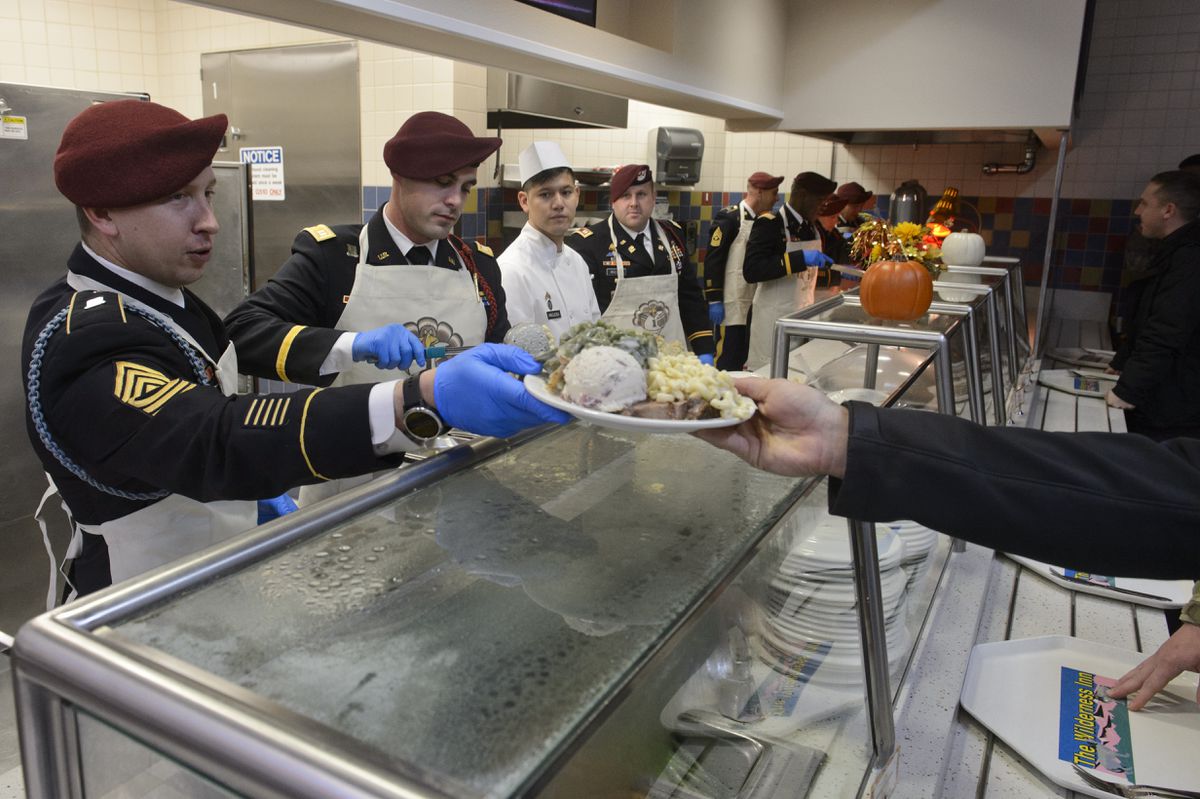 First Sgt. George Harrison hands a full plate to a soldier on Wednesday Army leadership at Joint Base Elmendorf-Richardson donned aprons to serve a Thanksgiving meal to hundreds of soldiers at the Wilderness Dining Facility. (Marc Lester / ADN)

First Sgt. George Harrison hands a full plate to a soldier on Wednesday Army leadership at Joint Base Elmendorf-Richardson donned aprons to serve a Thanksgiving meal to hundreds of soldiers at the Wilderness Dining Facility. (Marc Lester / ADN)

According to Sgt. Karl Schenk, Thanksgiving is always the best meal of the year at Joint Base Elmendorf-Richardson.

“The most generous portions and everything is fresh,” Schenk said, eating from a heaping plate of turkey, stuffing and green bean casserole at JBER’s Wilderness Inn dining facility.

On Wednesday, soldiers, their family members and JBER civilian employees shared a pre-Thanksgiving lunch. In Army tradition, the meal was served by officers and senior enlisted soldiers who took the opportunity to show their appreciation for junior soldiers who make up the heart of the military.

The early Thanksgiving meal was a moment for soldiers who were far from their homes and families to come together, said Lt. Col. Joshua Gaspard, the commander of 1st Squadron - Airborne, 40th Cavalry Regiment.

Around 800 to 1,000 hungry service members were expected to file through the dining facility. All of the typical Thanksgiving staples — like turkey, corn and pumpkin pie — were available to the soldiers.

Pvts. Amber Lewis, Jayla Selvey and Youngeun Oh were some of the first paratroopers through the long lines for lunch. Recently stationed at JBER, the three paratroopers had only been in Alaska a week.

Lewis said Thanksgiving away from her family in Georgia wasn’t going to be too difficult because she could talk to them on the phone.

Despite being away from family for the holiday, Lewis, Selvey and Oh were excited to begin exploring Alaska, whether by learning to ski and snowboard or trying out some local hikes.

Gaspard, in glossy boots and an apron, was one of JBER’s senior leaders serving lunch to soldiers in his command. The lieutenant colonel wouldn’t eat until his soldiers had been through the line.