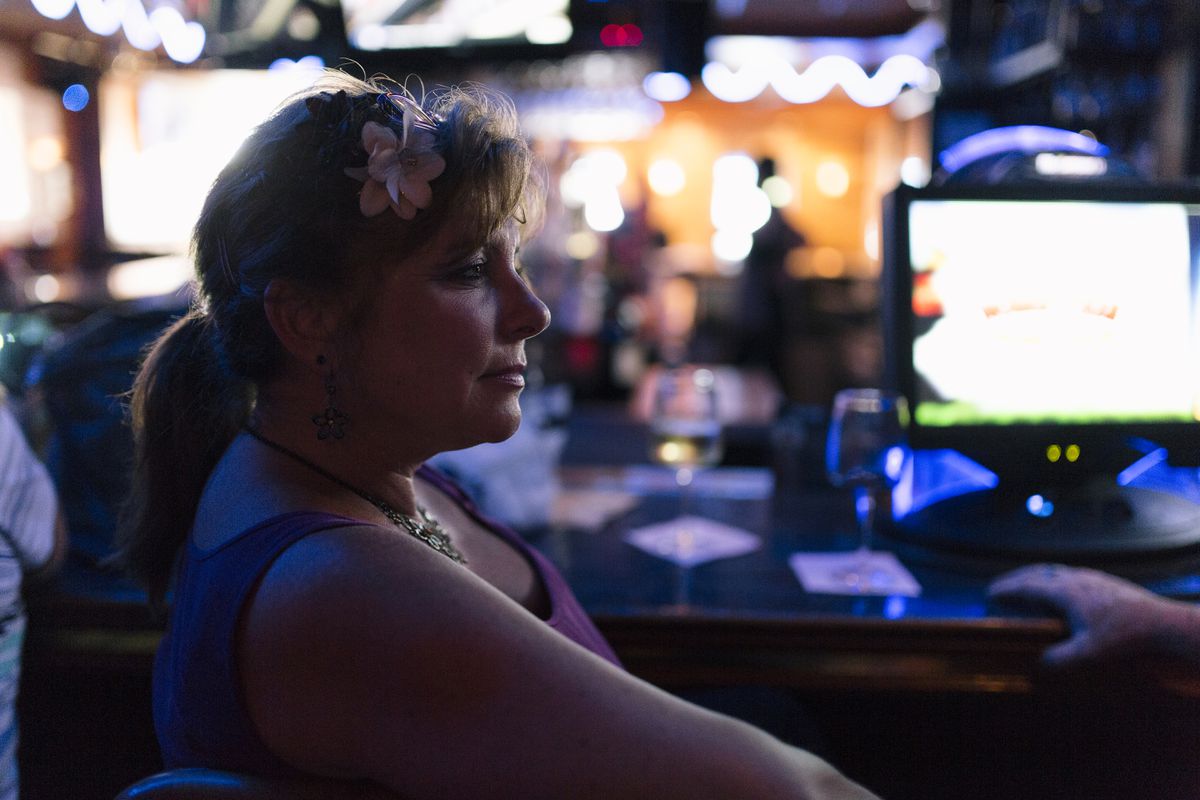 Denys Vezinau, 49, photographed at Wave’s bar and restaurant in St. Clair Shores, Mich., said Donald Trump makes her nervous but that she is leaning toward him because she wants a change. Photo for The Washington Post by Nick Hagen.

Denys Vezinau, 49, photographed at Wave’s bar and restaurant in St. Clair Shores, Mich., said Donald Trump makes her nervous but that she is leaning toward him because she wants a change. Photo for The Washington Post by Nick Hagen.

ST. CLAIR SHORES, Mich. – Hillary Clinton's campaign strategists look at the general-election map and see a bounty of electoral college votes that are hers for the taking: in Florida and Virginia, Colorado and Nevada – all places where Donald Trump has badly damaged his standing with nonwhites and women.

Yet as Clinton plots her march to the White House, there are warning signs elsewhere – in states where her campaign is not yet making a full investment. And that has sparked concern from allies who say Trump must not be underestimated.

In Michigan, Pennsylvania and, to a lesser extent, Wisconsin, an affinity for Trump's message of economic populism and nationalism has surprised many Democrats. These are big, industrial states they have carried for the past three decades – and where Clinton, so far, has not fully focused.

Listen to the happy-hour conversation around the bar at Wave's in this politically up-for-grabs suburb of Detroit, or to young parents taking their children for a stroll along the lakefront, or to factory workers picking up a 12-pack of Budweiser at the liquor store, and you hear danger for Clinton. Particularly striking is how many voters have reservations about Trump – yet are still thinking of giving him their vote.

"Trump is just insane," said Joe Place, 57, a retired autoworker who is undecided. "I vote Democrat, but I can't vote for Hillary. . . . I think she's beholden to interests other than mine or the middle class."

Four years ago, residents of St. Clair Shores narrowly voted to reelect President Barack Obama. Now, people here want change. In the primaries, they went decisively for Trump and Sen. Bernie Sanders of Vermont. And in conversations last week, they espoused many of the same sentiments as British voters who defied their country's political and business leaders Thursday by choosing to exit the European Union.

People here said they feel left behind in the economy and wronged by politicians. They are anxious about immigration and terrorism. They see corporations rebounding from the recession, but they wonder why their families aren't better off. They villainize globalization, fear losing their national identity and distrust elites and institutions.

These attitudes are shaping a rollicking presidential campaign defined by two historically unpopular nominees. "We just have garbage candidates," said Joe Fish, 33. Or, as 18-year-old Julie Downey put it, picking between Clinton and Trump "is like finding the shiniest turd."

With a flashy real estate mogul for an opponent, whose incendiary rhetoric and divisive policies have turned off huge swaths of the country's electorate, Clinton has been given a seemingly enormous opportunity. Yet she carries her own burdens – primarily that the public does not trust her, according to many polls. And as a Washington fixture for a quarter-century, she is struggling to credibly present herself as a change agent.

"Trump kind of scares you, like he might do something goofy, something bad," said Scott Vezinau, 51, the owner of Wave's.

"Like push the red button when he doesn't know what he's doing," his wife, Denys, 49, a waitress here, chimed in.

"But I'm for change," Scott said. "We're looking for something different."

Denys explained: "We've been born and raised Democrat. My father worked at Chrysler, his father for General Motors. We voted for Obama. But we're leaning towards Trump. Where else do you go?"

If Clinton is not the answer for the Vezinaus and voters like them across Michigan, as well as in Pennsylvania and Wisconsin, her campaign may be miscalculating where she should invest.

Clinton's campaign is advertising heavily in eight swing states with soft-focus spots designed to rehabilitate her image. This trio of Rust Belt states are not on the list, despite its organizing presence on the ground here, raising concerns among allies who fret that she cannot afford to take any of them for granted.

"I have been stunned at the number of sane people who have said they know what Donald Trump is, they know what he stands for, but they want to shake up the system," said Rep. Debbie Dingell, D-Mich., a Clinton backer.

Reflecting on the Brexit vote, Dingell added: "It's a forewarning of how people are fed up. I listen and hear them every day. And it's why I am worried and why I am paying attention."

Clinton aides said their candidate is attuned to these anxieties. She gave back-to-back economic speeches last week – the first painting Trump as unfit to steer the nation's economy and the second detailing her policy prescriptions.

"Far from underestimating what's happening out there, Secretary Clinton is seeing it and feeling it every day with her engagement with the American people," Jake Sullivan, Clinton's top policy adviser, told reporters on Friday, hours after the Brexit vote. "She will be offering specific solutions, not slogans, not anger."

The key for Clinton in the Rust Belt, her allies say, is to discredit Trump and to demonstrate that she has concrete proposals to better their lives – all while connecting emotionally with people's anger.

"There's no doubt that workers in Michigan feel the impact of manufacturing job loss," former Michigan Democratic governor Jennifer Granholm said. "There's also no doubt that Trump's words about trade resonate. But besides his words, what else is there?"

Clinton's advisers think Sanders could help Clinton with rural whites, young people and other groups that backed him in the primaries, though he has refused so far to suspend his campaign.

In the Michigan primary, Sanders hammered Clinton for her past support of "disastrous trade deals" – a salient issue here that helped propel him to an upset win. "The secretary was a little bit flat-footed," Sanders campaign manager Jeff Weaver said of Clinton.

Since then, Trump has been making the same argument, but Clinton has been vowing to "say no to bad trade deals," including the pending Trans-Pacific Partnership.

Republicans boast that Trump is awakening "Reagan Democrats" – whites who crossed over for Ronald Reagan in the 1980s but now vote only irregularly. However, many Reagan Democrats by now are either dead or have become reliable Republicans.

"The map is problematic for any Republican going into this election. It's even worse – substantially worse – for Donald Trump," Democratic pollster Mark Mellman said, citing Trump's low favorability ratings. "Obviously he's looking at fantasy land if he thinks he can put places like California and Michigan into play."

This thinking explains why Clinton is not on the air in Michigan, Pennsylvania or Wisconsin, at least as of now. Clinton spokeswoman Lily Adams said, "We'll continue to monitor states throughout the general election" to consider changes in future ad buys. By comparison, Trump is not airing any ads, meaning Clinton has no pressure to match him.

Of the three states, Pennsylvania appears the most competitive; a Quinnipiac University poll last week showed a virtual tie. Priorities USA, a pro-Clinton super PAC, announced Friday it would purchase $10.5 million worth of ad time in Pennsylvania between July and November.

Clinton aides express a steely confidence about all three states. They think the Democratic National Convention in Philadelphia next month will generate positive attention across Pennsylvania. In Michigan, they are doubtful that Trump could outperform Mitt Romney, who was born here and whose father was a popular governor; Romney lost to Obama by nearly 10 percentage points in 2012. And in Wisconsin, Clinton allies are heartened by the reservations many prominent conservatives there have voiced about Trump.

On the ground, Clinton's campaign has been working with the Democratic Party to deploy scores of staffers – though they are getting a later start than in higher-priority states such as Ohio.

In Pennsylvania, which also has a competitive Senate race, the Democratic Party said it has a field staff of more than 100. In addition, outside groups are spending millions of dollars to augment the party's voter registration, persuasion and turnout activities.

"You take what the Clinton campaign is doing, you layer that on top what labor is doing, then you take these affiliated groups, and you compare it to the other side of the ledger – which for all intents and purposes is a goose egg – and that lays a foundation for a very positive outcome," said T.J. Rooney, a former Pennsylvania Democratic Party chairman.

Trump's campaign is so underfunded that it has outsourced its ground game to the Republican National Committee, which said it has 54 staffers in Pennsylvania and 34 in Michigan. "Winning these two states would definitely put us on the path to 270 electoral votes," said Jon Black, the RNC's director of turnout and targeting.

In both states, organized labor is critical for Democrats. The biggest unions are endorsing Clinton, but some Democratic officials said they are nervous that private polling of the memberships of some Michigan unions shows up to one-half preferring Trump.

A closed-door strategy meeting this spring of Clinton campaign chairman John Podesta, campaign manager Robby Mook and Michigan's Democratic congressional delegation grew somewhat tense when lawmakers challenged the aides on their commitment to the state, according to three people with knowledge of the session.

The aides acknowledged that Clinton got out-hustled in the primary and said they would be focused on trade as a hot issue, though offered no specific plan to woo working-class white men from Trump, according to the sources, who spoke on the condition of anonymity because the meeting was private. Still, the lawmakers and campaign aides left in general agreement about Clinton's strategy for the fall.

Clinton led Trump 43 percent to 39 percent in the most recent Michigan poll, a May survey by the Detroit News. Democratic strategists think Clinton's huge advantage among black voters in Detroit, coupled with the opposition to Trump from some mainstream Republicans, will prove difficult for Trump to overcome.

But Ronna Romney McDaniel, the state Republican Party chair, thinks otherwise. She recalled seeing a few thousand people at Trump's first Michigan rally, last August in Birch Run, and realizing that he could turn her state red for the first time since 1988.

"I remember thinking, this is not a typical Republican audience," she said. "There are people here who are coming out for Donald Trump that I have never seen at a Republican rally before in our state. They were union Democrat voters. . . . and they believe that he is going to be a champion for them in the White House."

Brandon Dillon, chairman of Michigan's Democratic Party, acknowledged the threat but said Clinton is responding by building out a team led by Walt Herzig, a well-respected operative here.

"They know that a Democrat can't win the presidency without Michigan," Dillon said.