The painstaking work of translating Alaska's ballot into Native languages 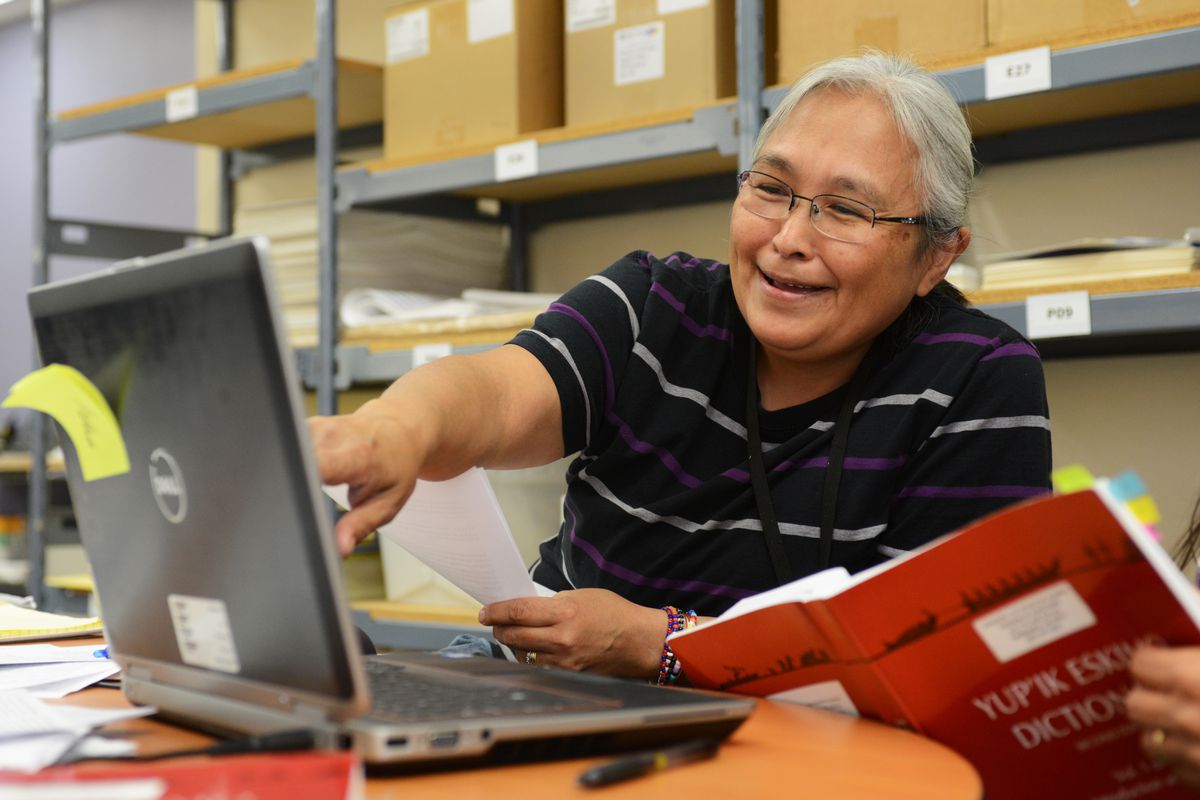 Lorina Warren helps fine-tune a Yup’ik translation of the voter pamphlet for the Yup’ik and Cup’ik spoken in Hooper Bay and Chevak on Wednesday afternoon, Aug. 31, 2016, at the Division of Elections in Midtown. Warren is one of nine translators serving on the Yup’ik panel. (Erik Hill / Alaska Dispatch News)

Lorina Warren helps fine-tune a Yup’ik translation of the voter pamphlet for the Yup’ik and Cup’ik spoken in Hooper Bay and Chevak on Wednesday afternoon, Aug. 31, 2016, at the Division of Elections in Midtown. Warren is one of nine translators serving on the Yup’ik panel. (Erik Hill / Alaska Dispatch News)

After hours in the state elections office in Midtown Anchorage last month, two women stared at a computer screen, murmuring words in Yup'ik.

They were struggling over the translation for the phrase "risk-adjusted return." One of the women, Lorina Warren, looked across the table at Indra Arriaga, language assistance compliance manager for the Division of Elections.

"Tell me in simple English what this sentence means," Warren said — an oft-repeated phrase among groups of people working to translate state election materials into seven Yup'ik dialects and the Interior language of Gwich'in by the November election.

Nearly a decade after the Native American Rights Fund and the American Civil Liberties Union sued the state over its failure to provide ballot materials in Yup'ik, the painstaking work of helping Alaska Native voters understand what they're voting on has become an expansive undertaking, one that involves deciphering complex financial concepts to faxing handwritten notes between Anchorage, Fairbanks and remote villages.

Those involved say it's challenging but also deeply rewarding.

"Lots of work," said Lorina Warren, a fluent Cup'ik speaker from the village of Chevak who works as a special education teacher at the Alaska Native Cultural Charter School and serves on the Yup'ik language panel.

The state first started translating ballot materials into Yup'ik about a year after the 2007 lawsuit. In 2013, a second suit was filed, asserting that the elections officials had not done enough to expand the reach of the program outside of Bethel.

In a settlement in the second case, announced last September, the state agreed to expand language assistance — including translations and audio aids — with a focus on 29 communities.

Natalie Landreth, the lead attorney for the Native American Rights Fund in both lawsuits, said she's seen a dramatic transformation in the state's level of commitment.

"The division (of elections) has just made improvements in leaps and bounds in terms of the translation and materials available," Landreth said.

State elections director Josie Bahnke, who was hired in October, said meeting the terms of the most recent settlement has been her top priority. By January, the state had hired Indra Arriaga as the first full-time language compliance manager to coordinate the panels of Native speakers. The creation of Arriaga's position was one of the conditions of the lawsuit settlement.

The first meetings of the panel took place over two stretches in March and April, with a second round in May and early June. Eight people served on the Yup'ik panel and five on the Gwich'in panel.

Much of the work had to happen before the start of the summer fishing season. Many panelists traveled to Anchorage and Fairbanks from villages that still survive largely on subsistence.

On the Yup'ik panel, a pattern developed. Central Yup'ik speakers would come up with the translation first. Then the panelists from the other regions reviewed the translations and whether they made sense.

In the glossary, posted on the state elections website, some definitions are understood by all regions. Others are broken out by dialect.

Arriaga is a native Spanish speaker. She did not know either Yup'ik or Gwich'in, but had worked as a research analyst with the state community of regional affairs. She's since picked up a variety of terms and ideas, like how "Alaska nahkat" refers to Alaska as a geographic state, but "gwich'in," with a lowercase "g," refers to the people who live in the state.

But explaining English terms and concepts is a big part of Arriaga's job. She worked in investment banking for five years in San Francisco, which turned into an unexpectedly helpful pool of knowledge, particularly as she's helped translators on a ballot measure that would tie voter registration to the Permanent Fund dividend.

When Warren, working on the translation from Central Yup'ik to the Hooper Bay-Chevak dialect, asked for an explanation of a "risk-adjusted return," Arriaga explained by pointing at plastic bins filled with office supplies. The term refers to measuring the risk for producing a return on investment.

Warren also pondered the best translation for "investment portfolio." The Yup'ik word on the computer meant "where we can meet," she said. Arriaga said the word should instead refer to a collection of things.

Much of the Gwich'in translation work has been done without computers or internet. Arriaga has been mailing panel members English phrases.

The Gwich'in panel members hand-write the translations, then the handwritten translations are faxed back to Anchorage. Arriaga has received 20-page faxes of handwritten notes, she said.

Arriaga then types up the notes. Sometimes she can't read the writing, or the fax is grainy.

The typed version goes to another panel member who checks the accuracy of Arriaga's transcription, and of the translation itself. A third person later does final edits on a computer.

Allan Hayton, who grew up in the Gwich'in village of Arctic Village, has lately been one of the computer editors. He said the translation work should have happened decades ago. But he's glad it's being done now.

"I think it's a support for a language that's endangered," Hayton said. About 300 people speak Gwich'in today, he said.

Gwich'in has a long history of literacy and translation, including of the Bible and hymns from the Anglican Church, Hayton said. He himself helped create a translation of Shakespeare's "King Lear" in 2013.

He now works for the Doyon Foundation in Fairbanks. Earlier this month, the foundation announced it had received a $900,000 grant to work on preserving regional languages that are in danger of extinction.

Caroline Tritt-Frank of Arctic Village, a member of the Gwich'in panel, said she now has a much better understanding of how the court system works. But she's puzzled over the best way to explain that a Superior Court judge has more authority than a District Court judge.

"The elders are starting to understand more of what the government process is, and it makes more sense to them," Tritt-Frank said.

Computers have played a larger role in the Yup'ik panel work. Three of the panel members live in Anchorage.

The expanded glossaries, containing twice as many terms as the previous Yup'ik glossary, debuted along with audio materials in the August primary. Arriaga accompanied Lt. Gov. Byron Mallott, the elected official in charge of elections, to four villages in Western Alaska to observe. She watched poll workers hand out "I Voted" stickers in Yup'ik and Gwich'in.

She said the state still needs to improve training for poll workers to make sure the materials are being used, but she called the primary "encouraging."

Since the most recent settlement, the state has spent $220,000 expanding language access, Bahnke said. There's still a lot of work left before the November election. Panelists are working to translate the election guide and candidate statements and record audio aids, a more complicated task than the August primary ballot.

Not everything is being translated. There won't be time to work through the actual text of the laws, Arriaga said.

Next year, the panels will work to expand the glossaries to define financial and legal terms, Arriaga said. The state will also begin to translate materials into the northern Alaska language of Inupiaq, though that wasn't part of the settlement.

"We're not done at all," Arriaga said.