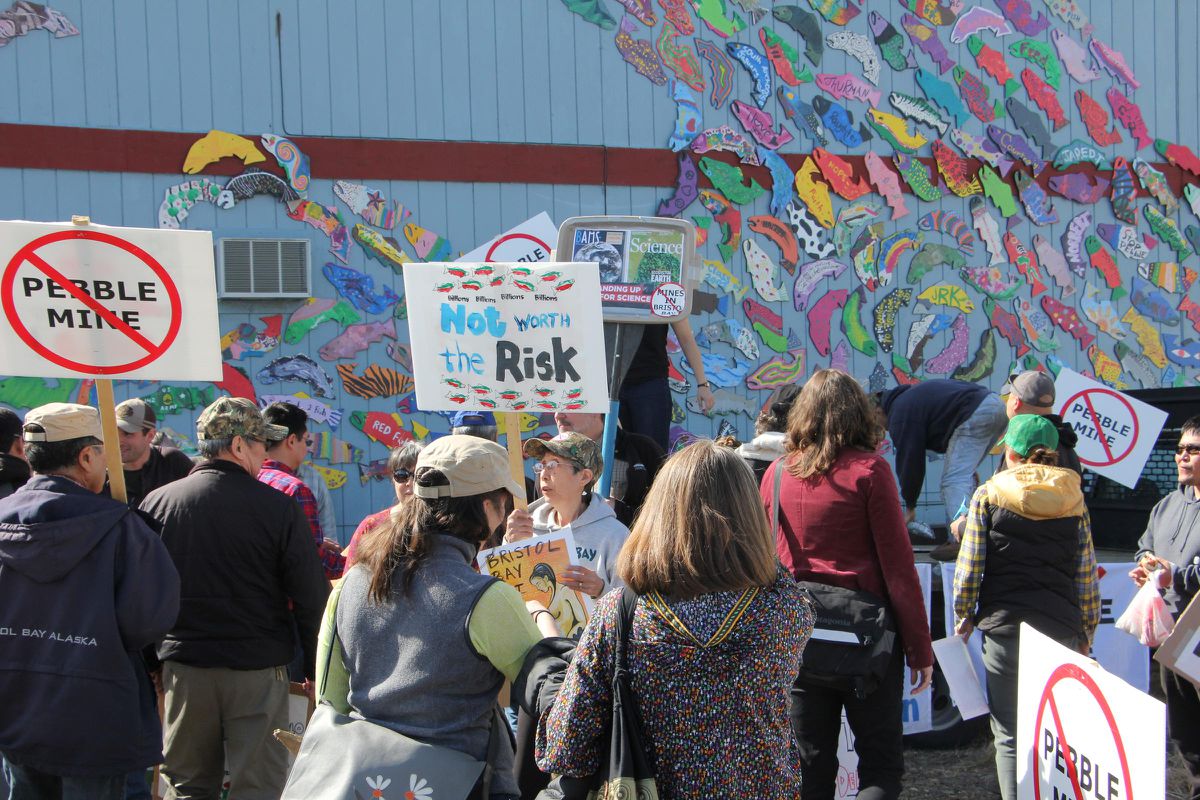 In May, Pebble mine opponents held a rally and press conference in Dillingham, just ahead of an EPA announcement that it would reverse course on pre-emptive restrictions proposed during the Obama administration. (KDLG photo)

In May, Pebble mine opponents held a rally and press conference in Dillingham, just ahead of an EPA announcement that it would reverse course on pre-emptive restrictions proposed during the Obama administration. (KDLG photo)

DILLINGHAM — Pebble Limited Partnership is expected Thursday to publicly unveil the outline for a plan to mine the copper and gold deposit northwest of Iliamna.

The company's plans, say those who have been briefed, call for a much smaller mine than discussed before, and appear to address many of the concerns raised by Bristol Bay residents and fishermen, environmentalists and the U.S. Environmental Protection Agency.

Residents of the Bristol Bay watershed have largely opposed Pebble, perhaps in increasing numbers, for the past decade. Much of the effort focused on pushing President Obama's EPA to finalize preemptive Section 404(c) Clean Water Act restrictions that would have blocked permitting of Pebble mine's dredge and fill activities.

Pebble filed several lawsuits, alleging in one that the EPA and mine opponents were colluding to reach a predetermined outcome. That lawsuit found traction in the court of U.S. District Judge H. Russel Holland, who agreed to an injunction against further EPA effort until the case was resolved.

President Trump's EPA agreed to settle the lawsuit with Pebble, allowing the company to enter into a normal permitting process as defined by the National Environmental Policy Act. A caveat was added that the company must file for permits within 30 months.

Ahead of CEO Tom Collier's presentation of Pebble's plans to the Resource Development Council in Anchorage on Thursday morning, the company has been briefing some stakeholders.

Nathan Hill, the manager of the Lake and Peninsula Borough, has seen the 150-plus-slide PowerPoint presentation with the company's estimates about the size and scope of the project, and what it would mean for nearby communities.

The Pebble deposit sits within the borough's boundaries.

"The position of the borough is neutral," he said. "We are tasked with approving permits regarding any development in the borough, so for us to have anything but a neutral stance would not make our permitting process a fair one."

The borough Hill manages stands to gain or lose more than anywhere else in Bristol Bay from the mine. The borough pulls in roughly $1.5 million in taxes from the commercial sockeye harvest each year, a revenue stream that depends on a healthy fishery. But the borough will also have some taxing authority over the Pebble project, if it's developed, that could reap millions annually.

Pebble might create jobs and contracts for village corporations, but there will inevitably be disruption in people's way of life and potential for a wide range of environmental risk to borough communities. Amid a tense dialogue, Hill said, his assembly and mayor have tasked him to meet with Pebble as needed.

"To ignore facts and reality doesn't do anything to satisfy that," he said. "In my opinion, if you want to have good information, you need to be open to that information. That's what I'm trying to do, keep apprised of all arguments and all information, and make myself available to do the job of borough manager."

In the past, the Lake and Peninsula Borough has been targeted by Pebble mine opponents, notably one of Alaska's wealthiest residents, Bob Gillam, who funded ballot initiatives and lawsuits. The borough has spent hundreds of thousands of dollars fighting what it claims are frivolous lawsuits.

Downstream from Pebble's deposit, down the Koktuli to the Mulchatna to the world-famous king salmon-producing Nushagak River sits Dillingham, the largest hub in Bristol Bay and center of the region's loudest opposition to Pebble.

A lifelong commercial fisherman, Samuelsen is a chief with the Curyung Tribal Council, a director with the Bristol Bay Native Corp. and chairman of the Bristol Bay Economic Development Corp. board of directors.

"Not having seen the plan, I will still oppose the mine. It has many ramifications that could affect the commercial fishery, sport fishery and subsistence fishery out here," he said.

Samuelsen said others who answer to him have seen Pebble's plans, and he is concerned to hear that the company may focus on the Pebble West deposit that drains to the Koktuli River. But he is willing to take a look at what the company is proposing.

"I think there's room for us to invite them — they don't have to invite us, we'll invite them — to look at what they're planning on doing. It isn't just a 'hell no,' we're monitoring the situation, and I believe that the super-majority of Bristol Bay is going to continue to oppose that mine," he said.

The United Tribes of Bristol Bay, a political advocacy group representing 14 tribal councils in the region, has taken a lead position in opposing Pebble. A UTBB contingent has traveled to nearly every village in the region to shore up support ahead of Pebble's rollout and an EPA visit, and protested outside the Pebble advisory committee's August meeting in Anchorage. They turned down an invite to join and even address that meeting, and Executive Director Alannah Hurley said they will continue to refuse discussions that presume a mine will be built, no matter the size.

"We have known from the very beginning of this threat exactly what is up there. We know from their own presentations to their shareholders and to the investment community exactly the type, size and location of the Pebble deposit. Those are things that cannot change," Hurley said. "The impact of that type of mining on our watershed has not changed. Nothing has changed when it comes to the Pebble Mine other than politics."

Hurley said the residents UTBB has heard from are deeply frustrated to still be talking about a mine they have opposed for a decade.

Pebble has a few supporters in the region who have mainly voiced the importance of the jobs and income that, especially around Iliamna Lake, other organizations have failed to create. Others are more open to seeing Pebble vetted normally, said Lisa Reimers. As CEO of the Iliamna Development Corp. and Iliamna Natives Ltd. board member, Reimers has worked with Pebble in the past and earned the ire of mining opponents for doing so. She hopes for an open, robust debate about what is at stake, but not does not believe her detractors will come to the table.

"To me, nothing has changed. If anything it's gotten worse with the protesting and animosity," Reimers said.

IDC and INL will take a hard look at Pebble's plans and see if it makes sense for the area, said Reimers, adding that Iliamna leadership has not taken a firm position on the project. This summer was a difficult one, she said, discussing how contract work with Pebble did not go smoothly, and adding that IDC shareholders and others in Iliamna were left wondering if this mining company can be trusted.

Reimers asked the Bristol Bay Native Corp. board to help produce non-Pebble-related work and contracts, if the board is to remain insistent against the mine. No other options were provided, she said.

The BBNC board of directors spearheaded an ugly fight against one of its own directors when she signed onto Pebble's advisory committee this spring. Kim Williams of Dillingham was first ousted from her role as director of Nunamta Aulukestai, then BBNC's board threatened a recall vote. Williams, one of the proposed mine's staunchest opponents, backed down and resigned from the Pebble advisory committee in June.

After that, her father, William Johnson, agreed to join, as did Alexanna Salmon from Igiugig. Salmon said the move probably cost her a few friendships.

She is opposed to the mine, as she believes most of her community is too, but she wants to be informed and perhaps affect outcomes from the inside.

"This Pebble project is located on state land that has been designated for mineral development, and I have no control over that property or its status besides being a single resident voter of this state," she said. "This is a project that is in our backyard, it will be life-transforming for our community, and if there's an opportunity to learn what they're planning, I want to be at that table. And it's not for me, it's for all of the future generations."

By late this week, stakeholders and the public should finally get a first glimpse of Pebble's mining plans and the company's estimated impacts on the local environment and economy. The rollout will start in Anchorage and Fairbanks, but Pebble said it will bring the conversation to the region in the months ahead.

This article originally appeared at KDLG.org and is republished here with permission.