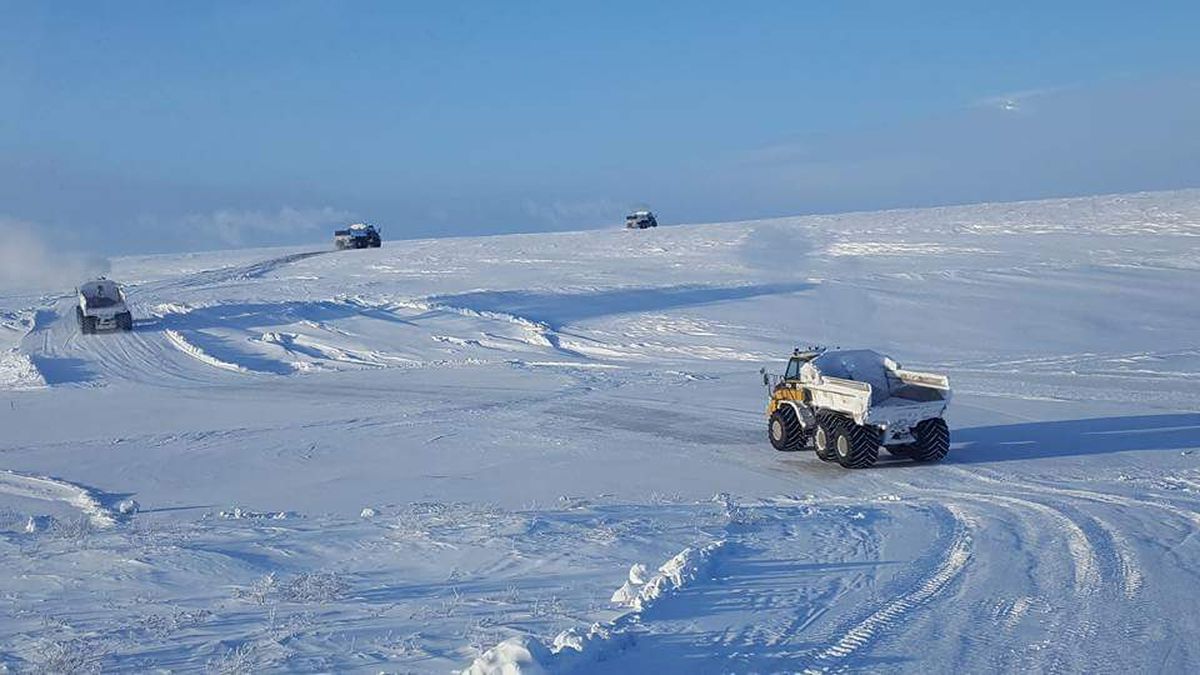 If you've ever wanted to drive on a snow road to the northernmost community in the United States, your time is coming.

The North Slope Borough, in an effort to lower the cost of living in the region, plans to build 300 miles of snow roads in the coming days so residents in two Arctic communities can drive their vehicles to the Alaska road system, a borough official said.

But the thoroughfare over the frozen tundra will also be open to road-trippers wanting to head north to visit Utqiagvik, the nation's farthest north city with 4,500 residents, or Atqasuk village, with about 200.

Using track-wheeled rigs and other equipment, the borough starting next week will pack and care for the snow roads. They'll link the communities to the North Slope oil fields that lead to the Dalton Highway and eventually Fairbanks and other cities, said Jason Bergerson, manager for the Community Winter Access Project.

The roads should be operational in about two weeks, or soon after, he said. They might last until early May, weather permitting.

Drivers will have to follow certain rules associated with state and federal permits the borough received last week for the first-time effort. The permits were awarded after minimum amounts of snow cover and frost depth were met, Bergerson said Thursday.

For one thing, travelers must join slow-moving convoys led by a borough pilot truck equipped with rubber paddle tracks instead of road tires. The trips will happen perhaps once a week from each direction.

"Our goal is to keep the caravans to 10 or 12 vehicles, something like you'd see through the Whittier Tunnel," Bergerson said, referring to the 2.5-mile escorted trip through a mountain near Anchorage.

The borough hopes to expand the frosty road network in future winters, linking additional villages such as Wainwright to the Alaska road system.

"It's about community economic development," Bergerson said. "It'll be an opportunity to bring goods and supplies in overland, and hopefully at a lower cost, instead of air-freighting or barging them in."

Four-wheel-drive or all-wheel-drive cars and trucks will be allowed, he said. The borough will inspect vehicles before they leave to make sure they're road-ready.

"Drivers must have valid licenses and proof of insurance — just like they would anywhere," Bergerson said.

Bergerson said the borough plans to document economic savings the roads might generate for North Slope villages. The communities are islands on the tundra, usually accessible only by planes or barges off the Arctic Ocean.

Air and barge shipping can cost 10 times more than bringing products overland, he said. "That's based on limited data, so part of what we want to document is can we do this, what is the cost, and how many people can make use of it?"

The permits allow residential, highway vehicles to legally use the roads under the borough's guidance, said Bergerson.

Contractors each winter already create large snow trails between Atqasuk, Utqiagvik and the oil fields, so trucks can deliver winter loads of gas and heating oil from the road system.

That trail will be the foundation for the borough's snow road. It will be lined with temporary markers, and snow fences to help keep drifts from piling up.

The current snow trails aren't regularly maintained, as the borough plans to do, said Shelly Jones, in charge of Arctic operations for the Bureau of Land Management, which awarded the federal permit.

In the past, travelers who tried driving highway vehicles on them sometimes got stuck. "The safety aspect is a nice thing about this," she said of the plan. "A lot of residents have bogged down, and had to abandon vehicles and extract them at a lot of cost. Hopefully they won't have the same issues anymore."

The federal agency, manager of the National Petroleum Reserve in Alaska where the two communities are located, will inspect the snow road. In summer, it will make sure the tundra isn't damaged, she said. Any evidence should vanish when the snow melts.

The route from Atqasuk will stretch 70 miles to Utqiagvik. It will travel another 235 miles to the oil field roads.

The pilot truck will move about 12 mph — driving the snow roads could take more than a day. There's another 500 highway miles between Fairbanks and Deadhorse, the oil field hub.

That's not too long, said Shirley Kagak, a borough employee in Atqasuk.

Residents in both communities will "save tons of money" if they don't have to fly in large items such as furniture, she said. She'll drive her truck to Fairbanks or Anchorage as part of the borough's motorcade, for big shopping trips.

She recently ordered a $3,000 furniture set from a company in Anchorage. Shipping it to Atqasuk entirely by plane would have cost another $4,000, she said.

But she hired a delivery company to haul it to the village after it was flown to Utqiagvik, slashing $1,000 off the shipping bill.

"This will definitely benefit our village and (Utqiagvik) as well," she said.

She'll also use the road to drive to the Alaska Commercial store in Utqiagvik. That will be better than the snowmachine trips she currently makes to buy fresh meat and produce not available in Atqasuk.

"It will be a lot warmer in the truck," she said.

Sherlene Oyagak, Atqasuk city clerk, said she won't drive the road. She fears getting her truck stuck in snow, not good when temperatures drop well below zero.

Bergerson said the borough will ensure safe travel. The convoys will be equipped with emergency gear such as locator beacons. Trailers will be staged along the route for hauling away disabled vehicles.

"The borough is taking responsibility for the status of the tundra, and making sure people traveling in that caravan get home safely," he said.