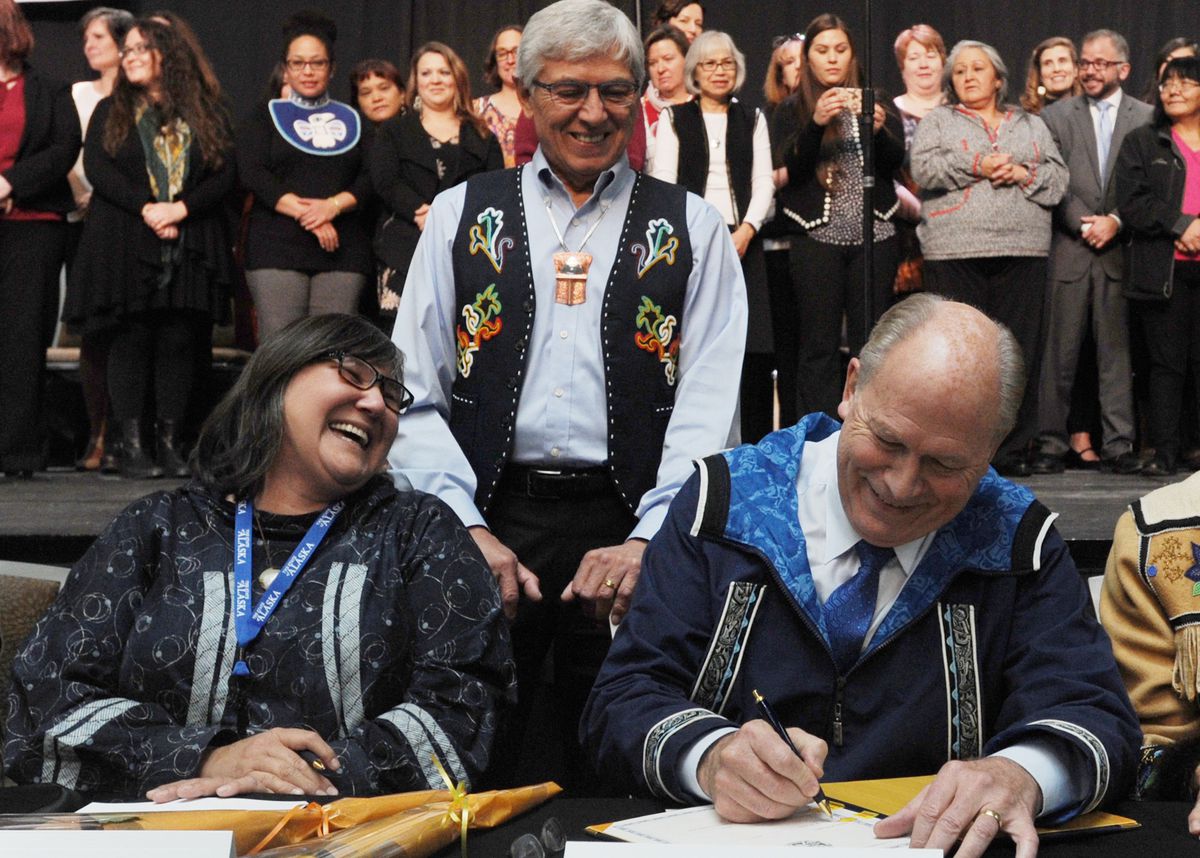 Now 51, the Yup'ik from Southwest Alaska was an 18-year-old college student when she made national headlines in 1985.

She silenced an Anchorage meeting of the Senate committee on Indian Affairs with her warning of rampant alcohol and drug abuse in villages that killed too many people, according to a news report from that year.

In more recent decades, Davidson has been on the front lines of battles to improve health care for Alaska Natives, including as Gov. Bill Walker's Health and Social Services commissioner until this week.

In a private ceremony on Tuesday, Walker swore Davidson in as lieutenant governor. She replaced Byron Mallott, who resigned from the post and stepped down from the Walker-Mallott re-election campaign, after Mallott made "inappropriate comments" to a woman.

The changes come as the Alaska Federation of Natives prepares to hold its annual convention starting Thursday. Davidson is planned as the keynote speaker, on Thursday morning at 9:20 a.m.

"Commissioner Davidson's work and contributions are themselves great examples of the kind of innovative thinking that inspired this year's convention theme — Innovation in the Past, Present and Future — and we all look forward to her insights," Kitka said.

Davidson could not be reached for comment for this article.

Before Walker appointed Davidson to his cabinet in 2014, she had worked at the Alaska Native Tribal Health Consortium for several years, leading the legal and intergovernmental affairs team.

She was a key figure in negotiations with the federal government that in 2012 allowed rural veterans to get care at tribal clinics in their communities.

Before that, she fought to put dental therapists in rural villages — despite legal challenges from dental associations — helping create the first mid-level dental program in the U.S.

The program improved villages' access to health care. Dental therapists, who can perform some of the same work as dentists, now treat tens of thousands of Alaskans.

Walker announced Davidson as his choice for Health commissioner shortly after taking office in 2014, saying she was the foremost expert on Medicaid expansion in Alaska.

She played a vital role in the governor's decision to expand Medicaid in 2015, arguing the move meant broader health-care services for Alaskans, including Alaska Natives.

Born in Bethel, Davidson also attended school in Aniak, a village in that region.

She used her personal experiences of limited access to dental and health care in those communities to fight for health care improvements, said Grace Jang, deputy chief of staff to Walker.