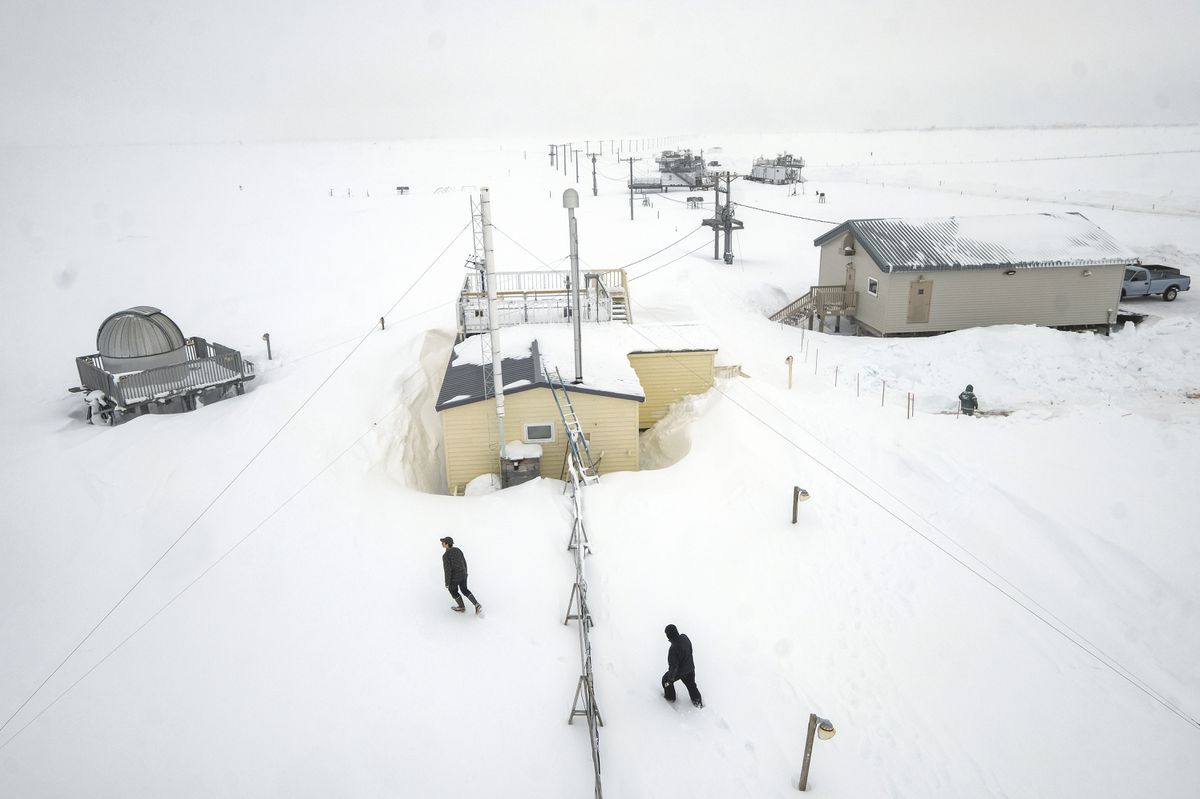 For four years, he has served as station chief of the Barrow Atmospheric Baseline Observatory, America's northernmost scientific outpost in its fastest-warming state. Each morning, after digging through snow to his office's front door, Thomas checks the preliminary number on the observatory's carbon dioxide monitor. On a recent Thursday it was almost 420 parts per million - nearly twice as high as the global preindustrial average.

It's just one number, he said. But there's no question in his mind about what it means.

Alaska is in the midst of one of the warmest springs the state has ever experienced - a transformation that has disrupted livelihoods and cost lives. The average temperature for March recorded at the NOAA observatory in Utquiagvik was 18.6 degrees Fahrenheit above normal. Fairbanks notched its first consecutive March days when the temperature never dropped below freezing. Ice roads built on frozen waterways - a vital means of transportation in the state - have become weak and unreliable. At least five people have died this spring after falling through ice that melted sooner than expected.

[March records for warm weather across Alaska were ‘obliterated’ this year]

"Climate change is happening faster than it's ever happened before in our record," Thomas said. "We're right in the middle of it."

Utqiagvik set daily temperature records on 28 of the first 100 days of this year, according to the Alaska Climate Research Center.

In early February, residents awoke to find that the land-fast ice that usually clings to their shore until summer had been swept out to sea by strong winds - a sign that the ice wasn't as thick or well-grounded as it used to be.

"It was like, 'Whoa, I've never seen that before,'" Thomas said.

"It was surprising in a human way," he added. "But not necessarily surprising in a science way." The Barrow observatory has been monitoring climate for more than 40 years. Thomas knows where the trends are headed.

Two hundred miles to the south, Marc Oggier, a graduate student at the University of Alaska Fairbanks, returned this month from conducting field work to find the city completely clear of snow. It was the shortest-lived snowpack in recent history.

Oggier wrinkled his nose at the vegetal, springlike scent in the air.

"It smells weird," he said. "It smells like rain."

This time of year, he explained, "you shouldn't be able to smell anything." The ground should still be frozen solid.

The historic warm temperatures this spring are linked to vanishing ice on the Bering and Chukchi seas. Both areas set records this year for their lowest amount of ice in March.

[Pace of change in the Bering Sea startles scientists]

Warm weather threatens subsistence whaling - a centuries-old tradition in and around Utqiagvik, said Kaare Erickson, the North Slope Science Liaison for the Ukpeaġvik Iñupiat Corp., which manages Inupiat land and provides services to the community. Though the sea ice near the city refroze after the February wind event, many are concerned about whether it can provide a stable platform from which to hunt.

On Shishmaref, the barrier island where he grew up, "it's an even heavier impact," Erickson said.

When ice forms later and melts earlier, it leaves coastlines vulnerable to erosion from fall and spring storms. The shoreline on Shishmaref has retreated more than 100 feet in Erickson’s lifetime, and the town has voted to relocate to a site farther from the sea. Residents who subsist on seal and walrus meat must navigate an increasingly unreliable ice pack as they search for food.

Unstable ice has already claimed lives. Two men died of exposure in late March when their vehicles fell through the frozen Kuskokwim River near Bethel, the Alaska State Troopers said.

This week, three family members - including an 11-year-old girl - were killed after crashing through ice on their way to the small village of Noatak, which can be reached only by snowmobile, boat or air.

Sgt. Teague Widmier, who leads the Alaska State Troopers unit in Bethel, said authorities have urged people to stay off the increasingly weak river ice. But he acknowledged that residents have few other options for traveling in rural parts of the state.

But this year it has come earlier than usual. Ice thickness this winter was below average on rivers across the state, according to the National Weather Service. On the Kuskokwim near Bethel, where the two men died in March, it was just 19 percent of normal. Many parts of the river are already ice-free - even though it usually remains frozen well into May.

All of this was on Bryan Thomas’ mind as he went about his Thursday morning routine at the Utqiagvik observatory.

The building is modest - just three small rooms and no bathroom ("We use a bucket," Thomas explained) - and crowded with devices. Air samplers take continuous measurements of every problematic molecule: carbon dioxide, methane, ozone-depleting chlorofluorocarbons. Meteorological instruments track the fluctuating weather. Computers communicate with nearly two dozen polar orbiting satellites, each of which can send down data as often as 14 times in a 24-hour period.

Each of these measurements helps explain the transformation occurring outside Thomas’ window.

"I think, OK, this [greenhouse gas measurement] is going to help people understand how much energy from the sun is being absorbed by the atmosphere," he said. "There's that visceral connection to what's happening."

His next task was clearing off the intake lines, tubes that pull gases from the atmosphere into the observatory's instruments. Donning insulated pants and a face mask, he trudged back outside to a rickety, 50-foot tower and began to climb. Strong winds rattled the metal and blew snow into his face; by the time he reached the top, the world below was lost in a swirl of white.

Thomas used a store-bought paintbrush to wipe ice from the instruments, making sure they continue to capture the changing climate for another day.