Toksook Bay elder is first person counted in 2020 US census 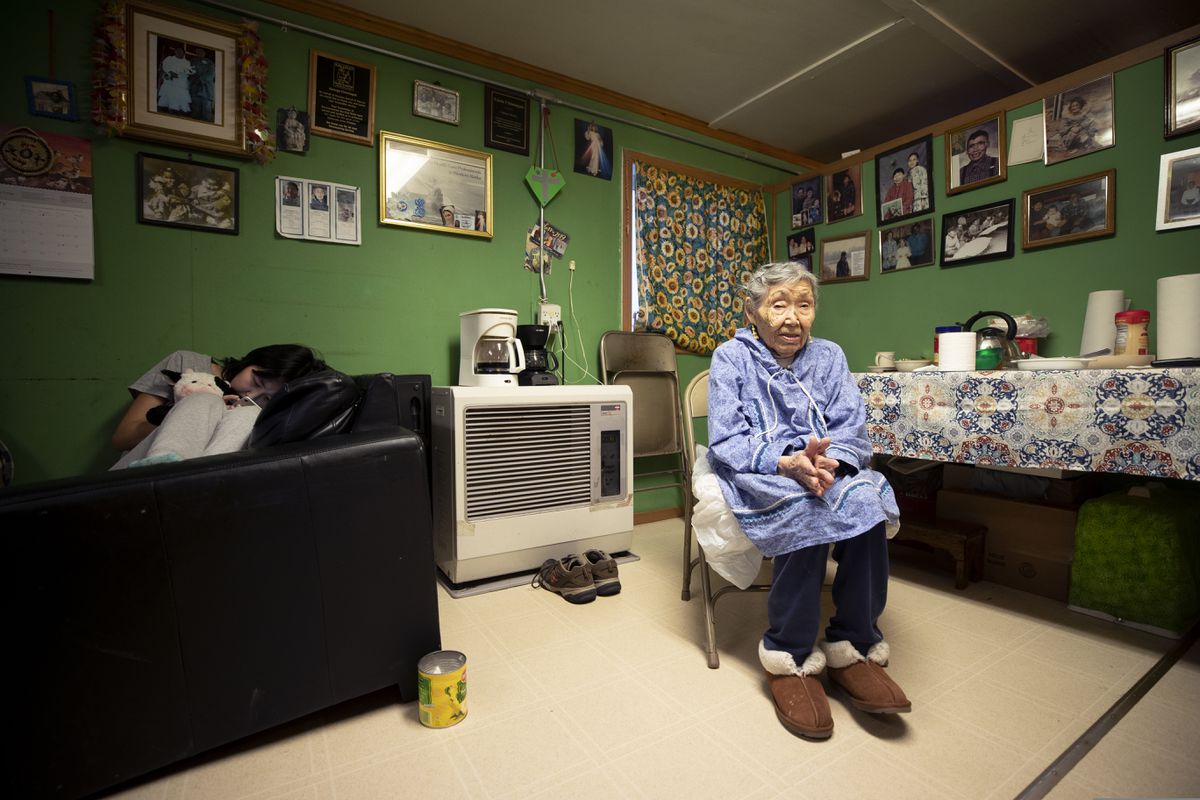 Lizzie Chimiugak on Monday at her home in Toksook Bay. Chimiugak, who turned 90 years old on Monday, is to be the first person counted in the 2020 U.S. census on Tuesday. (AP Photo/Gregory Bull)

Lizzie Chimiugak on Monday at her home in Toksook Bay. Chimiugak, who turned 90 years old on Monday, is to be the first person counted in the 2020 U.S. census on Tuesday. (AP Photo/Gregory Bull)

TOKSOOK BAY — Lizzie Chimiugak has lived for 90 years in windswept Western Alaska, born to a nomadic family who lived in mud homes and followed where the good hunting and fishing led.

Her home now is an outpost on the Bering Sea, Toksook Bay, and on Tuesday she became the first person counted in the U.S. Census, taken every 10 years to apportion representation in Congress and federal money.

"Elders that were before me, if they didn't die too early, I wouldn't have been the first person counted," Lizzie Chimiugak said, speaking Yup'ik language of Yugtun, with family members serving as interpreters. "Right now, they're considering me as an elder, and they're asking me questions I'm trying my best to give answers to, or to talk about what it means to be an elder."

The decennial U.S. census has started in rural Alaska, out of tradition and necessity, ever since the U.S. purchased the territory from Russia in 1867. The ground is still frozen, which allows easier access before the spring melt makes many areas inaccessible to travel and residents scatter to subsistence hunting and fishing grounds. The mail service is spotty in rural Alaska and the internet connectivity unreliable, which makes door-to-door surveying important.

The rest of the nation, including more urban areas of Alaska, begin the census in mid-March.

[On the edge of America, census begins in a Western Alaska village]

On Tuesday, Steven Dillingham, director of the census bureau, conducted the first interview after riding on the back of a snowmachine from the airport to Chimiugak’s home.

“The 2020 Census has begun,” he told reporters afterward. “Toksook Bay isn’t the easiest place to get to, and the temperature is cold. And while people are in the village, we want to make sure everyone is counted.”

Dillingham was hours late getting to Toksook Bay because weather delayed his flight from the hub community of Bethel, about 115 miles away. Conditions didn’t improve, and he spent only about an hour in the community before being rushed back to the airport.

After the count, a celebration took place at Nelson Island School and included the Nelson Island High School Dancers, an Alaska Native drum and dance group. Later, the community took over the commons area of the high school with a potluck of Alaska Native foods, including seal, moose and goose soups, herring roe served with seal oil and baked salmon.

Robert Pitka, tribal administrator for Nunakauyak Traditional Council, hopes the takeaway message for the rest of the nation is of Yup’ik pride.

"We are Yup'ik people and that the world will see that we are very strong in our culture and our traditions and that our Yup'ik language is very strong."

[What to know as the 2020 census starts in Alaska]

For Chimiugak, she has concerns about climate change and what it might do to future generations of subsistence hunters and fishers in the community, and what it will do to the fish and animals. She talked about it with others at the celebration.

“She’s sad about the future,” he eldest son Paul said.

Chimiugak was born just after the start of the Great Depression in the middle of nowhere in Western Alaska, her daughter Katie Schwartz of Springfield, Missouri, said. Lizzie was one of 10 siblings born to her parents, who lived a nomadic lifestyle and traveled with two or three other families that would migrate together, her son said.

Lizzie and her 101-year-old sister from Nightmute survive.

In 1947, Lizzie married George Chimiugak, and they eventually settled in Toksook Bay after the town was founded in 1964 by residents of nearby Nightmute. There are five surviving children.

He worked maintenance at the airport and she did janitorial work at the old medical clinic and babysat.

Like other wives, Lizzie cleaned fish, tanned hides and even rendered seal oil after her husband came home from fishing or hunting. Her husband died about 30 years ago.

She is also a woman of strong Catholic faith, and told her son that she saved his life by praying over him after he contracted polio.

For her own hobbies, she weaved baskets from grass and remains a member of the Alaska Native dance group that will perform Tuesday, she dancing in her wheelchair.

She taught children manners and responsibility and continued the oral tradition of telling them stories with a storyknife.

Chimiugak used a knife in the mud to illustrate her stories to school children. She drew figures for people or homes. At the end of the story, she'd use the knife to wipe away the pictures and start the next story with a clean slate of mud.

“She’s a great teacher, you know, giving reminders us of how we’re supposed to be, taking care of subsistence and taking care of our family and respecting our parents,” her granddaughter Alice Tulik said. “That’s how she would give us advice.”