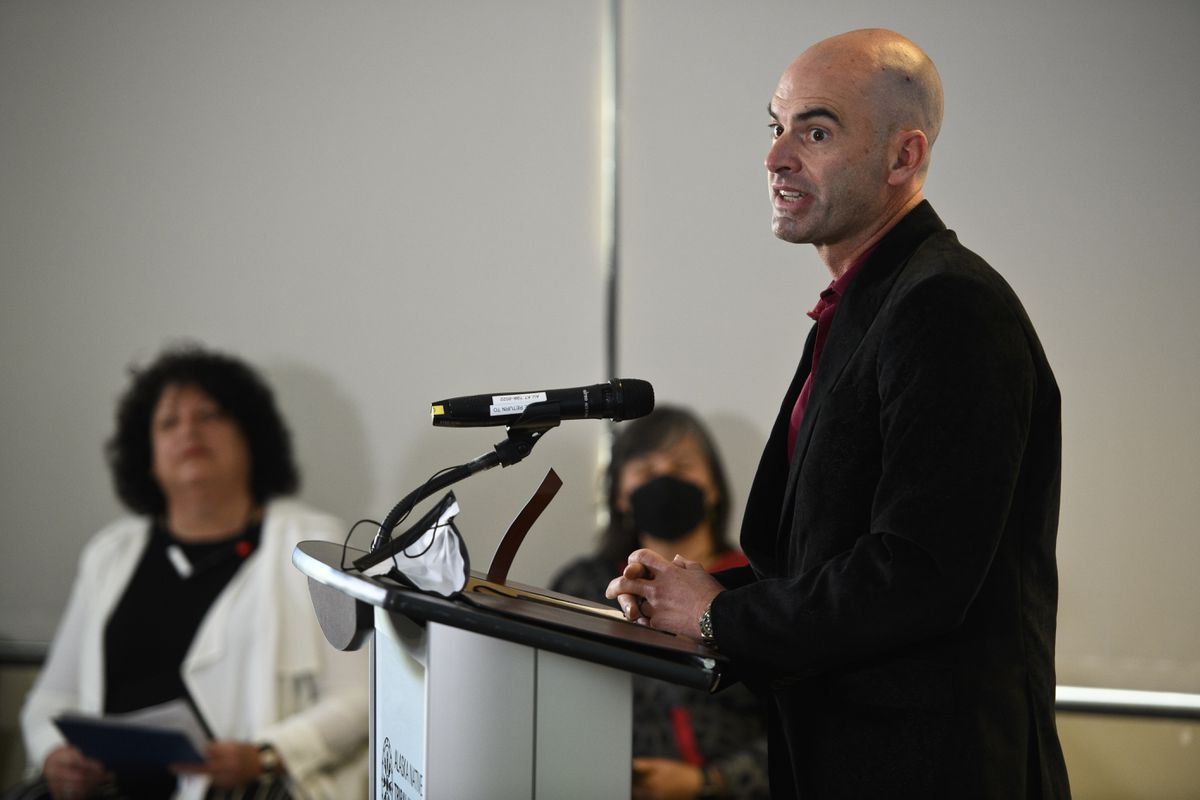 The Helmsley Charitable Trust is announcing a $20 million grant for water and sanitation improvements in Alaska. Projects will include installing remote monitoring equipment in villages statewide, and the construction of water and sewer projects in the Bering Strait region. Walter Panzirer, trustee of Helmsley Charitable Trust, discussed the grant in Anchorage on Monday, June 14, 2021. (Marc Lester / ADN)

The Helmsley Charitable Trust is announcing a $20 million grant for water and sanitation improvements in Alaska. Projects will include installing remote monitoring equipment in villages statewide, and the construction of water and sewer projects in the Bering Strait region. Walter Panzirer, trustee of Helmsley Charitable Trust, discussed the grant in Anchorage on Monday, June 14, 2021. (Marc Lester / ADN)

A New York-based charitable trust, a nonprofit and an Alaska regional health corporation on Monday announced a three-year plan to invest $20 million in improving access to clean water and sewer in parts of rural Alaska.

The funds will help support a utility-assistance program in 15 rural communities in the Norton Sound region of the state and to-be-determined water and sewer projects in those communities. It will also support the installation of water system monitoring equipment in dozens of other rural communities around the state.

The money is coming from the Leona M. and Harry B. Helmsley Charitable Trust, a private foundation based in New York with an endowment of over $8 billion.

The Helmsleys were New York real-estate magnates, and the trust began grant-making in 2008, after Leona Helmsley’s death. It is focused on health initiatives in communities around the world.

The grant will be implemented by the Engineering Ministries International, a Christian nonprofit made up of architects, engineers and surveyors, and the Norton Sound Health Corporation.

Neither EMI nor the Helmsley Trust have worked on projects in Alaska before, but the two entities have worked together on other projects worldwide. The idea for the funding project came when Walter Panzirer, a Helmsley trustee, visited Alaska in 2019 as part of a tour for philanthropies hosted by the Rasmuson Foundation.

In Alaska, roughly 3,300 rural homes in 32 communities have no running water or sewer, according to an estimate from the Alaska Department of Environmental Conservation. These families rely on water hauled from rivers and stored in drums, and honey buckets or outhouses in place of toilets.

Access to running water is a public health issue: Homes without running water have significantly higher infant hospitalization rates for pneumonia, according to the Alaska Native Tribal Health Consortium. And rates of invasive pneumococcal disease in Southwest Alaska are among the highest in the world.

Health disparities were exacerbated during the pandemic, when following public health guidance around frequent hand-washing and sanitizing was difficult for those without easy access to clean water.

This winter, several remote communities across the state struggled to maintain water services. For example, in Unalakleet — one of the communities slated to benefit from the grant — frozen, corroded pipes left over 40 homes without running water for weeks. Officials say remote locations with extreme weather make repairs difficult — and that the problem is decades-old and difficult to solve.

Diane Kaplan, president and CEO of the Rasmuson Foundation, said she views this project as a pilot program.

“We recommended Norton Sound because of the cohesive governance at Norton Sound and in the region itself,” Kaplan said. “(Norton Sound) was already laying the groundwork for a project like this, and they were very committed... to seeing it through.”

Angie Gorn, president and CEO of the Norton Sound Health Corp., said the health corporation is still in the early stages of determining exactly how the funding will be used. But first steps will include making repairs to existing water systems, and then beginning the process of installing running water in communities that are unserved, Gorn said.

The $20 million in funding represents just a small piece of what is needed to fully address the problem in rural Alaska, officials say.

“It costs millions of dollars to help a community get water and sewer if they don’t currently have it,” Gorn said. “And so with this funding that’s available, we’re hoping that we can look at what are the steps needed — maybe it’s a preliminary engineering report for one of those communities.”

It would cost about $1.8 billion to put in water pipes for all of Alaska’s unpiped communities and to repair the existing ones, the state Department of Environmental Conservation told the Daily News in March.

Gorn said she’s hopeful that within the next year, the funding will have allowed project managers to have a stronger plan in place, including a list of repair projects, and that community visits to assess need will begin this summer.

The utility assistance program is also in the works, she said.

“We do hope that homeowners (in the region) will see a reduction in their water and sewer bills hopefully within the next year and a half,” Gorn said.