Chunks of the Arctic Alaska coast are falling into the sea, but why? 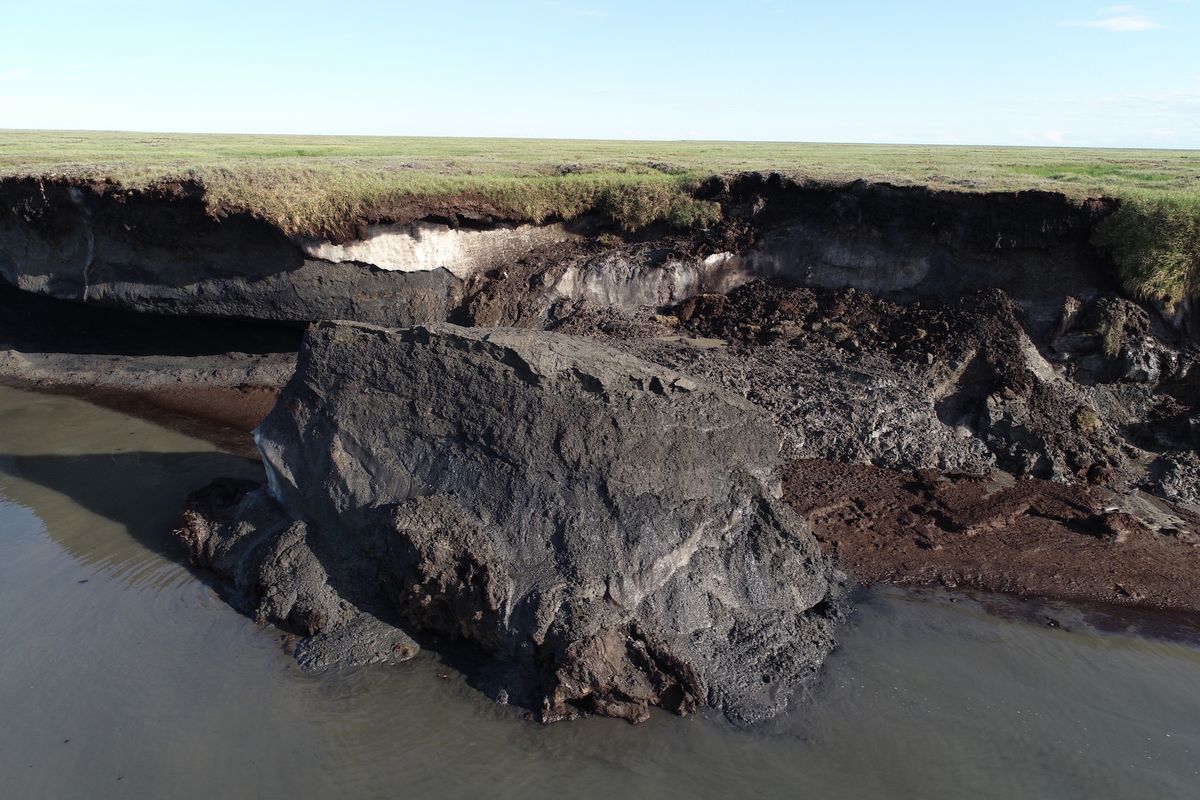 The frozen cliffs of Drew Point, Alaska (population zero), are tumbling to the ocean faster than perhaps any other location in the Arctic. The sea has recently eaten house-size chunks of tundra at a rate of more than 50 feet per year.

Ben Jones has watched pieces of Alaska’s northern coast disappear since 2003. Then, as a University of Cincinnati researcher, he flew over Drew Point and saw blocks of tundra and frozen soil that had detached from the land and leaned into the sea like capsizing ships.

Recently, he and Chris Arp, both of UAF’s Water and Environmental Research Center, snowmachined out to Drew Point in dim winter light. With the landscape now locked up for the long polar night, they went to see if they could gather a deeper plug of soil from a chunk of land that had fallen into the ocean in summer 2018.

They wanted to find out if salty, unfrozen soil at its base might have something to do with why the 20-foot cliffs at Drew Point are losing so much to the ocean. But they found conditions too challenging, and not because there is no sunrise up there this time of year.

“There was a lot of slushy snow and water at the base of the bluff,” Jones said in an email from Utqiaġvik, where he and Arp stayed after returning by snowmachine from a cabin on the northern shore of Teshekpuk Lake, about 60 miles southeast. “It would have made coring pretty challenging in the subzero air temps.”

They will attempt a deeper soil sample into the bluff on a scheduled trip up there in April 2019. For now, the mystery will remain as to whether the “cryopeg” — salty permafrost that is unfrozen and crumbly — is in a big way responsible for the drama at Drew Point.

The photogenic nature of Drew Point seems to be increasing. Jones, Arp and coauthors in a recent paper calculated that the northern coast there is losing 56 feet per year to the Arctic Ocean. In the most drastic year they measured, 2016, the sea consumed an average of 72 feet of a 5.5-mile stretch of coast around Drew Point. Even in a low year of land loss at Drew Point, 21 feet of coastline disappeared.

For a Washington Post reporter, Jones in November calculated that the ocean is gobbling about 30 football fields of land from the area each year now.

Erosion of coastlines is normal, but the north coast of Alaska is different, with its core of frozen ground and wedges of ice that formed during a colder period of Earth’s existence. Though the ocean is capped with sea ice most of the year, for a three- to four-month window the relatively warm water eats at the cliff bases until they fall, exposing new faces to warm air and ocean waves.

“It provides more time for waves to erode the base of the bluff,” Jones said.

The researchers have pulled cores of soil from the bluff tops. Last summer, they cored a bit deeper than usual and noticed a structureless section near the base of the bluffs, a deposit of “saline permafrost that was unfrozen at minus 8 degrees Celsius.

“We never really thought about it before, until we pulled up these cores,” Jones said. “The salinity of these soils (at the base of the cliffs) increases the erodibility of these deposits.”

Next spring, when soil-drilling is more feasible, Jones and Arp hope to get soil cores from about 6 feet below beach level, to see how extensive the unfrozen permafrost is, and to maybe find some clues on whether salty, unstable permafrost is becoming more common as the Arctic warms.