Over 6,100 aftershocks: Why are different quake magnitudes reported, and when do these stop being aftershocks? 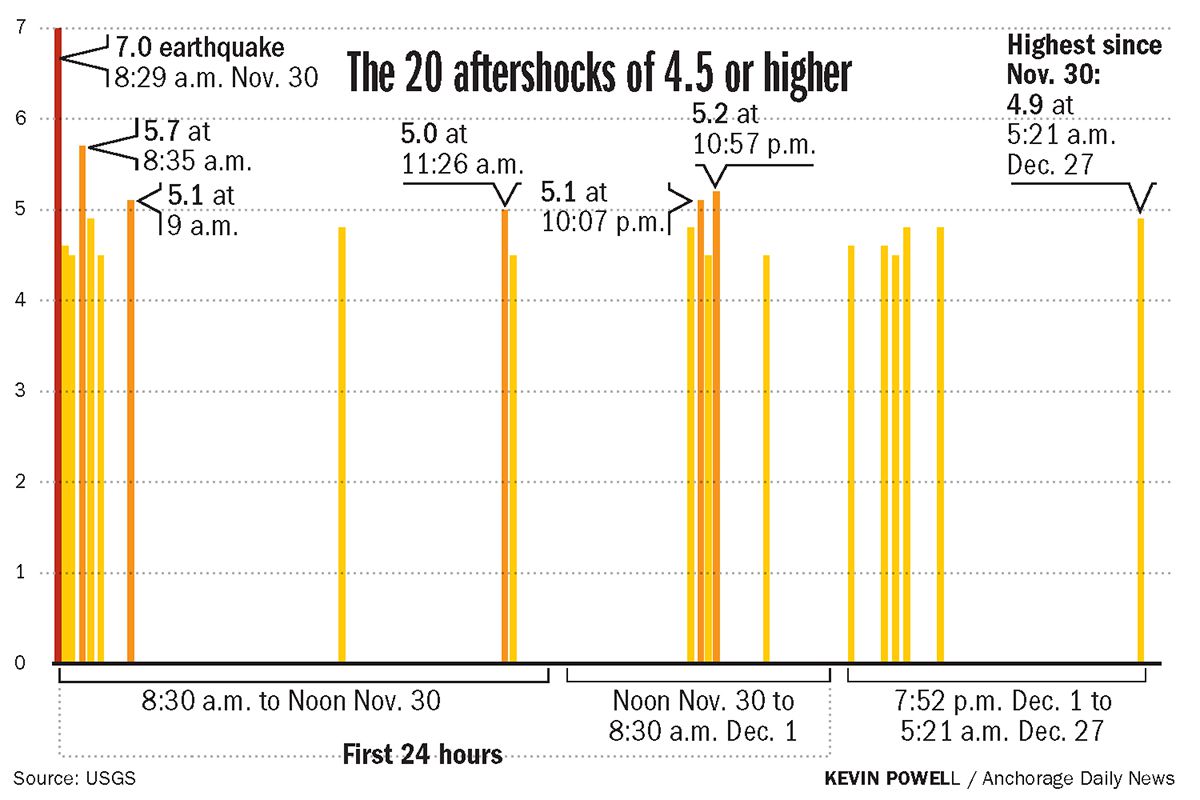 An aftershock that shook Southcentral Alaska around 5:21 a.m. Thursday is the latest in a series of more than 6,100 since the Nov. 30 earthquake, according to the Alaska Earthquake Center. It’s also the strongest one in weeks, with a reviewed magnitude of 4.9.

With aftershocks expected to continue for several more months, the Anchorage Daily News asked Natalia Ruppert, a seismologist with the Alaska Earthquake Center in Fairbanks, to shed some light on what’s really happening underneath the earth and what it means for Alaska residents.

[Find all of our earthquake coverage here]

Why does an earthquake’s reported magnitude sometimes change?

Thursday’s aftershock was originally reported as a 5.0, but its magnitude was changed to 4.9 within a few minutes. That’s because of how the Alaska Earthquake Center measures seismic waves, Ruppert said.

The center has about 500 sensors placed throughout the state. When an earthquake happens, the sensors nearest to the epicenter will be the first to record its location and magnitude, with more and more sensors recording data as the seismic waves travel outward. Ruppert said that because the sensors record data in real time, the preliminary magnitude that the algorithm records in the first few moments after the earthquake may not be entirely accurate.

Because of this, the Alaska Earthquake Center has a seismologist on duty 24 hours a day, seven days a week to verify earthquake data generated by the sensors.

“Sometimes computers make mistakes, and human eyes can differentiate between erroneous determinations and what it’s actually supposed to be,” she said.

These preliminary estimations tend to be what show up on earthquake alert apps, but they may not update once a seismologist has reviewed — and if necessary, corrected — the data, Ruppert said.

Granted, the seismologists' findings typically don’t differ that wildly from the computer’s, she said. The reviewed magnitude is typically within two-tenths or three-tenths of the computer’s estimate, and the estimated location is usually within a few miles of the actual epicenter.

Occasionally, though, the sensors can record what Ruppert calls a “bogus earthquake," like the one the Alaska Earthquake Center recorded at 5:21 a.m. Thursday in Interior Alaska. That earthquake registered as a magnitude 4.5, but once seismologists determined it didn’t actually happen, it was deleted.

Are these still aftershocks, or are they new earthquakes?

Earthquakes in Southcentral Alaska will continue to be considered aftershocks until seismic activity in the region returns to its “normal” level, meaning the level it was at before the Nov. 30 mainshock hit, Ruppert said. "Normal” for Southcentral Alaska is about 10 earthquakes per day, she said.

Right now, we’re still well above that baseline — since the Nov. 30 earthquake, the region has experienced an average of about 10 earthquakes per hour. Once we return to that baseline of 10 earthquakes a day and stay there for about a month, Ruppert said she would consider the aftershock period to be over. However, that’s not expected to happen for several more months, and aftershocks may persist for up to a year, she said.

Location also plays into what is considered an aftershock. The Nov. 30 earthquake happened along a “fault patch” about 20 miles long and 10 miles wide roughly positioned underneath Point Mackenzie. Only earthquakes that happen within that region would be considered aftershocks, she said.

Why do some aftershocks feel bigger or smaller than the reviewed magnitude?

“It depends on where you are,” Ruppert said.

It’s difficult to gauge magnitude based on shaking alone because a person closer to the epicenter is likely to experience more shaking than someone farther away, she said. At the Alaska Earthquake Center lab, she said, the magnitude 7.0 earthquake didn’t feel like a 7.0 because the lab is in Fairbanks, more than 300 miles from the epicenter.

Most of the thousands of aftershocks recorded since Nov. 30 have been too small to feel.

Are we in danger of something bigger?

However, Ruppert cautioned Alaskans to take care when they participate in outdoor recreation. Continuing aftershocks mean that faulty ice and avalanches are still a hazard, she said.