Why the 7.0 earthquake was felt differently across Anchorage 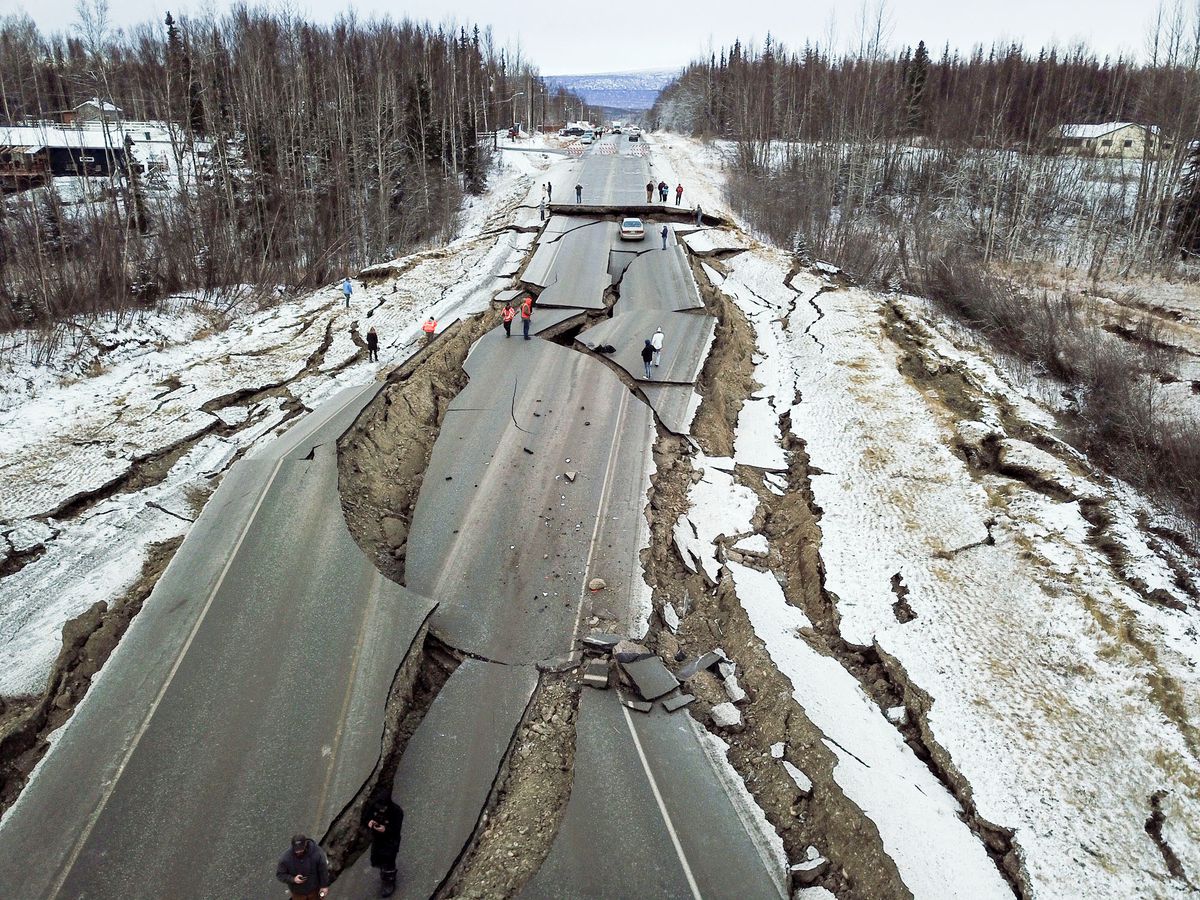 The 7.0 earthquake just north of Anchorage on Friday morning shredded the earth with 2 million tons of explosive force, and generated 650 aftershocks within 30 hours, some of them large enough to rattle residents all over again, experts say.

There’s a good chance more nerve-rattling aftershocks are yet to come.

A forecast issued Saturday by the U.S. Geological Survey gives an 88 percent chance of more magnitude 5.0 aftershocks, like the two that jolted the city and surrounding areas late Friday night.

Five aftershocks with magnitudes between 5.1 and 5.7 had occurred as of Saturday evening.

This map was made using strong motion seismometers, mostly in Anchorage schools and firehouses. It's a good illustration of the differences in shaking across Anchorage. pic.twitter.com/HGa8vcpR0M

The aftershocks have generally diminished in intensity and are expected to continue doing so. It’s far less likely that a 6.0 aftershock, or greater, will occur, the weeklong forecast says.

But residents should remain cautious as the power released by the quake fades, experts said.

People should keep a safety plan in mind, such as what desk or table they’ll dash under for protection, said Gavin Hayes, a research geophysicist with the USGS National Earthquake Information Center.

“It’s difficult to deal with aftershocks because you never how long they will last,” he said.

How long did the earthquake last?

Following the earthquake Friday morning, geologists raced to analyze the swarm of aftershocks and other details. On Saturday, they offered explanations why it was felt differently across the region, and seemed to last longer for some people than others.

A person’s perception is critical, but other factors count too, said Hayes, who said he’s heard ranges of the duration lasting 30 seconds to a couple of minutes.

“Time really slows down when you’re in an earthquake like that,” Hayes said. “It has a lot to do with personal perception and where you are in Anchorage, and of the specifics of the local geology you stand atop.”

The rupture occurred as a giant slab of crust some 30 miles below the ground was being pulled apart like a Snickers bar, said Peter Haeussler, a USGS research geologist in Anchorage. That plate is being yanked beneath the southern part of Alaska.

The rupture stretched about about 19 miles.

That’s a fraction of the rupture during the massive 1964 quake, which extended 500 miles and was much shallower, he said.

Anchorage residents felt that quake for four minutes -- much longer than Friday’s motion -- in part because the ’64 rupture released energy across a sprawling area, from Prince William Sound to Kodiak.

On Friday, the first waves of energy issued by the earthquake would have reached Anchorage in about seven seconds, in the form of primary waves, Hayes said.

Those are sound waves. When they arrive, people might hear something like a loud truck rumbling up the street.

The secondary waves come after, and should have reached Anchorage in about 13 seconds, Hayes said.

“That’s the big shake,” when there’s suddenly violent jolting that leaves no doubt a quake is underway, Haeussler said.

The different arrival times are also one reason why some felt Friday’s quake lasted different lengths of time.

People farther from the epicenter could have experienced the quake longer, because the difference between different types of waves lengthens.

A bigger factor are the varying types of material beneath Southcentral Alaska, geologists said. People in homes on solid bedrock experience the shaking more quickly, as abrupt jerking. People on clay soils, such as in West Anchorage, experience a longer, jiggling motion.

Seismologist Carl Tape on Saturday posted time-lapse simulations on YouTube showing surface motion as the earthquake rippled across the city and state.

The seismic waves change as they move from silty basins like Cook Inlet and strike bedrock, bouncing back. That keeps the ground moving for longer periods in certain areas.

“They are like a wave in water hitting a log in the middle of a pond. It just bounces right back,” he said.

Data he’s seen shows the “really strong shaking was less than a minute” in the Anchorage area, Tape said.

But the simulation also shows the ground kept moving for up two minutes in some areas. That can also help explain why the quake seemed to last longer for some people than for others, he said.