Iditarod: One of the last Gold Rush towns 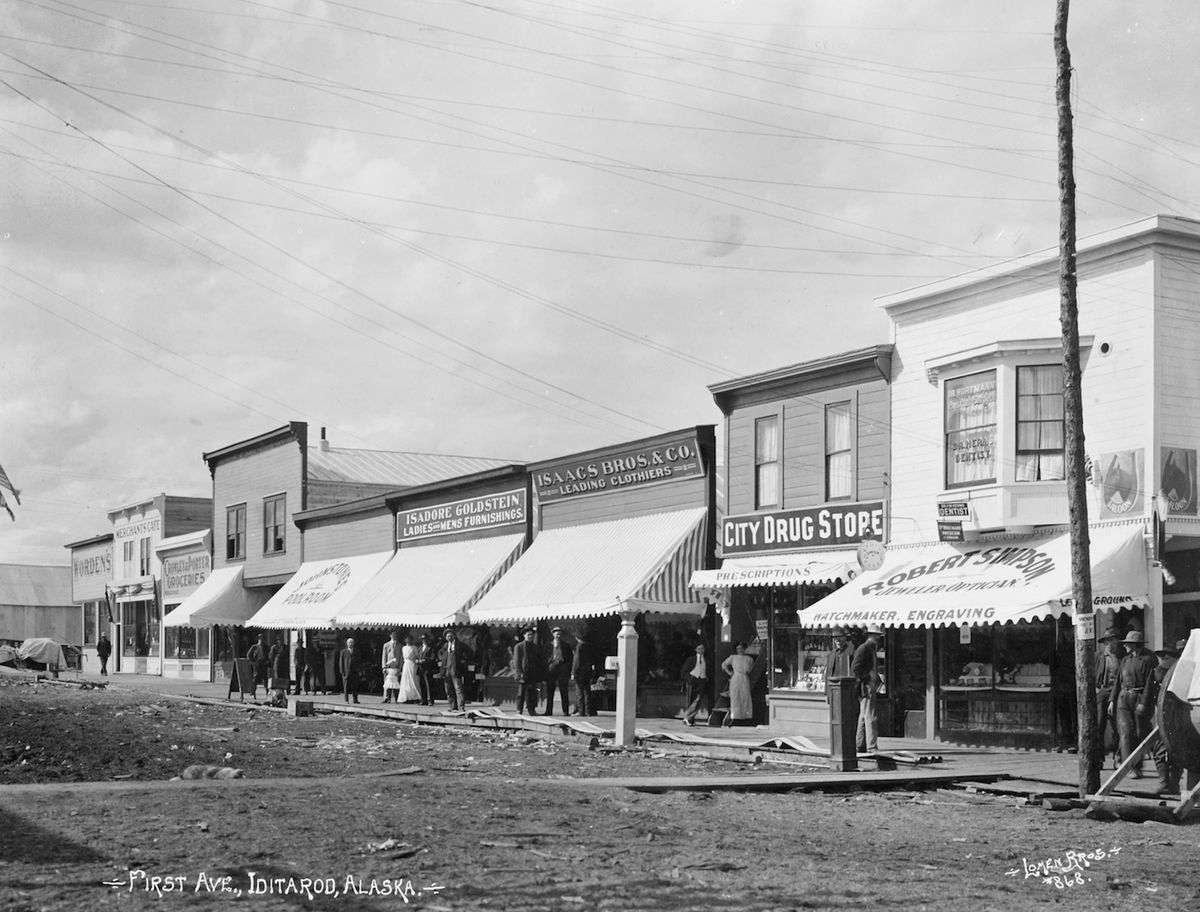 First Avenue in the town of Iditarod around its peak in 1911. (Lomen Brothers photo, UAF Archives)

First Avenue in the town of Iditarod around its peak in 1911. (Lomen Brothers photo, UAF Archives)

The mushers were gone, and so were the 640 dogs that pulled them out of town. A few days earlier, the volunteers who gave life to Iditarod had climbed into their single-engine planes and lifted off the ice, carrying their noise along with them.

Iditarod City was now quiet, except for the whoosh of ravens scanning for frozen morsels in piles of straw. And (Could it be? Yes!) the melancholy howls of a half-dozen wolves, wafting from the derelict buildings 100 yards across the slough.

Iditarod is a lonely place. A century ago, for a few years it was the largest city in Interior Alaska.

A few weeks ago, Bob Gillis and I were the only humans in town, having skied and tundra-walked to Iditarod from the village of McGrath. Moving along on the Iditarod Trail, we had not seen anyone else in four days. It would be three more days before we did, in the village of Shageluk, 60 miles away.

Trying to figure out Iditarod’s story while we were there was like trying to imagine someone’s life by visiting a cemetery. We put the pieces together later, with help from “Iditarod: Portrait of an Alaska Gold Rush Community,” the detailed 1988 Ph.D. thesis of University of Northern Arizona student Billy Mackey.

Iditarod got its start after two prospectors found gold at nearby Otter Creek on Christmas day, 1908. The first steamship to reach the site of Iditarod arrived from Fairbanks. The Tananamade the 1,000-mile trip via the Chena, Tanana, Yukon, Innoko and Iditarod rivers in June, 1910. Ships only made it to Iditarod during high-water periods, like snow-melt time in May and June.

At its peak in September 1910, Iditarod was home to 2,500 people. It was a mature Gold Rush town; many people there had lived through other stampedes. Unlike other boom towns, there was only one recorded murder and one robbery there.

There were no gold mines at Iditarod. Like Fairbanks, the town was the supply and commerce center for nearby diggings. In Iditarod’s case, these were on Flat and Otter creeks.

The Iditarod River and the town’s famous name is “probably an English distortion by prospectors of the name of an Indian village” on the river, wrote Donald Orth in Alaska Place Names.

Its uplands fringed with young birch trees, Iditarod is surrounded by tundra. The few buildings left in the town, each now resembling a house of cards frozen in the act of falling, are made of milled lumber rather than spruce logs. The wood for construction came from very far away.

Founded late in the Gold Rush, when almost all the other booms in Alaska had busted, Iditarod was born in an era of technological advances, a few of which later turned it into a ghost town.

During its brief peak in 1910, the town hosted six hotels, six lawyers, six clothing stores, six building-supply stores, three furniture stores, two banks and telephone service to nearby mining camps that was available for $30 monthly. There was also a horse-pulled tramway on wooden rails that led eight miles to the town of Flat.

Walking around Iditarod, Bob and I ducked into the leaning warehouse for the Northern Commercial Company. On one wall was a yellowed steamer schedule, showing when ships like the Tanana from Fairbanks might arrive, if everything went right.

One hundred feet from the warehouse is a bizarre sight so far from civilization: A concrete vault the size of a garden shed. Its walls are two feet thick. Its two metal doors have combination dials that no longer spin. The framework of the Miners and Merchants Bank has fallen down around the vault, which will probably be the most enduring artifact in Iditarod.

A few fortunes passed through that safe. In November 1920, officials with the bank sent a shipment of gold weighing 2,600 pounds out on the newly completed Seward-to-Nome Trail. They wanted to see if moving gold by dog sleds to Seward was practical. It was, and $3 million worth of gold slid over the trail during the next decade. The trail became known as the Iditarod Trail, because that’s where all the money was coming from.

Walking on the hardened snow crust, Bob and I guessed one of the largest collapsing structures, with its bedframes and flowered canvas wall coverings, was a roadhouse. In his thesis, Mackey identifies it as Mitchell’s Hotel. Joe Mitchell was one of only three people who remained in Iditarod by the year 1930.

What happened to Iditarod?

The town’s decline began when the Guggenheim-owned Yukon Gold Company purchased most of the claims in Flat. Company executives shipped dredges from the Klondike to Flat. The huge gold-digging machines required many fewer men to operate.

As people left the town, the new construction of the Alaska Railroad drew a few businessmen to what would become Anchorage. Z.J. Loussac, who owned a drug store in Iditarod, later became mayor of Anchorage.

The arrival of the first airplane on a landing strip at Flat in the mid 1920s also hastened Iditarod’s end. Miners at Flat had created the airstrip by smoothing out gravel tailing piles. Iditarod, surrounded by swamp, had no spot for a plane to land. Suddenly, lighter things like food could arrive in Flat from Fairbanks or Anchorage in hours instead of the weeks they took by river or trail.

The miners themselves might have helped seal Iditarod’s fate. By dumping rock tailings and dirt into the Iditarod River upstream of the town, they introduced an incredible amount of silt to the river. This may have been the cause of the shifting of the river channel away from Iditarod, which got cut off and now fronts a buggy backwater slough.

By the 1920s and 1930s, miners moved many Iditarod buildings to Flat. The Northern Commercial Company kept a store in Iditarod, run by Joe Mitchell, who had owned the hotel. When company shareholders closed the store in 1951, Mitchell left Iditarod, catching a plane out of Flat. As the plane flew over Iditarod, Mitchell looked down on empty streets and buildings leaning into the tundra.