A 60-mile walk under the midnight sun, with no stops for sleep 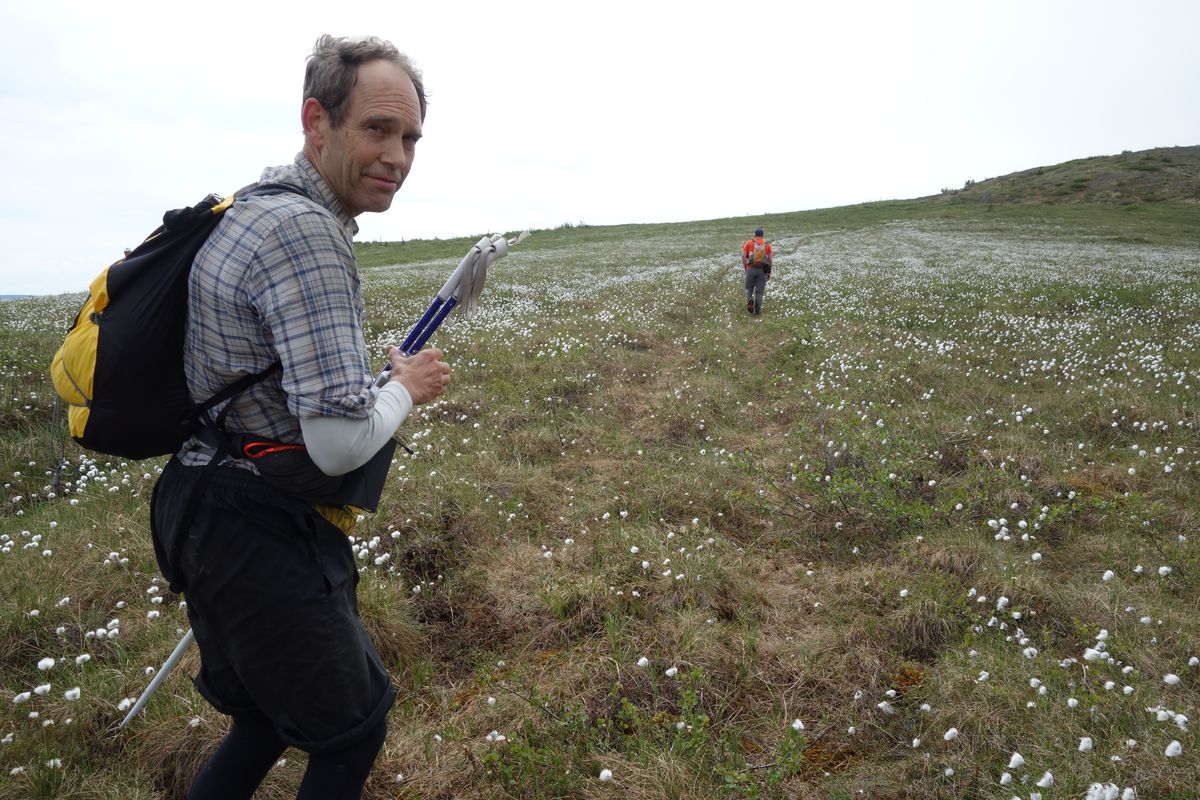 On a Saturday morning near summer solstice, nine people stood on a smoothed pile of gravel at Mile 5 of the Dalton Highway. A man talking to the group, the fur of a wolverine wrapping his head, had invited us to what he called AlaskAcross 2019, a nonstop 60-mile hiking traverse in Interior Alaska, from Lost Creek to Eureka.

Mark Ross, wearing the wolverine fur, is a naturalist at Creamer’s Field Migratory Waterfowl Refuge in Fairbanks. He invented this cross-country, unsupported event, and alerted those who might be interested with a series of sporadic emails.

Two other recipients had asked me along. I knew better but said yes; here was my yearly opportunity to mark the light and energy of summer solstice by — just once — staying up all night.

After an awkward group photo, Mark said go. The nine of us filed onto a four-wheeler trail that led off the highway and into the boreal forest.

After one of my partners bailed because he wisely figured we might not finish the endeavor before the start of a family vacation two nights away, I was walking next to Jay Cable.

Writer Craig Medred described Jay as an “Alaska hardman” in a story about Jay and Tom Moran winning the summer 2018 Wilderness Classic, a longer, more difficult version of Mark Ross’ race. A friend who had done a trip with Jay a week earlier had called him a beast.

I giggled nervously as I thought of keeping up with Jay over the hill and dale ahead. But I had traveled with him before under similar circumstances. He is a cheery guy and didn’t seem to mind waiting for me after he had bull-moosed ahead.

Jay works for the Geographic Information Network of Alaska at UAF’s Geophysical Institute, which means he spends a lot of time looking at satellite images, which means he had a route mapped out with a red line spilled over maps on several electronic devices, backed up by paper maps.

Like most of the other participants, Jay wore something that looked like a daypack, only smaller. I giggled nervously at my pack, which could fit all the stuff you needed for a week’s trip. But, as we agreed beforehand, there would be no tent; we would try to complete the 60 miles through tundra valleys and hopefully rocky ridges in one push.

As we gained the first ridgetop, the one shown as pale yellow on topo maps, we entered a dream landscape of flowing white. From a distance, it looked like blowing snow. Cottongrass is a lovely sedge of waving white seedballs, as soft as a puppy’s belly. It grows throughout the far north, in acidic bogs.

Bog is not what we had hoped for on those hilltops. For more than a marathon distance, our steps were squish and sponge in faint four-wheeler tracks pressed into the elevated swamps. At one point, Mark pushed a basket-less ski pole into the soft mat until it stopped at the frozen ground beneath. That permafrost barrier to water drainage was less than a foot below the warm air of summer.

At that same brief pause, Mark got excited at Jay’s mention of a wood frog he saw in one of the puddles on the ridge, a few hundred feet and several miles from the nearest tree. Somehow, these creatures with the hearts and brains that thawed about a month ago had hopped their way up to this tundra bench.

After Mark disappeared on his own route and Jay and I continued into the endless day, the natural rewards continued. We heard the song of the American robin, familiar to every human living in North America, here making a summer go of it in the unpeopled dense alders and spruce beneath Sawtooth Mountain.

We skirted around the bottom of that hulk, with its black jagged rocks on top, a landmark that attracted race participants to get to know it better after seeing the mountain from hilltops near Fairbanks.

None of us hiked to the top of the 4,494-foot Sawtooth Mountain, so we all missed the mine on top. From a hole in the ground up there, Alaska independence advocate Joe Vogler in 1950 removed 500 tons of antimony. The lustrous gray metalloid is mixed with lead to make it stronger, and is used as flame retardant in children’s clothes and car-seat covers.

We passed beneath Joe Vogler’s wilderness mine at 2 a.m. The air smelled earthy, of cool, damp moss. The sun had dipped behind Sawtooth Mountain about 45 minutes before. With summer solstice less than a week away (June 21 at 7:54 a.m. in Alaska), the night was bright enough to read a map, even in a tunnel of alders.

After 24 hours of travel, our backs again felt the sunshine at 10 a.m. The warmth overrode our circadian rhythms that had screamed sleep during the dusky hours.

We then started to ascend our last significant obstacle — Elephant Mountain. Once we traversed that massif, which sports a rock formation that after a day without sleep really looks like an elephant’s head, all we needed to do was find a dog-musher’s trail that led to the finish. That was in Eureka, at Wild and Free Mushing, the kennel and home of 2019 Yukon Quest winner Brent Sass.

We were on Elephant Mountain for 7 miles and seven hours, making it easy to calculate our pace. From the top, we saw a bend of the Yukon River to the north and the million lakes of Minto Flats to the south.

Lichen fields on the mountain had once held the footprints of Rocky Reifenstuhl, a longtime Alaska geologist and bike- and foot-racing legend. Rocky died in 2014 at the age of 61 due to heart problems.

Rocky walked all over Elephant Mountain in the 1990s, describing it in terms that expose geology as one of the most challenging disciplines to translate: “Its composition ranges from diorite to granite, but it mostly is trachytoidal, quartz-free syenite and subequigranular quartz syenite.”

We were on our 35th hour without sleep when we plunged off Elephant Mountain into the thick brush and mosquitoes of the forest. I thought a bit about Rocky as I struggled to keep up with Jay, who was busting through the brush like the scared mama moose we saw running across the tundra, trailing her orange calf.

“You go into a completely different state of mind,” Rocky once told News-Miner reporter Tim Mowry regarding his sleepless treks across Alaska. “I love to see what my body can achieve.”

With Jay enduring my hobble along a nice firm trail to the finish, we arrived at the extra-long driveway of Wild and Free Mushing. Through a fog of mosquitoes lit by the slanted rays of 11 p.m. solstice sunshine, Jay and I saw our friend Trusten Peery walking toward us. Behind him, on the hood of his truck, we saw two pizza boxes.