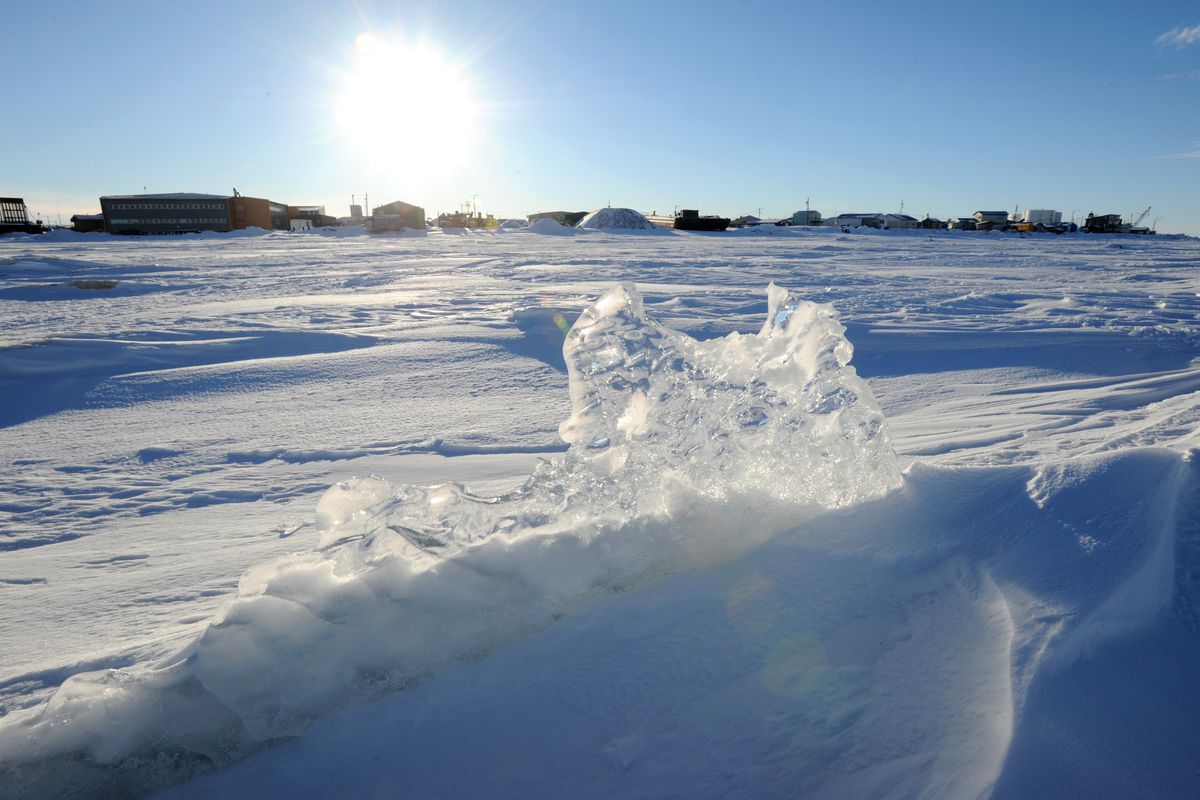 Ice stacked up on the Kotzebue Sound near Kotzebue during a sunny afternoon on Feb. 16, 2015. An ice fisherman said the ice was about 3 feet thick, about half of what they normally have that time of year. (Bill Roth / ADN archive)

Ice stacked up on the Kotzebue Sound near Kotzebue during a sunny afternoon on Feb. 16, 2015. An ice fisherman said the ice was about 3 feet thick, about half of what they normally have that time of year. (Bill Roth / ADN archive)

When strong winds jumble and crunch up existing ice in certain areas, it can cause unsafe travel conditions “potentially for the rest of that year if it happens early enough,” Whiting said.

The future looks increasingly windy for some coastal communities in northwestern Alaska like Kotzebue: New research published in the journal Atmospheric and Climate Sciences showed that high wind events have increased since 1980 and will continue over the course of this century in areas along the state’s northwestern coast.

Researchers Sarah Pearl, an undergraduate student at Dartmouth College, and John Walsh, chief scientist at the International Arctic Research Center at the University of Alaska Fairbanks, wanted to better understand what Alaska’s wind patterns looked like in the past and what they could look like in the future, based on two climate models.

So, they compiled hourly wind information from 67 airport wind monitors, known as anemometers, around Alaska.

They found that high wind events were happening more frequently over the decades in northern and western coastal regions in Alaska. They also found that the same high wind storms could become more frequent in areas that had lost sea ice due to changes in the climate.

The presence or lack of sea ice can change how much a storm impacts the coast, Walsh said.

“The ice tends to protect the coast when there’s a strong storm. The storms will pick up large waves when there’s no sea ice present," Walsh said. "When sea ice is present, the waves will be essentially nonexistent.”

Without that protective sea ice barrier, communities can be left vulnerable to pounding waves that cause coastal erosion during storms, Walsh said.

In places like Kotzebue, strong winds can bring floods, loss of power and variable conditions that make hunting and travel difficult, Whiting said.

The wind can push coastal water into Kotzebue and flood roads, Whiting said. And if the wind takes down the electricity in the winter, homes and businesses would lose heat, and people working to restore power would be exposed to high winds amid plummeting temperatures.

“As temperatures rise, storm tracks are projected to be moving northward under a changing climate," Pearl said. "That’s consistent with our findings from these model projections that we would see an increasing frequency in high wind events in the north of Alaska and possibly a decreasing frequency in the south.”

The team decided to study wind after noticing there was little research on wind in the context of climate change compared to other factors like temperature and sea ice, Pearl said.

“I think these types of studies are especially important for planning by the local communities to understand what sort of extreme events might happen in the future,” said Alice DuVivier, a polar climate modeler at the National Center for Atmospheric Research in Boulder, Colorado, who was not involved in the study.

The hazards created by strong winds are exponential for Kotzebue and the surrounding areas, Whiting said.

“And that’s why when we think about our activities for the day,” he said, "wind in some ways is the most important factor in how we’re going to plan our day and what kind of activities we’re able to do.”