The Alaskan's guide to surviving breakup 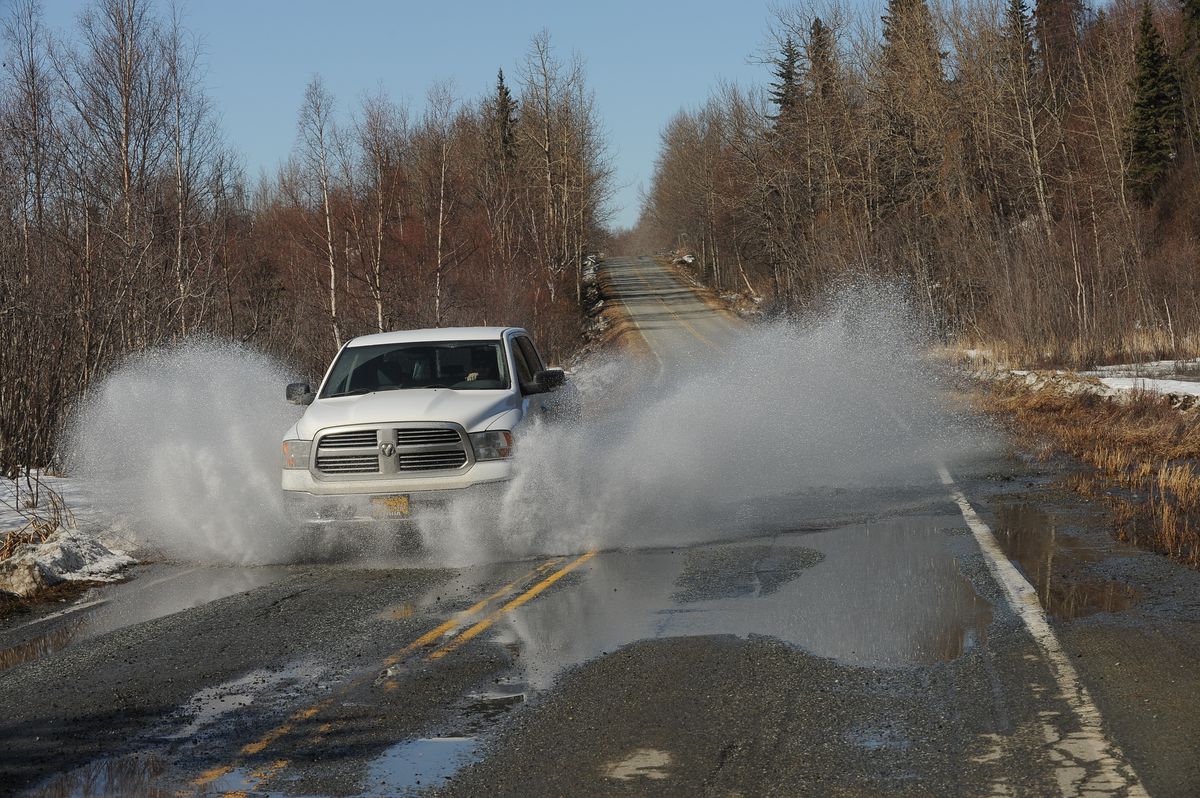 A truck splashes through water on the Old Seward Highway on the backside of Potter Marsh in South Anchorage on Wednesday. (Bob Hallinen / Alaska Dispatch News)

A truck splashes through water on the Old Seward Highway on the backside of Potter Marsh in South Anchorage on Wednesday. (Bob Hallinen / Alaska Dispatch News)

Winter and spring in Alaska can be wondrous times. It's the season in between that's the problem.

Characterized by the smell of decaying trash emerging from snowbanks, standing water in the roadways and an oppressive, drab brownness, breakup comes with a set of challenges Alaskans must confront before they can flip the switch in their brains from "winter" to "spring."

From swapping out your studded tires to calling in that ever-expanding pothole on your morning commute, here are some practical steps for getting through breakup.

Saturday is the first of two Alaska deadlines for the removal of studded tires, according to the state Division of Motor Vehicles. Tires must be removed by April 15 in southern areas of the state and by May 1 in the rest of Alaska, including Anchorage.

Saturday's deadline covers the Aleutian Islands, Kodiak and Southeast Alaska, troopers spokeswoman Megan Peters said, but she urged drivers to change tires sooner rather than later if the roads are clear.

"It's better for the roadways – studded tires really do a number on the streets, so it's better for everybody to take them off," Peters said. "Save yourself some time and get on it now because the lines are already ridiculous."

At the Johnson's Tire Service store in Midtown Anchorage, manager Mike Hagler said people arriving early to get their tires changed should expect a wait. About a dozen people are usually in line when the store opens, though that number grows as May 1 approaches.

Although some scofflaws might challenge troopers to spot studded tires on the road, Peters said catching violators is as easy as rolling down the window.

"You can hear them," Peters said.

Being pulled over by troopers with out-of-season studded tires carries a $50 fine, which is correctable and can be waived by changing to normal tires within 30 days. If you're stopped by Anchorage police, the fine is $50 per tire, which isn't correctable.

Alan Czajkowski, the municipality's director of maintenance and operations, said issues with potholes in Anchorage haven't been particularly bad so far this breakup.

"We have three crews out pretty much every day," Czajkowski said. "Our goal is to get 'em filled within 24 hours."

Starting this week, road crews have also turned their attention to sweeping city streets, beginning downtown and working their way along arterial and collector roads.

State road crews with the Department of Transportation and Public Facilities in Anchorage have also been patching potholes "day and night" for the past week and a half, spokeswoman Shannon McCarthy said.

"This season doesn't seem any worse that the last two years," McCarthy said. "That being said, there are definitely potholes out there and we want people to report them."

Roads are generally being prioritized for pothole work in the same order they are for winter snow removal.

"Sometimes, if a pothole is particularly concerning, we might go out and repair it right away; sometimes we try and group them," McCarthy said. "It does depend on the situation."

Cherie Northon, executive director of the Anchorage Waterways Council, said the city's nearly 74,000 dogs generate about 20 tons of poop per day. Much of that ends up outdoors, which can come as an unpleasant surprise when winter snow melts.

"Anytime this time of year, when something emerges from the snow, everyone says, 'Oh my God, this is the worst year ever,'" Northon said.

As a result, the council has worked with the state to set up more than 140 "mutt mitt" stations across Anchorage, which dispense plastic gloves for use in cleaning up after canines. The city doesn't have workers dedicated to cleaning up dog poop, Northon said, so some good Samaritans take it upon themselves to clean parks and ask owners who don't clean up after their dogs to do so.

In addition, the council will hold a Scoop the Poop Day on April 29, when volunteers will clean up a pair of Anchorage dog parks – but Northon said that effort isn't a substitute for year-round care by owners.

Laura Atwood with Anchorage Animal Care and Control points out that city code allows owners to be cited for dog poop left on property other than their own or at city dog parks.

"It is the law, of course, that you pick up after your dogs," Atwood said.

In recent years, Alaskans may have also noticed another, more dangerous hazard emerging from melting snow berms around their communities: used drug needles.

You don't need to call police if you find a needle, Anchorage Police Department spokeswoman Renee Oistad said, but people should be careful if they decide to dispose of them.

"If you're wearing gloves and if you have a container, you can put the needle in – it can be anything, an empty milk container, a detergent bottle. You can throw that in the trash safely," Oistad said.

Northon said there have been reports of needles thrown off bridges over Chester Creek near C Street.

"If people are dumping them off, it'll be in the center of the creek where people generally aren't recreating," Northon said.

The reports are "terribly concerning," Northon said, as the council prepares for a four-day creek cleanup May 11-15.

Four A's — the Alaskan Aids Assistance Association — can dispose of needles. Laura Herman, Four A's director of development, recommended that people use relatively puncture-proof containers like used soda bottles to carry needles. They can be dropped off at Four A's Fireweed Lane location from 9 a.m. to 5 p.m. weekdays.

As bears emerge from hibernation, they've begun to make their presence known in the Anchorage and Turnagain Arm areas, according to Alaska Department of Fish and Game spokesman Ken Marsh.

"There was a mother black bear with a couple of young cubs that were seen in the Anchorage area," Marsh said Thursday. "We've also had some reports of black bears stepping out in the Eagle River-Chugiak area."

Intentional or unintentional feeding of bears is a state crime, but bears ransacking garbage cans in Juneau were reported to Fish and Game this week. Alaskans can prevent bear problems by taking down bird feeders, only putting out trash on the day it's collected and cleaning up other potential attractants like dog food.

Marsh reiterated advice the department gave about wildlife last month, after a pair of incidents in which people encountered aggressive Southcentral Alaska moose.

"Generally, give animals a wide space," Marsh said. "Give moose plenty of space, because they're coming out of a harsh winter nutritionally stressed and may be a bit grumpy yet."

The department is urging people to report encounters with wildlife by either calling 911 or using its website.