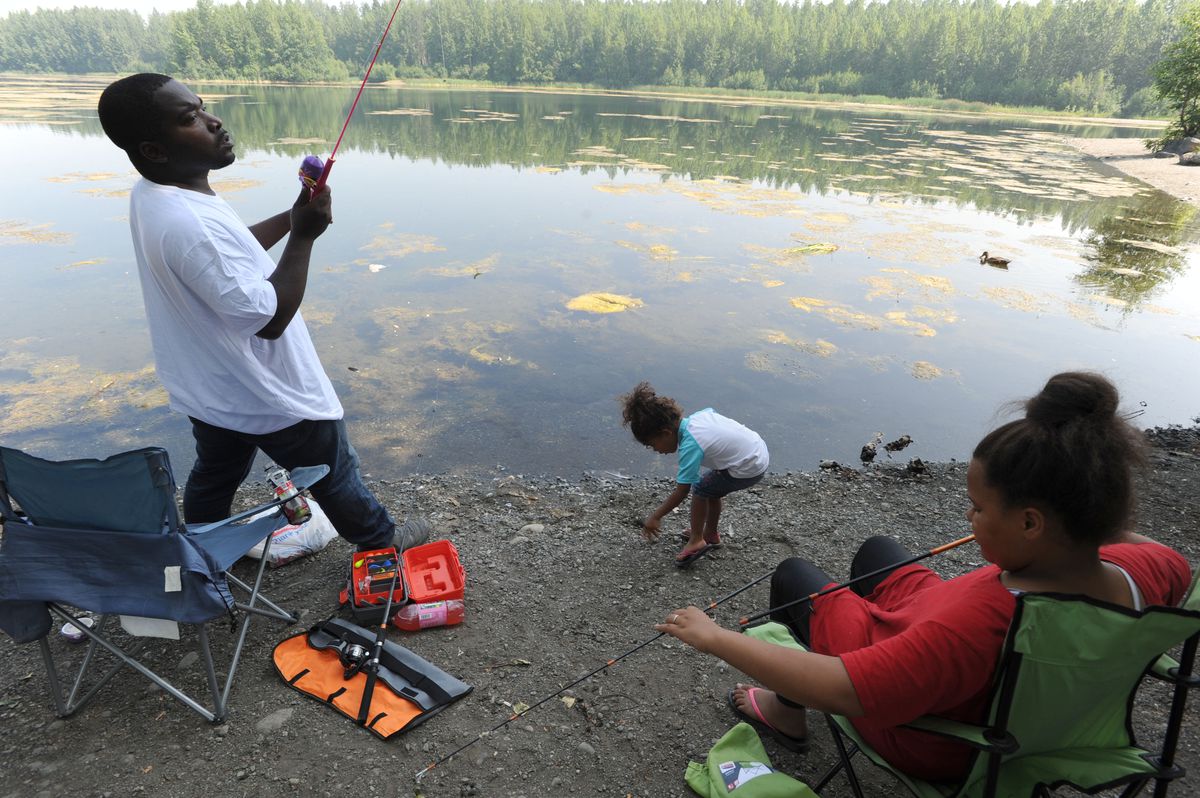 The Hayes family was beating the heat by fishing from the shadows along the banks of Cheney Lake, on Friday, July 5, 2019. Dad, Tanell Hayes, helped daughters Amarianna Hayes, 4, and Amaris Hayes, 11, get their rods baited and lines in the water. (Anne Raup / ADN)

The Hayes family was beating the heat by fishing from the shadows along the banks of Cheney Lake, on Friday, July 5, 2019. Dad, Tanell Hayes, helped daughters Amarianna Hayes, 4, and Amaris Hayes, 11, get their rods baited and lines in the water. (Anne Raup / ADN)

An unusual heat wave ratcheted temperatures in Southcentral Alaska up to as much as 25 degrees above average this week, and while the heat is expected to abate slightly next week, forecasters don’t expect it to reach the average.

The temperature at Ted Stevens Anchorage International Airport spiked to 90 degrees on Thursday, shattering the all-time high of 85 degrees set 50 years ago. (Really it was 89.6 degrees, but standard meteorological practice is to round up, according to the National Weather Service.)

Meterologist Adam Przepiora of the weather service’s Anchorage forecast office attributed the unusual heat to a high pressure system sitting over the region.

The dry, warm weather it brought has sparked wildfires, triggered burn bans and canceled fireworks shows across the region.

Normal temperatures don’t appear to be on the horizon. (The average high temperature for July 5 in Anchorage is 65.) Forecasters expect the high pressure system to retreat north next week, bringing temperatures in Anchorage back down into the high 70s and low 80s by Friday — though that’s still about 10 degrees warmer than the normal range for this time of year, Przepiora said.

High pressure systems aren’t unusual, but according to Rick Thoman, a climatologist at the Alaska Center for Climate Assessment and Policy, there is no one answer for why this one has brought such high temperatures.

Rather, Thoman said, a perfect storm of climate conditions set the stage for the incoming high pressure system to toast Southcentral Alaska.

That doesn’t sound like a lot, but because water is dense and holds a lot of heat, a slight difference in sea temperature can significantly warm the air, he explained.

[RELATED: East Anchorage wildfire expected to be out in 2-3 days, fire officials say]

Local factors are also at play — sea breezes at Ted Stevens Anchorage International Airport, where the National Weather Service records its official temperature measurements for Anchorage, normally make conditions a little cooler than elsewhere in the city. Independence Day didn’t see much of a sea breeze, though.

And underlying all of it, Thoman said, is large-scale warming, which he called “the background the weather is painted on.”

“That gets a little redder every year,” he said.

Putting a high pressure system on top of all that is what gave Southcentral Alaska its record high-temperatures — and this heat wave likely won’t be the last.

“In a warming world, this kind of event becomes much more likely,” he said.

They won’t happen every year, he cautioned, but as they become less rare, Alaskans may have to begin rethinking how they stay cool.